Empress Maria Theresa: an enlightened ruler who recognized the value of education for all

In this edition of our miniseries, marking the 300th anniversary of the birth of Empress Maria Theresa, we look at one of the most important reforms she introduced: compulsory schooling for all, which set the foundations for a centralized education system, the basics of which remain to this day. 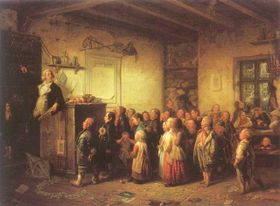 Empress Maria Theresa liked order and this trait was highly prominent in many of the reforms she undertook be it the running of the state administration, the introduction of numbers for houses in place of names which made it easier to find an address or the fact that she ordered the first ever census of the population, albeit concerned only men and cattle in those days. She was equally methodical in introducing compulsory education for all, ordering that all children, boys and girls alike between the age of 6 and 12 years should attend school or receive a private education. Magdalena Šustová of the Museum of Pedagogics says that, while a vast number of people were illiterate at the time, it was actually poverty that prompted the empress to introduce compulsory schooling.

“Soon after ascending the throne Maria Theresa was unwillingly dragged into wars and conflicts and paradoxically it was the consequences of those wars that led her to introduce her school reform. The war left many orphans and impoverished families and created areas which today we would call “socially excluded areas”. Many people had no livelihood and one of the instruments that was to reduce poverty in all the empress’ dominions was education and the reform of the school system.”

Up until then, education was almost exclusively in the hands of religious orders and only accessible to the higher classes. Maria Theresa changed that. She introduced compulsory education for boys and girls across the board, establishing the first network of public schools, and giving them their first curricula by stating what subjects should be taught and overseeing the introduction of the first school book. The reform was not popular with the lower classes, who sent their children to work in the field, but the empress pushed it through with force, threatening to throw parents who refused to send their children to school in prison. The rich, who could afford tutors, were free to secure their children’s education by private means. 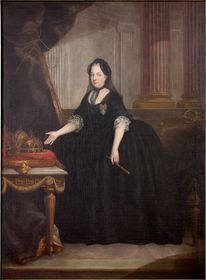 Maria Theresa In introducing the foundations of a modern-day school system the empress looked abroad for inspiration and was not loath to learn from her enemies. Magdalena Šustová again:

“Her biggest inspiration came from Prussia, from the education reform in Prussia. Although she fought against Prussia she was smart enough to learn from them and commissioned a respected Prussian scholar –Abbot Ignaz Felbiger to draft an education reform plan which she then implemented. So her main inspiration was Prussia.”

In 1774 Felbiger came to Vienna and was appointed General Commissioner of Education for all of Maria Theresa’s Habsburg dominions. The school reforms were aimed to create a sense of national unity of the population of the Austrian Empire and set higher education standards. The same year he issued a common school ordinance and in 1775 produced a school methodology book: Methodenbuch für Lehrer der deutschen Schulen. It contained instructions regarding the methodology of teaching, and introduced the practice of questioning pupils. It was a revolution in the field of education, which until then relied heavily on memorizing. In fact, in 1774 there were many teachers who themselves could not read and write.

Schools were gradually established around the monarchy and the education system was centralized. Magdalena Šustová explains:

“Children were taught to read, write and count and they were taught religion – back then it was the Catholic religion but during the reign of Josef II who decreed religious tolerance also Lutheran or Calvin. Compulsory school education lasted for six years. In the bigger towns the schools were of a higher standard and pupils were taught German as a second language, but in village schools pupils were taught in their native language –so here it was Czech or German in areas where the majority population was German. In secondary schools all subjects were taught in German and it was the same at universities. So a higher education meant you had to learn German.”

Despite her busy schedule, Maria Theresa closely monitored the school reform and her own sixteen children were subjected to a demanding regime. She was a hard disciplinarian who controlled every minute of their time, following their progress and sending their tutors lengthy instructions regarding which areas needed to be improved. She criticized their speech, their behaviour, the fact that they slouched or rested their elbows on their desks. In later life she kept up the stream of letters telling her daughters how to improve their marriage and hold their husband’s interest. She insisted that girls be equally well educated as boys with only a few minor differences. 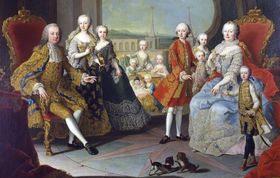 Maria Theresa with family “Compulsory education was the same for boys and girls. The only area where the education differed was in handwork where girls usually took sowing classes or needlework while the boys were taught things like beekeeping and crop growing. But it is true that the foundations for an equal education were laid down by Empress Maria Theresa.”

The education reform is one of the most highly valued reforms introduced by the empress. When she came to the throne the level of illiteracy was very high and although the progress made was gradual historians say that ten years after it was launched seventy percent of children in her dominions attended school. 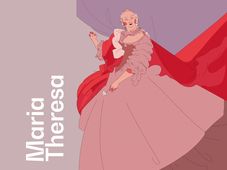 Czech and Hungarian Queen and Austrian Archduchess, who became the only woman in history to rule the Habsburg monarchy. In the New Year, Czech TV will broadcast one of its most ambitious projects to date and its biggest co-production ever: a two-part… 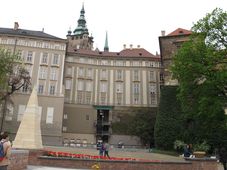 It is arguably the most frequently photographed sight in the Czech capital: Prague Castle overlooking the city complete with St. Vitus’…