Last days: The heroes of Operation Anthropoid at Prague’s Cyril and Methodius Church

Seventy-five years ago, on May 27, 1942, Czechoslovak parachutists dropped into Bohemia carried out one of the most daring actions of World War II, the assassination of Nazi governor Reinhard Heydrich. The heroes of Operation Anthropoid later hid in the Church of Ss. Cyril and Methodius in central Prague, where they met their deaths following a massive SS siege on June 18. Join us on a visit to that church. 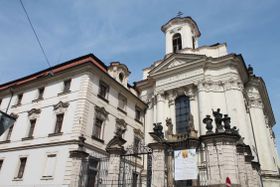 Cyril and Methodius Church, photo: Ondřej Tomšů The parachutists Jozef Gabčík and Jan Kubiš attacked Heydrich’s open-topped car on May 27, 1942. They and their group instantly became the most wanted men in the Protectorate and, fast running out of options, found sanctuary in the Church of Ss. Cyril and Methodius on Prague’s Resslova St.

They were holed up there when Heydrich died on June 4, 1942 and met their own deaths at the church 14 days later after around 750 Nazi soldiers laid siege to it in the early hours of the morning.

Orthodox priest Václav Ježek ministers at the Church of Ss. Cyril and Methodius today and took me around the historic site, which was faithfully recreated in the 2016 movie Anthropoid and draws visitors all year long.

As we stood in the main, upstairs part of the church, Ježek explained how Gabčík, Kubiš and the others had ended up there.

“They didn’t have any other option. That was the reason why they came here. They were looking for various hideouts around Prague but unfortunately they didn’t find any people who would be willing to help them.

“They even asked other churches, priests from other churches around the area, if they could help them hide out in that period. But the only ones who offered them a hideout were the Orthodox people from this church.

“The bishop [Gorazd, who was later executed] was not aware that the clergy had made that offer and only found out about it later. They presented him with a solution that was already in place and just said, We’re hiding these parachutists here.”

When then parachutists arrived, what did they find here? Jan Kubiš, Jozef Gabčík “They found a basic place to hide. The people associated with the church offered them food and shelter. They offered them all the comforts that were possible in that situation.

“But of course it was a very difficult situation, because the church was a public place and a lot of people were coming in and out. The only place they could effectively hide without drawing attention was in the crypt.

“The crypt in this church is very interesting. It’s a big church and the crypt is very inconspicuous – you can’t really identify where it is located.

“So I think the clergy were saying, We can hide them in the crypt very effectively, without people’s drawing attention.

“But of course food and all these things needed for their survival would have to be carried during the day in very secretive ways so as not to arouse suspicion.

“Not many people know that around this church there were a lot of spies, living in the houses around it.

“One eye-witness who is now deceased told me that there was a spy that lived across the street. He didn’t know anything about the parachutists and was just watching the Orthodox church here and giving reports about it to the Germans.

“And interestingly he didn’t see anything with the parachutists. He didn’t inform the Germans. So they hid them so effectively that even people spying on the church didn’t know anything was going on.”

Did they remain in the crypt or did they move between it and this part of the church? Was there a way for them to go up and down? 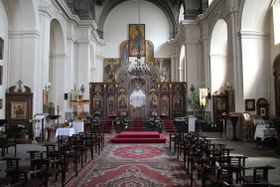 Cyril and Methodius Church, photo: Ondřej Tomšů “Yes, of course there was. And I think they did. We don’t know their movements exactly.

“If you stay in the church during the night you can see that it’s relatively quiet. The windows are high, so there’s no reason to fear somebody is going to see into the church.

“So I don’t think there was any danger of them being seen, without modern technology that we have today, like cameras or something like that.

“Once the doors of the church were closed they had free movement all over the place and utilised it. I think they got to know the church very well during that time.”

Jan Kubiš died, alongside Adolf Opálka and Josef Bublík, after a two-hour gun battle in the prayer loft above where Václav Ježek and I have been standing. Gabčík, Josef Valčík, Jaroslav Švarc and Jan Hrubý committed suicide in the crypt immediately below after various efforts by the SS to force them out.

When we entered the dark crypt, which today houses a popular museum to the Operation Anthropoid heroes, Václav Ježek described the scene on June 18, 1942.

“The Nazis placed the soldiers outside and they initially waited for an opportunity for them to either surrender or to use any other tactic for them to come out. Photo: Barbora Němcová “Then they obviously understood that that wasn’t going to work, so they started using other means to try to get them out.

“But the basic thing was they wanted to get them out alive. Because the Germans were smart enough militarily to know that they needed knowledge from them, to gain other information about possible activities, and so on.

“The primary goal was not to kill them. The films that are out, Anthropoid and so on, are very dramatic. They show huge, intense fighting.

“But the Germans were using all tactics to try to get them out without any fighting.

“Then once they realised that wasn’t going to happen, they used some almost funny ways of get them out, like flushing them out with water.

“They put a big fire hose through this window and put a lot of water inside the crypt and expected the parachutists to give up and come out without fighting.”

Also it looks like through this narrow window at street level the Nazis shot into the crypt – because we can see bullet holes in the wall here.

“Yes. If I’m not mistaken in the two films about Operation Anthropoid, the Czech film and the recent one, there is a lot of intense fighting through this window.

“And I think that’s very accurate. Because the Germans had placed a large calibre machine gun on one of the buildings and they started shooting inside through this window.

“But from a military point of view, I think this was more to try to frighten them. Because, as you can see, the hole is very small and you can’t accurately shoot through it into the crypt.

“I think it was to try to really scare these people into coming out.

“Because I believe until the last moment the Germans were expecting to take them alive. Photo: Barbora Němcová “They needed them alive so they could, for example, display them on the square and scare the local inhabitants.

“They could say, These are the living parachutists who we have captured – and this is what happens to people who fight the Germans.

“I think that was their primary goal. They didn’t want to show them dead bodies of martyrs who were capable of sacrificing themselves, and so on.”

There were seven parachutists. They had been here for over two weeks. Do we know if they felt there was no way out of the crypt or out of the church?

“If you look at them from the perspective of being soldiers, they underwent special training and I think they were hoping for a way out until the last minute.

“I think they weren’t wasting their time here. They were looking for ways to get outside in any possible way.

“Also an interesting thing about this place is that there is some sort of corridor in this area; a local expert on architecture told me that there is a place here that, if they had found it, they could have escaped through the drainage system.

“I’m not exactly sure how the architecture is around this corridor, but apparently it is here and they could have used it.”

Also I was reading that the Nazis tried to force a chaplain named Petřek at the church here to persuade the parachutists to surrender.

“Yes, they certainly did. And I think the fact that they did no anything which would suggest that sort of propaganda activity showed the immense person strength of these people.

“Everybody knew how the Germans behaved during interrogations and all the things that they had been doing in Prague.

“Particularly Heydrich and all the people associated with the Gestapo had a very bad reputation of forcing people to say anything they wanted.

“So to say to the Germans in that situation, I’m not going to publicly call people out for this purpose is, I think, a huge moment to the human strength.” 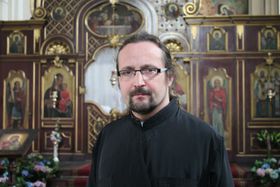 Václav Ježek, photo: Ondřej Tomšů Since we’ve been here there has been a steady stream of people coming in. Typically, who are the people who visit the church and the crypt, and what are they most interested in?

“This place attracts huge crowds of people. If you stay here during the year you see that every day – winter, summer – there are people coming in.

“There are a lot of visitors from the West, who are interested not only in the history of WWII but also in all the historical, sociological and other aspects of the fighting here around this church.

“A lot of people are realising, justly so, that the murder of Heydrich was a really extraordinary thing, under the circumstances.

“It’s also true that during the communist period there were also people who were interested in it. But the Communists were not very keen on displaying this place because it was associated with the Western resistance movement, which they were no so keen to emphasise.

“But today it draws incredible crowds and I think it’s very informative for all sides, to see the history and to feel it. You can feel it here. You don’t just look at the panels in a sort of intellectual way, but you can really feel the place.

“You can really immerse yourself in the atmosphere that’s here and that’s very important.

“Interestingly, a couple of years ago there was a German man here who had been one of the soldiers who were shooting from the outside into this church. He was an elderly man.

“He said he felt regret for all the things that happened and said that the heroes that died here were on a sort of very high level of heroic struggle. Because, he said, the Germans were really putting on a lot of pressure and it was a very difficult situation for the people here.” 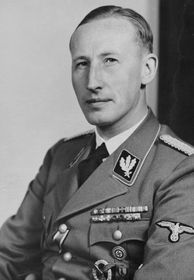 “Any sort of improvement, anything toward the better, anything that can enrich or help humankind always starts from the individual.

“And if he chooses good, I think that his example and his activity is so great in a way on every level that it will improve the fate of those around him and will also inspire others to do that as well. 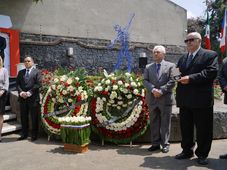