The Regional Museum in Mikulov, in southern Moravia, has opened an exhibition of historic scientific instruments once used at the town’s 380-year-old grammar school. The exhibition highlights the beauty of the elaborate antique objects, and it also shows what role the school, founded by the Catholic order of the Piarists in the middle of the Thirty Years’ War, played in the town’s history. 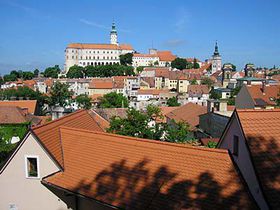 Mikulov The small town of Mikulov, lying in the heart of South Moravia’s wine-making region, sits right on the border between the Czech Republic and Austria. It has flowered after decades of communist neglect, and has since become a popular destination for both Czech and foreign tourists who come to enjoy the wine, and to admire the town’s rich history.

In many respects, Mikulov saw its heyday in the most unlikely of times: during and after the Thirty Years’ War that devastated large parts of Central Europe. At the time, the impressive chateau above the town was the residence of the most powerful man in Moravia: Cardinal Franz Dietrichstein.

The Madrid-born aristocrat began rebuilding the town soon after he became the bishop of Olomouc in 1599. Thirty years later, he carried out an important part of his plan: he founded a secondary school in his town, and invited an Italy-based religious order, the Piarists, to run it. Dobromila Brichtová is the regional museum’s former director. 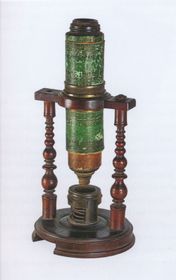 Microscope, photo: Milan Karásek “I think that the pride of a rich aristocrat played a role here, too. He wanted to build up his residential town of Mikulov in all aspects, including the spiritual one. And I think he expected the Piarists teachers, who mostly came from Italy, Germany, Belgium, France, and so on, to bring contemporary knowledge and science to Mikulov and that they would create an intellectual environment of people who you could not find even in Brno, a much larger city.”

Many of the school’s pupils went on to become leading scholars of their time, among them Jan Evangelista Purkyně. It was probably at the Mikulov grammar school where Purkyně first looked through a microscope, on his way to become a capacity in the field of physiology.

An authentic late18th century microscope, in a green paper tube, is among the grammar school’s antique scientific instruments featured at the exhibition at the Mikulov chateau. Astrophysicist Petr Hadrava, who specializes in the history of science, collaborated on the exhibition catalogue. 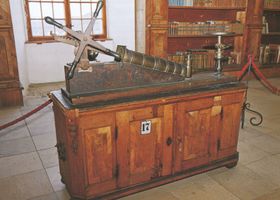 Vacuum pump, photo: Milan Karásek “The same instruments would be used for measurements as well as for demonstrating the basic motions in the firmament. So they also served as learning tools for pupils to understand some of the basic relations in the field, and they dealt with mostly spherical geometry, as well as with the measurement of time, so there are various kinds of sundials.”

Besides historic sundials and microscopes, the museum collection of scientific instruments on display at the chateau’s Baroque library includes compasses, astrolabes, theodolites, terrestrial and celestial globes, as well as instruments designed for experiments with vacuum, electricity and other phenomena. Dr Hadrava says pupils at the Mikulov grammar school were required to understand how they worked.

“It was part of the basic disciplines. It’s interesting that in classical university education in the late Middle Ages and early Modern Era, knowing how to work with some astronomical instruments was compulsory for all scholars. For example, the astrolabe was part of doctors’ equipment. They were supposed to figure out the right time for certain procedures and so on, not all doctors used them of course, but it was part of their education.” 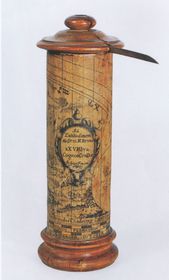 Pillar Sundial, photo: Milan Karásek There are some 60 instruments, made between the 16th and 19th centuries on display at the library, representing most of the school’s original collections. Some of the instruments were used until the early 20th century; by that time, one of the grammar school’s professors had founded the town museum and included the precious instruments in its collection. Petr Hadrava says that was a key move in preserving the unique set for the future.

“The collection might have been quite rich; not every such institution would have had such a collection. But what’s exceptional today about it is that it has been rather well preserved. Most similar sets no longer exist whereas here, some pieces were even added to it later on, so it’s a really nice collection.”

The exhibition at Mikulov chateau highlights the role of the Piarists played in the town’s development and in the recovery of the whole province from the devastation of the Thirty Years’ War. Unlike schools run by other religious orders, most notably the Jesuits, the Piarist schools prepared their students for practical life. Museum’s former director, and one of the authors of the exhibition, Dobromila Brichtová again.

“By the end of the 30 Years’ War, when the whole country was ravished, every land owner needed good, educated and creative administrators of the estates, as well as teachers. And that’s something the Piarists could offer, rather than pure philosophy that is not likely to enchant someone who’s hungry; they offered to teach people how to make a living.” Geodetic astrolabe, photo: Milan Karásek The Mikulov grammar school was run by the Piarists until 1873 when it was included in the state education system. The teaching language was German, as were the majority of the town’s inhabitants. After the war, the Germans were forced out, and the whole area was repopulated with ethnic Czechs and other Slavs.

The communist regime in the 1950s then marked the end of the Piarist order in the Czech lands. Dr. Karel Janoušek is a Catholic priest in charge of the town’s two parishes.

“In our country, the order in fact stopped existing in the 1950s. It is alive in Poland and Hungary, while in Italy they are quite wide-spread. We call them Piarists, but in Italy, they are known as Pie Scuole, or pious schools. They still run schools in Italy although other educational orders later emerged, such as the Salesians. But these paid much attention to religious aspects and taught children how to live a Christian life. Piarists really focused on education as such.”

The only parish in the Czech Republic still run by the order is that of Strážnice, another historic town in southern Moravia. But it was in Mikulov where they set up their first school outside of the order’s home country. Father Janoušek says their focus on smaller towns was particularly valuable. 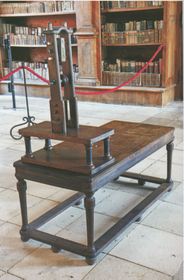 Electrostatic machine, photo: Milan Karásek “The Piarists were not that well known because they were active in smaller towns, such as Strážnice, Lipník nad Bečvou, and others. But it was important because they provided opportunities even outside the big centres such as Brno and Olomouc, for children to get a good education. That was, in my opinion, the Piarists’ main asset in the Czech lands, and particularly in Moravia.”

The man who made it all happen was Cardinal Franz Dietrichstein. As the bishop of Olomouc, he became the governor of the whole of Moravia after the Battle of White Mountain that saw the Bohemian and Moravia protestants’ defeated by the Catholic armies. All those who did not want to leave had to covert to Catholicism; those who chose exile had their property confiscated and sold to Catholic aristocrats.

Cardinal Dietrichstein, who oversaw Moravia’s return to the Catholic faith, grew immensely rich in the process. That was one of the reasons he went down in history as a villain – but Ms Brichotvá says his legacy is much more complex than that.

“In the light of the history of the Mikulov Piarist School, the mythicized figure of the anti-reformation Moravian governor after the Battle of White Mountain suddenly appears as a somewhat more intriguing man than a demonic enemy of non-Catholic faith. 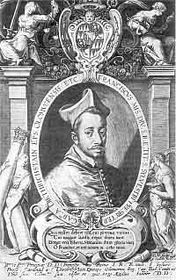 Cardinal Franz Dietrichstein “The man studied in Renaissance and early Baroque Rome; he read Galileo’s books at the time when the Inquisition was investigating him. He was one of the richest men in Moravia, and at the same had a great relation with Phillip of Neri, who was later canonized, and who focused on the education of poor children.”

You can learn much more about the fascinating character of Cardinal Dietrichstein at the Regional Museum of Mikulov. The exhibition marking the 380th anniversary of the Piarists arrival in the Czech lands is open at the chateau until October. For more details, go to the museum’s website, rmm.cz. 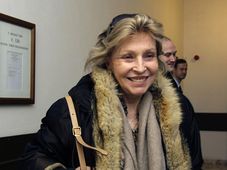 The south Moravian town of Mikulov, located just on the Austrian border, was for many centuries the seat of the aristocratic family… 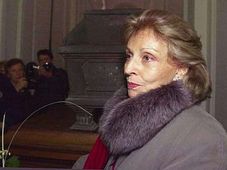 Mercedes Dietrichstein: There were no princesses in the Third Reich

Princess Mercedes Dietrichstein comes from one of the richest and most powerful Moravian aristocratic families that, in the 16th century,…