After the end of the Second World War it was often very difficult to catch and bring Nazi war criminals and their collaborators to justice. Historian Vojtěch Kyncl from the Czech Academy of Sciences has written a new book called Beasts: Czechoslovakia and the Prosecution of Nazi Criminals, which explores the Czechoslovak side of this endeavour. I began by asking him when the allies, including Czechoslovakia, first committed to bringing Nazi war criminals to justice. Vojtěch Kyncl, photo: Jan Ptáček / Czech Radio “Long before the defeat of Nazi Germany, back in 1942, the allied governments agreed to punish Nazi war criminals, both Nazis and their local collaborators. The level of violence was unprecedented in the Second World War and could not be overlooked. There were mass shootings, gas chambers and the killing of children. Actually, 12 million minors were killed in the war. It was beyond all the conceivable rules of humanity.”

If you had to divide the phases of pursuing war criminals after WWII, what would they be?

“In the period between 1945 to 1955 most war criminals were searched, sentenced and then released. A new wave of prosecuting war criminals began both in the Eastern and Western blocs at the end of the 1950s and especially in 1960 after the capture of Adolf Eichmann.

“The largest part of wanted criminals lived in the Federal Republic of Germany, where intensive searches for and investigations of criminals took place between 1965 and 1980. In East Germany and Austria the search was more or less random.

“The third wave of criminal prosecutions opened after the fall of the Iron Curtain, because the exchange of information was greatly simplified and some propaganda and political barriers fell.”

“Czechoslovakia had information on the war crimes [that war criminals living in Germany] committed, so if these people could be blackmailed, West Germany or Czechoslovakia could use them as agents in the other country.”

You mention the Iron Curtain which existed for more than 40 years after the war. What role did the Eastern bloc play in these efforts? And, in this specific context, Czechoslovakia?

“Here, four states took the initiative to prosecute war criminals. Primarily it was Poland, which suffered the greatest losses. The other three were Czechoslovakia, East Germany and the Soviet Union.

“Each of these states led prosecutions with different motives. However, the main motivation was mostly foreign policy and propaganda benefits for their communist regimes against Western democracies.”

You mention foreign policy and propaganda purposes. I was wondering, was the prosecution for war crimes slowed down in certain cases precisely because intelligence agencies could use these criminals’ past as a sort of kompromat to secure them as agents? 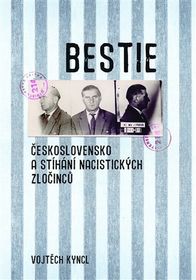 Photo: NLN - Nakladatelství Lidové noviny “Czechoslovakia had information on the war crimes they committed, so if these people could be blackmailed, West Germany or Czechoslovakia could use them as agents in the other country.”

During the period right after the war, between 1945 and 1947, a total of 132,549 criminal complaints were issued in connection to crimes committed on Czech lands during the war. Is it possible to say how fair these proceedings were in light of Czech-German animosity?

“During this period, approximately 40,000 of these complaints ended up pending before the courts.

“We can say that in this turbulent time certain principles of the rule of law were still respected. However, the quality of the decisions was very different and depended on the level of the local courts.

“In total, over 700 offenders were executed and over the same number was sentenced to life imprisonment. It was actually one of the hardest post-war retributions in Europe.”

What was the sort of majority crime that was reported?

“Most of them were related to the defendant being an accomplice to a murder either in prisons or at executions. However, a number of criminals were also denominators and confidants.”

“It is interesting that among all of these war criminals we cannot detect any sexual deviances or anything that could explain their brutality or sadism. It is interesting.”

You have 90 profiles of war criminals in your book. Is there any crime which particularly shocked you?

“It was the murder of 21 Hungarian Jews near Mikulov – half were men and half were women, including a ten-year-old girl.

“A group of local German gendarmes brought them from a nearby brick factory to dig graves and shot them there. It was April 14, 1945. Just a few days later the Red Army arrived in the city.

“Some of the perpetrators have described their behaviour in detail and only one was sentenced to 5 years in jail after the war. The other perpetrators were released in West Germany during the 1960s.

“Why such brutality at the end of the war? The Germans could hear the Red Army units only a few miles away and there was no reason to kill these people. They did not just use their guns but also sticks to kill them. It was very brutal and took some 15 minutes to carry out. The last victim was the 10-year-old girl.” 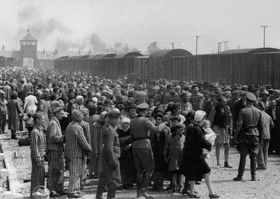 Auschwitz-Birkenau death camp, photo: archive of Yad Vashem, Public Domain There was a passage in this book where you talk about Alexander Kerebelec, a guard at a Nazi concentration camp who killed many people and was sentenced to jail in the 1960s. During the investigation some characteristics were analysed which typified such guards apparently. For example, low intelligence and a need to impress their German superiors. I was wondering did the Nazis specifically target such people or is there simply a natural tendency for such people to be selected?

“Alexander Kerebelec was found in 1964 and this man was a guard in Mauthausen concentration camp. He is a very interesting person, because after the war he was in a normal family, had five children and was employed in a factory in Northern Bohemia. He was absolutely normal.

“However, during the war he killed hundreds of polish people at this concentration camp. His only psychological profile was conducted during the investigation and no deviances were detected in his personality.

“Today we know what sequence of circumstances led to the start of the war. What manifestations of human hatred society tolerated and let grow up. Criminals can appear anywhere, at any time. States are obliged to prevent such manifestations of hate at the very beginning and not wait for everyone to overcome their heads.”

“It is interesting that among all of these war criminals we cannot detect any sexual deviances or anything that could explain their brutality or sadism.

“We can repeat such crimes in our societies, because the crimes are not dependent on peoples characters, or their deprivation. Rather it is dependent on the political situation and the leanings of society.”

On the rear side of the book’s cover there actually is a warning that such crimes can happen again. Do you see this as more possible in the current international climate when multilateral cooperation is being tested by some world leaders and the shift to renewed multi-polarity?

“Today we know what sequence of circumstances led to the start of the war. What manifestations of human hatred society tolerated and let grow up. Criminals can appear anywhere, at any time. States are obliged to prevent such manifestations of hate at the very beginning and not wait for everyone to overcome their heads.”