For six years during the Second World War, Prague was the capital of the Protectorate of Bohemia and Moravia, established by the Nazis in parts of the former Czechoslovakia. A new book entitled A Guide Through Prague Under the Protectorate now offers a detailed look at the map of the capital during those dark times. If you ever wondered where the paratroopers spent their last night before they assassinated Reinhard Heydrich, where Czech resistance fighters secretly met, or where Nazi top officials lived during the war, the book has all the answers. 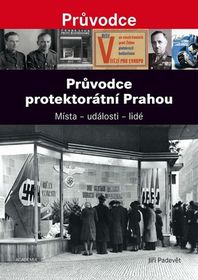 Photo: Academia publishing A German film newsreel from March 1939 announced the arrival of Nazi troops in Prague. For the next six years, the city was under German occupation along with the rest of Bohemia and Moravia. Thanks to its geographical location, Prague was largely spared from wartime destruction, with the exception of few air raids and fighting which occurred towards the end of the war.

But behind its calm façade, the city was living out a drama. Thousands of its inhabitants, who stood up against the occupiers, lost their lives and many more spent years in prisons and concentration camps. Over 35,000 Jewish people who lived in Prague before the war were murdered in the Holocaust. The city also witnessed some heroic acts of resistance including the assassination of the prominent Nazi, the acting Reichsprotektor Reinhard Heydrich by Czech paratroopers in 1942.

A new book now takes a closer look at wartime Prague. On some 800 pages, the Guide Through Prague Under the Protectorate provides detailed information about hundreds of locations in the capital that played a significant role during the Nazi occupation. The book is the work of Jiří Padevět, the director of the Academia publishing house.

“I think the book will do a great service to anyone interested in the Protectorate and WWII because they will find a lot of information there that will lead them further. It’s not a book that will just help you plan a walk through the city; it offers a history of Prague during the Protectorate but in a different form.”

The large volume is divided into 11 sections, roughly corresponding to the city’s districts from the central Prague 1 to the outskirts. The guide includes some of the major sites such as Prague Castle and other important places, as well as dozens of locations scattered around the city centre and beyond. I asked Mr Padevět about his approach.

“If a clandestine apartment was really clandestine, I naturally did not find it either. But I proceeded from the centre outwards. First I processed the best-known sites such as the Petschek Palace, the so-called Heydrich’s curve, the Kobylisy execution site, the Pankrác prison, and so on. 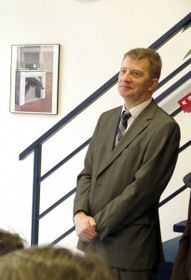 Jiří Padevět, photo: archive of Academia publishing “After I covered these places, using both archive material and existing literature, the stories of the people involved led me further. For example, Heydrich’s curve led me to supporters of the Paratroopers; the Pankrác prison showed me stories of the people before they were arrested, and so on.”

Visitors on their way from Charles Bridge to Prague Castle pass the Baroque church of St Nicolas in Malostranské náměstí. In an apartment located just across the road from the church’s main entrance, Jan Kubiš and Josef Gabčík, the two Czech special agents sent in from Britain to assassinate Reinhard Heydrich stayed for a few days in May 1942.

The Czech commandos, along with other Czech soldiers airlifted to the Protectorate, often changed their place of refuge. The last week before the assassination which took place on Wednesday, May 27, the paratroopers were hiding in a flat in Kolínská street, in Vinohrady.

Less than a month later, the family which provided them with shelter was arrested; in October, the couple and their two young daughters were executed.

Jiří Padevět says that wartime Prague saw hundreds of stories like this, but he could not include all of them in his book.

“I imposed no limits on the scope of the book. The only limits were technical – the book was growing and eventually became too big. Today I think I would have enough material for another volume. There are so many stories that they don’t fit into one book.

“The book originally focused only on the resistance but then I included the other side, the police and security forces. And I ended up covering the Protectorate government and the authorities in general. And I also included theatres, cinemas and other sites related to the resistance.” 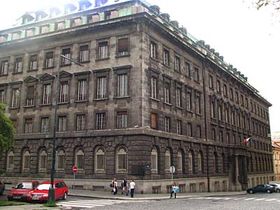 Petschek Palace, photo: Kristýna Maková The guide also lists the homes of Nazi officials including the infamous state minister Karl Hermann Frank. It provides detailed information on the locations where resistance workers met. But the book also reveals the wartime addresses of Czech film stars, writers, and other public figures. Jiří Padevět says there were marked differences between various districts of the city.

“Prague 6 was an area where a lot of army officers lived so the first wave of arrests of members of the Nation’s Defence group took place primarily there. Pankrác, Michle and Nusle, on the other hand, were predominantly working class districts which is why left-wing resistance groups were active there.

“The area around Prague Castle had many German institutions while Vysočany and Hloubětín had many factories that produced weapons until April 1945.”

The residential district of Bubeneč, located in Prague 6 and 7, with its villas and luxurious apartment complexes, was popular with Nazi officials, according to Jiří Padevět.

“Bubeneč was a very popular area. The villas that now house foreign embassies were homes to many Nazi top officials from the SD and Gestapo. Also, the so-called Molochov building in Letná, built before the war as a luxurious apartment complex – that’s were the top Gestapo officers lived.”

Interestingly, the Molochov complex became home to many communist officials after their party took power in 1948.

I asked Jiří Padevět if he came across any new discoveries while researching his book.

“I don’t think I made any discoveries as such. But I did manage to localize some sites, for instance many apartments that were only known to have existed in a particular street, or somewhere in Dejvice; I searched through police registers and found out the exact addresses. 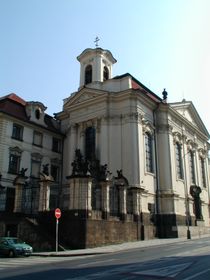 Church of Saints Cyril and Methodius in Resslova street, photo: archive of Radio Prague “I also localized places that no longer exist, for example a German military cemetery in Šterboholy which was destroyed immediately after the Prague Uprising. I also established the addresses of some Nazi officials. But there are many places yet to be found.”

Some of the places included in the guide, such as the church in Resslova street where the paratroopers were in hiding after Heydrich’s assassination, are now maintained as monuments and are open to the public. But other sites are considerably less known – such a secret birth clinic in Vinohrady that was run by the Gestapo.

“I think one of these places is a villa in Dykova Street which for about a year served as a secret birth centre run by the Gestapo. They brought women prisoners from the Ravensbrück concentration camp, women from Lidice, and others, to give birth here. Their newborn children were taken away from them immediately after birth, and the women were sent back to the camp, and the children were given German names. That was one of the most terrible things that happened here.”

The book’s time frame ends on May 9, 1945 when Soviet troops arrived in Prague, making an end to the wartime suffering. An uprising broke out in the city four days earlier, and the guide also lists some important sites related to the fighting.

“I think that people generally know about the events around Old Town Square which was under attack by the SS located in the building that today houses the law faculty at the end of Pařížská Street. 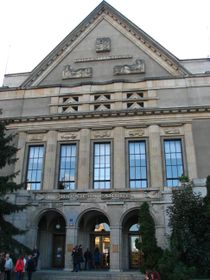 Law faculty of Charles University, photo: Kristýna Maková “Heavy fighting also took place on the route from Chabry to Prague through Kobylisy and on the Barricaders’ Bridge. German troops were trying to get out of Prague, and after some heavy fighting they seized the bridge and eventually managed to leave Prague and reached the US zone in west Bohemia.”

The guide naturally contains maps of the individual districts as well as many photographs depicting the places and people included in the text, or illustrating the atmosphere of the city. However, the guide is only available in Czech, and Jiří Padevět says that for the time being, there are no plans to put out an abridged English edition of the book.

The episode featured today was first broadcast on November 16, 2013.