Prague’s Antonín Dvořák Museum recently reopened after renovation with a new programme dedicated to the life and work of the famous composer. Entitled The journeys of Antonín Dvořák, it offers a new look at the composer’s stays abroad. It also features an exhibition on Dvořák’s Czech-American friend and collaborator, Josef Jan Kovařík, who worked with Dvořák during his stay in New York. 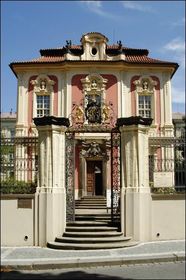 Antonín Dvořák Museum Visitors have to make a little extra effort to reach the Antonín Dvořák Museum in Prague. Located in the New Town, you have to cross a few busy streets to get to it. But once you leave the urban noise and bustle behind, you’ll find yourself in a quiet area with rows of somewhat stern 19th century hospital and university buildings. It therefore comes as a bit of a surprise when you come across a slender and graceful Baroque villa which houses the museum dedicated to the famous composer. Kateřina Nová is one of the museum’s curators.

“The general idea of the exhibition is Dvořák’s journeys. That’s because Antonín Dvořák travelled so much during his life compared to his contemporaries. Therefore, the first part of the composition is called The Journey to Prague, and is dedicated to his studies at an organ school and his first works and compositions.”

Born in Nelahozeves, a small town just north of Prague in 1841, Dvořák came to Prague at the age of sixteen. At the organ school, which also taught composition, the young Dvořák created some of his first works including Preludium in D Major which was publicly performed in July 1859.

On the first floor of the lovely villa, visitors can also see some of Dvořák’s original music scores as well as some of his personal belongings including his desk and chair.

“This is some furniture from Dvořák’s study which wase donated to the museum by his widow, Anna. We can also see Dvořák’s spectacles, his watch and some other personal belongings, like this ink pot and ink stand.” 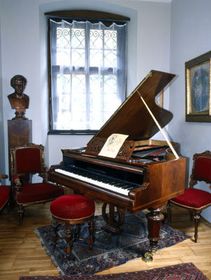 Photo: CzechTourism One of the museum treasures is Antonín Dvořák’s piano made in 1879 by the Viennese firm Bösendorfer.

“We are lucky to have his piano which he played in his study in Žitná Street.”

Do you play the piano?

Well, could you perhaps strike some keys for our listeners?

Moving on, curator Kateřina Nová explains that another section of the new exhibit deals with Anotnín Dvořák’s rise to fame.

“The second part is dedicated to some of his most popular pieces such as the Moravian Duets and the Slavonic Dances. These compositions made him famous internationally, so we called this section Dvořák’s Journey to Europe.”

After years of struggling to make a living, Dvořák received a generous stipend from the Viennese government which allowed him to dedicate more time to composing. The 1870s were a happy time for the young family until tragedy struck. In 1877, both of their children died. Broken by grief, Dvořák created what was to become of one of his best-known opuses – Stabat Mater. 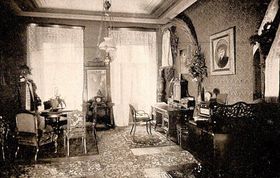 Apartment in Žitná Street It was at this time when Antonín Dvořák and his wife moved to an apartment in Žitná Street, in Prague’s New Town, which is very close to the museum. The Baroque building itself has in fact no connection to the composer bar the fact that he lived nearby, and probably passed the villa many times on his frequent walks.

Built by one of the masters of Bohemian Baroque, Kilian Ignaz Dientzenhofer, between 1717 and 1720 as a summer retreat for a Czech aristocrat, the building changed hands many times before Antonín Dvořák’s museum was founded here. Kateřina Nová explains.

“The museum was founded here in 1932. Before that, the building served various purposes. It used to be a restaurant, a shop, the country’s first secondary school for girls Minerva, and others. But when the Antonín Dvořák Society looked for a suitable space for the museum, they rented it from the city hall and established the museum here.”

The next part of the permanent exhibit follows Anotnín Dvořák on his famous journey to the United States. Dvořák arrived there in 1892 as a famous composer to take over the National Conservatory of Music of America in New York. The museum exhibit features some documents from his time, including a sketchbook where Dvořák recorded some of his pieces from this time. 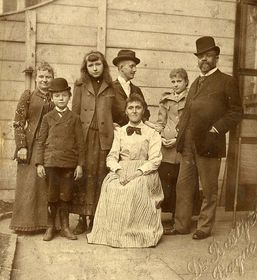 Antonín Dvořák with his family, J. J. Kovařík in the center, photo: Antonín Dvořák Museum “Here you can see his sketchbook with motifs from his American compositions. There is also a photo of his family and his friend Josef Jan Kovařík and a photo of the conservatory¨s founder, Jeannette Thurber.”

Antonín Dvořák stayed in the United States for three years. He received a very nice salary – 15,000 dollars a year according to the exhibit – but he still decided to return because of his family – Dvořák and his wife had six children by that time.

“I think he liked the United States. But he missed his family who stayed behind in Prague, and he also missed the Czech landscape, and so on. He was of course satisfied in the US but he still wished to come back home.”

Did he ever consider moving his family to New York and staying there?

“Not really. When you read his correspondence, you see that he missed the Czech lands, the language, the food, everything.”

“Well, he did speak English. We know that because he travelled many times to England – he was there nine times conducting his pieces. Also, the correspondence with his English publisher is in English.” 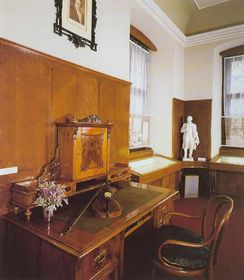 Antonín Dvořák Museum When Antonín Dvořák left for the United States, he was not alone. He was accompanied by his friend and collaborator Josef Jan Kovařík, an American Czech, whom he met in Prague and who served as his secretary during his stay in America. The new exhibition, located on the museum’s second floor is dedicated to Josef Jan Kovařík whom Dvořák affectionately referred to as “Indian”

“This Indian, Josef Jan Kovařík, was Dvořák’s close friend and collaborator. They spent three years in New York together, and Kovařík worked as Dvořák’s secretary; he helped him with everyday tasks, with official correspondence and so on.”

Kovařík came from Iowa where his parents had emigrated from the Czech lands. As a gifted musician, he came to Prague to study music.

“He went to study at the Prague conservatory at a time when Dvořák was considering going to New York. So they met in Prague, and Dvořák asked him to postpone his departure, wait for him and be his guide.”

Josef Jan Kovařík even invited Dvořák to his home in Spillville, Iowa where Dvořák wrote some of his American compositions.

“In the summer of 1893, Kovařík invited Dvořák to Spillville, and they spent two months there. During his stay, Dvořák composed his famous American Quartet and Quintet. He enjoyed his stay; he liked the town and the landscape around it.” 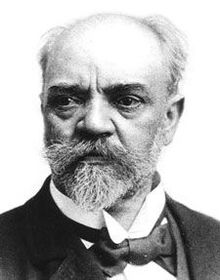 Antonín Dvořák After Dvořák’s return to Prague, Josef Jan Kovařík went on to become a respected violinist in the United States, and his death in 1951 was even reported in a New York Times obituary a copy of which is also featured in the exhibition. Visitors can also listen to some of Dvořák’s most famous pieces including some remixes of his works by Romanian artists from a recent project by the Czech Centre in Bucharest. More information about the museum, its location and opening hours can be found at the National Museum’s website, nm.cz. 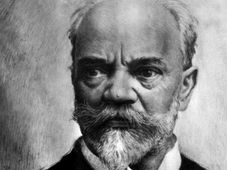 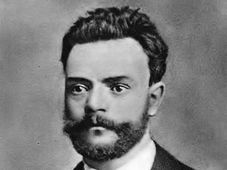