A plaque was recently unveiled in Prague honouring one of the modest heroes who were instrumental in organising the evacuations of hundreds of Jewish women and children out of Czechoslovakia before the onset of World War II, where they would otherwise have been wiped out in German concentration camps. The name of the heroine is Doreen Warriner and her story is one of extraordinary resourcefulness and moral virtue. 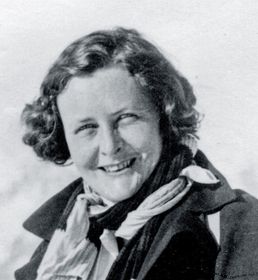 Doreen Warriner, photo: archive of Henry Warriner The story of the Czech Kindertransports which were instrumental in moving hundreds of Czechoslovak Jewish children into safety in Britain before the onset of World War II is relatively well known, particularly through the story of Sir Nicholas Winton.

Sir Nicholas remained modest about his achievement until the end of his life and always insisted he was part of a larger group.

Hidden documents recently shed light on the story of one of those team members - Doreen Warriner.

Just as Winton, Warriner never talked about what she did and the details of her contribution may have been forgotten had it not been for her nephew Henry Warriner, who came across her diary and other papers enabling him to reconstruct her story.

Recently, he and other relatives of those who made up the humanitarian group visited Prague, invited by Foreign Minister Tomáš Petříček, who unveiled a plaque commemorating Doreen Warriner at the entrance to Hotel Alcron, a residence where she used to be a regular guest during the 1930s.

I caught up with Mr. Warriner and asked him how his aunt came to be in Czechoslovakia at the time.

“She first came to Czechoslovakia in 1930. Her work was basically the economics of peasant agriculture and she came to Prague because it was a good place to start. In 1930, in her diary, she says she went to a debate of the Czechoslovak Parliament which shows us that she could already understand Czech at the time. She spoke German as well which came in handy later, because a lot of her PhD was based on research in Germany. She spent the 1930s as a lecturer at London University, but she also travelled extensively in Central Europe and had a lot of contacts in Prague.”

At the time that Doreen Warriner first came to Czechoslovakia, she was a student in her twenties. She quickly picked up German and Czech. Her research also brought her in contact with the then minister of agriculture Emil Hodža, who would later become prime minister. The two struck up a close acquaintance and apparently even had an affair for a time.

When she was not researching in Central Europe, Doreen Warriner would lecture at London University.

It was while she was in London that the Munich Agreement was announced to the public, a deal in which four of Europe’s major powers pushed Czechoslovakia into ceding its western borderlands, which had a predominantly German population.

A feeling of shame about what had happened was one of the reasons why she decided to come back to the country just two weeks after Munich, says Mr. Warriner.

“She knew the politicians, the people at the British Embassy, so I think she really felt she could make a difference. I think she also felt that the Czechoslovaks had been let down by the Munich Agreement. While the majority of people in Britain at the time thought it was good because we were not going to have another world war, some, including her, thought it was a disgrace. I believe that many of the people who came to Prague felt that way too, feeling partly responsible for what had happened.” 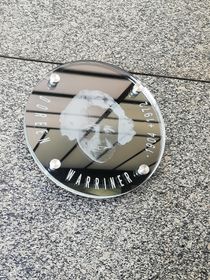 Memorial plaque at Hotel Alcron, photo: Mojmir Churavy, CC BY-SA 4.0 Taking up residence in Hotel Alcron, Ms. Warriner became a regular visitor to the refugee camps which housed thousands of Czechs and democratic Germans who were seeking a new home after the Third Reich’s seizure of the Sudetenland.

She also met with her Czechoslovak politicians and her contacts in the British Embassy. Mr. Warriner says she soon acquired another vital resource – money.

“She came here and brought money from a British charity called 'Save the Children' she also had money from various political figures. Then she was also given control of money sent from two organisations in Britain which had collected a substantial amount of money at the time. One was from the Lord Mayor of London, who had a fund. The other was from a newspaper called the ‘News Chronicle’, which also had a fund. She had a check book, so she could quickly direct the money where it was needed.”

Her check book is still among the possessions of the Warriners and its entries testify to hectic activity.

Originally, Ms. Warriner was primarily looking to secure warm clothing and coal for the refugees. However, she soon realised that more decisive steps would have to be taken and looked into how the most vulnerable of them could be moved to safety.

“I think that because she was ready to push, she was able to start securing visas. Back then getting one was a big problem. If you wanted to get a visa, your details would have to be sent to London by post, then the Foreign Office would have to look at them and send them back – a process which took a long time and it was done name by name. I think she was very instrumental in speeding up the system and she went to London quite often for this purpose, as well as to Poland and Germany.“

It was in this area that her contacts within the British Embassy were particularly useful, as local officials also eager to help compiled refugee lists to speed up the process in London. Those refugees who were on Ms. Warriner’s list had a bigger chance of getting their applications accepted.

It was no easy effort, her nephew says, because Britain was not a wealthy country at the time and there wasn’t a willingness to accept new refugees who would burden the economy.

“They were worried these people would take jobs from workers. Actually, if you look at the records, the Australians the Americans and the New Zealanders also did not want to accept people, because there was such high unemployment at the end of the 1930s.“

Doreen Warriner became the head figure in the British Committee for Refugees from Czechoslovakia, which had its office in Prague‘s Voršilská street. It was she who alerted the attention of Nicholas Winton to the plight of refugee children.

However, the efforts of Warriner and her team were thwarted in March 1939, when the Reich occupied the rest of Bohemia and Moravia, setting up the Protectorate. Just before the arrival of German tanks into Prague, Ms. Warriner managed to secure visas for hundreds of women and children who left on a train for the UK. 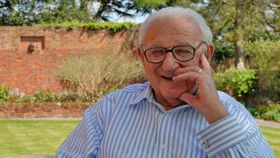 Nicholas Winton, photo: Czech Television She then destroyed the documents in her office in order to prevent the Gestapo from finding out her Czech contacts and moved into the British Embassy.

In the following weeks, Warriner continued helping those whom she could, sometimes using false passports to get them through German border checks.

Eventually however, she had attracted too much attention from the Gestapo and was forced to leave Czechoslovakia in late-April 1939.

Doreen Warriner was awarded an OBE in January 1941, but it seems she never talked about her extraordinary humanitarian effort. She continued her successful academic career, eventually becoming a professor at the London School of Economics.

Why was Doreen Warriner so modest? Her nephew believes it may have also been due to the sheer weight of events during the period she lived in. Britain became engaged in the war just a few months after she left Czechoslovakia and there was a need to focus on other things.

In the end, Henry Warriner found out about his aunt’s extraordinary contributions after her death through a newspaper obituary and the speeches of her former colleagues at the funeral.

He thought that there was no way of finding out more about her story, but that changed when his mother suddenly told him she had his aunt’s personal documents.

“I did nothing for about 20 years and then there was an exhibition about Jewish survivors in Vienna. A very small exhibition held by an organisation that helped Jewish survivors and they got in touch with me, so we went over there. My mother, who had been Doreen’s sister-in-law and was her executor, suddenly revealed that she had kept various documents which she had never produced before. I had thought that there was nothing you could actually find out about this story, but then it became obvious there were lots of records and there were people who had written books and lots of survivors.“

His research, which included interviews with survivors and people involved in the rescue effort is set to be published under the title ‘Doreen Warriner's War’ in August of this year.

He says that during his research he also came across a shocking revelation.

“I was told that in the National Archives in London there were a lot of records from the Prague Embassy, which were sent back and forth. And, quite out of the blue, the British security services released a series of documents related to Doreen Warriner, the refugee agency in London and various other people. We did not know these existed so we did not ask for them. We did ask for documents that were closed for many years and sometimes they did release them, but much of the text was blackened. I have no idea why there was a need for that after so many years. 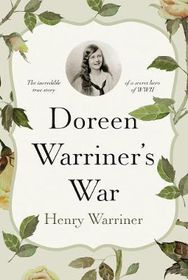 Photo: Book Guild Publishing Ltd “These security documents talk about those who were involved here. I don’t think these records ever led anywhere. I don’t think they affected what happened to her. They could have said Doreen Warriner was a communist, which she wasn’t, her diaries make it quite clear she was a paid up member of the Labour Party her whole life. The Americans would let her work in New York where she worked for quite some time. Yet they obviously didn’t because she was allowed to work there.”

What period are we talking about here?

“We’re talking about the period through the war and then certainly a lot during the 1940s, because she went a lot of times to Central Europe working for a British news magazine. They record the day she left, the day she came back and in some cases what was in her suitcase, because they searched it. You wonder for what purpose but I can’t answer that. “

“They accused her of being mentally unstable, chasing men and doing all sorts of things. I don’t think any of that is necessarily true and I would be very interested if anyone else could comment.”

Mr. Warriner says he asked Czech archivists about documents relating to Doreen Warriner and was told there are likely to be many of them, but they have not yet been indexed or researched. He says that if he could speak Czech he would be very interested in looking at them. Little-known hero Doreen Warriner honoured in Prague: “She did something amazing, but she didn’t seek recognition”

A plaque to the previously little-known Doreen Warriner has just been unveiled in Prague. The Englishwoman saved the lives of hundreds…