Ivy Kovandová is one of the few remaining so-called war brides in the Czech Republic. ‘War brides’ are Englishwomen who married Czechoslovak pilots or soldiers stationed in the UK during WWII – an estimated 10,000 soldiers and about 2,500 pilots from Czechoslovakia fought alongside the allies, and many of them married local women. Some of those women accompanied their husbands back to their native land after the war. But most left Czechoslovakia due to the strain that the arrival of the communist regime placed on their lives, or simply because they felt lost and homesick. Ivy Kovandová, however, still lives in her cozy apartment in Prague’s Vršovice neighborhood and says she has never even considered leaving. Just a few weeks ago, she celebrated her 90th birthday. I recently visited Ivy at her home, where she told me all about her adventurous life over cake and coffee. 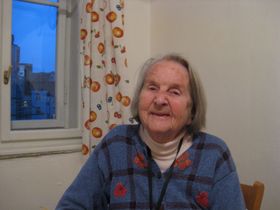 Ivy Kovandová “I was born on the coast, near the sea. We used the coast as our playground in good weather. The sea was so cold that we were never allowed to bathe in the sea itself, only in the little lakes that it made when it came in.”

When she turned 85, Ivy’s children gave her a very special gift – they published her memoirs, under the title “Tapestry – from Suffolk to Prague”. The book covers nearly seven decades of her interesting life. Here is a passage from the chapter on her childhood.

It was ten months to the day after Mum and Dad married that I, Ivy Norman, was born in a little rustic, thatched cottage, with diamond-shaped leaded windows at Covehithe on the cold east-Suffolk coast; an area of splendid isolation. There was no shop, no school or doctor in this seaside hamlet of about thirty souls, the nearest being three miles away.

Ivy was from a poor background, and says she has always been intensely aware of social injustice. The epigraph to her book reads:

Daughter of a Suffolk farm laborer and of a mother from a family of North Sea fishermen, asked at the age of seven ‘Why are there rich and poor?’ ‘There always will be, Ivy, and we were born poor,’ said mother. An answer she mulled over with her little brother and decided that when they grew up, they would ‘try to put things right’. 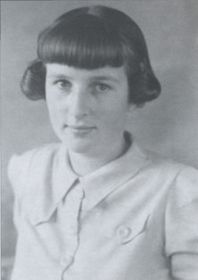 Ivy Kovandová aged 18 In 1938, British Prime Minister Neville Chamberlain signed the Munich Agreement, permitting Nazi Germany to annex Czechoslovakia’s Sudetenland. A year later, the former Czechoslovak president, Edvard Beneš, established the Provisional Czechoslovak Government with Paris its capital-in-exile. Yet another year later, in 1940, unsuccessful negotiations over its diplomatic status, as well as the impending Nazi-German occupation of France, forced the Czechoslovak government in exile to withdraw to London.

Ivy was a young woman when all of these tumultuous events were unfolding – she was only 17 when the war erupted. In 1941, she started working as a radar operator. In her book, she recalls the day she decided to join the forces.

It was one afternoon in August 1941, when in Lowestoft town center, I answered the call of Lord Kitchener, having noticed him pointing his finger at me from a recruiting poster, demanding ‘ARE YOU DOING YOUR BIT TO HELP YOUR COUNTRY?’ ‘No!’, I said to myself, ‘No, I’m not!’ And with no further ado walked into the recruiting office.

There, I was asked which of the forces I would prefer. ‘Wherever I am needed most’, I replied. Such a spontaneous reaction seems quixotic today. It was not only an urge to help the country that moved me to join the armed forces but the thought of so many small countries not standing a chance against that mighty war machine. Ivy Kovandová, Oldřich Kovanda As she told me recently, Ivy was very eager to join the forces, something that was not unusual in those days.

“I was 17, and I couldn’t get into the forces early enough. My brother joined, he was younger than me and gave a wrong age to get into the navy. And when I was 18, I joined the army. I was working on the radar, the first radar that ever came out, the first, then the second and the third. And then I left after three years because I became pregnant.”

Ivy met her husband, Oldřich Kovanda, with whom she was to have four children, in 1942. Even though that was seventy years ago, she still recalls the story of how they met.

“It happened on the train. I was going back from leave, from the East Coast to London, and that train was ordinarily full. And then we stopped at the first capital city, that was Ipswich in Suffolk, and the Czechs got on, so many Czechs, I thought ‘This is going to be terrible.’ But I had my newspaper there and I didn’t bother very much. And then one Czech stood by my wagon seat, and just kept staring at me, and I could still blush in those days.

“I kept blushing and wishing he’d go away. And then I said: ‘Do you speak English?’ and he said ‘Yes.’ So I said: ‘Perhaps you’d like my paper.’ So I gave him my paper and he gave it back to me after a few minutes and he had written on it: ‘I would like to know you better.’ So I wrote back and said: ‘I’m not interested in knowing you, I have a boyfriend and he is very jealous.’ And my husband-to-be said: ‘If he is jealous, drop him at once. Jealousy doesn’t bring any happiness.” 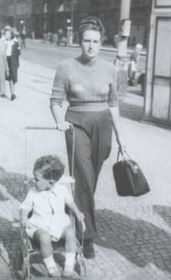 Ivy Kovandová with her son Karel It took some convincing for Oldřich, but he eventually managed to get Ivy to at least write to him.

“But I didn’t reply to that. And then we got to Liverpool Street, and the train emptied. I kept sitting in my seat thinking: ‘The Czechs will all be gone.’ And I was the last one to get off the train, but there was my future husband waiting to help me off and all the Czechs had gone. So he said: ‘Would you like to get a cup of tea with me?’ And I said: ‘No I have no time, I have to go to camp and I have a long way to go.’ I was going to the north of England.

“And so he said: ‘Will you write to me?’ and I said: ‘Yes I’ll write you when I get back.’ So when I got back to camp, I wrote to him at once. I wrote, I promised to write to you, so here is the letter. And the boy I left behind, I told him we couldn’t go on like this, I gave him some reason I don’t remember what. So he was quite upset. And then, with my husband, we kept writing almost every day, about the most interesting things, education, and politics and so on.”

Because of her family background, Ivy did not get to enjoy a full education. She says that most of all, she was fascinated by her husband’s intellect and interests.

“I left school at 14 in tears, because I had only just learned how interesting mathematics was. And because I couldn’t stay on, I was very upset. So I trained as a domestic servant after school. Have you ever seen the movie Upstairs, Downstairs? That was the sort of thing I experienced when I left school, for 2 or 3 years. In view of that, my husband fascinated me. I was not in love with him at all, I just found him very interesting. Oldřich Kovanda “And so he came to meet me in London when I went back to see him, because he had been confined to barracks for something, I don’t know what he’d done, something against the rules, not being as clever as I was, because I used to do a lot of things that were against the rules, but I always got away with them.”

Ivy always liked swimming against the tide, and maybe that has made her life more interesting. We will continue her fascinating life story in the next episode of Czech Life, when we will hear about her arrival in Czechoslovakia, her life behind the Iron Curtain and her only regret.