Only a handful of the hundreds of British women who moved to this part of the world with their Czechoslovak husbands after World War II remain in the Czech Republic. Many have died, while some returned home to the U.K. decades ago. One of the few British war brides still living here is Lillian Schořová, whose home is in North Bohemia. Radio Prague’s Sarah Borufka visited her there for this episode of Czech Life. 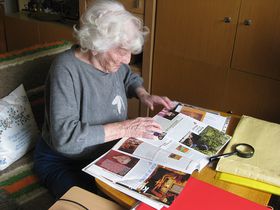 Lillian looks at articles written about her life Lillian Schořová has been living in the small suburb of Lom near the mining town of Most in Northern Bohemia for nearly 70 years. The 92-year-old Englishwoman, who was born in Stratford-upon-Avon, came to Czechoslovakia in 1945 with her husband Josef. The two had met in England, where he was fighting with the Allies. During World War II, some 12,000 Czechoslovak citizens were stationed in Great Britain, and the Czechoslovak government-in-exile installed itself in London in 1940. Josef and Lillian met in her hometown, at a dance. But Lillian first danced with Josef’s friend Jan.

“We went to the dance hall, and I danced with two or three boys I knew, because I went to school in Stratford-upon-Avon. And then this Czech came across the room and said: ‘Please, will you dance with me?’ So after we had danced, he took me back to my chair and said: ‘My friend would really like to dance with you.’ And I said I would. And that was my husband-to-be Josef. So he came across to ask me to dance with him. He didn’t know a word except ‘please’ and we danced together.

After Lillian had danced with Josef, his friend Jan, going by the name of John. asked on Josef’s behalf whether she would like to go on a date with him. This is how Lillian remembers the story. 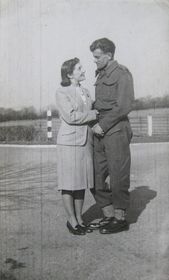 Lillian and Josef on the day they got engaged “So when we went outside, John and this Joseph stood there. And John asked if I would go with his friend to the cinema or the theater. And I said: ‘Does he speak English like you?’ and he said: ‘No, he only knows how to say please” and I said I had noticed that. And John asked if I’d go with him if he learned English within the next six months, because I had said that I didn’t know what we would do, and I don’t know how to speak Czechoslovak. And he said: ‘He will learn it in six months, will you promise that you will go to the cinema or the theatre with him?’ And I said: ‘If he learns English, I will go to the end of the world with him’. And of course, that happened, didn’t it? I didn’t go to the end of the world, but I did come here.”

Josef did actually learn English, but even before he spoke the language, he would often wait for Lillian outside her place of work.

“He found out where I worked and when Josef had free time, because he was not stationed in Stratford, he was stationed at Morton Paddocks, he came and he didn’t speak to me. He stood at the other side of the road. John had told him when I finished work, at half past three in the afternoon. So he stood there and just went with me to the railway station, because we had moved out to a village, so I had to take the train.”

In the end, Josef won Lillian over. He learned English and was finally able to take her out on a proper date. When Christmas 1940 came around, she arranged it so that Josef and she could spend the holiday together. 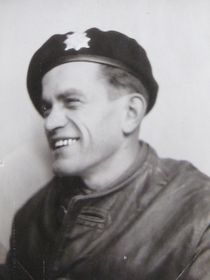 Josef as a soldier “At Christmas time, they asked all British people if they would entertain a foreign soldier for Christmas or for the New Year. So my mother said to me: ‘We will take two Americans’. And I said: ‘But mum, some Americans are very rich and we are not rich. We are just ordinary people. You know, I know two very, very nice Czechs.”

Lillian’s tiny apartment is decorated with hand-painted pictures, countless photographs and keepsakes ‒ including an album of pictures from the period when she met her husband. Among them is a photo taken on the day that she and Josef got engaged. 72 years later, her face still lights up when she sees it.

“And that was the day Josef asked me to be his wife.”

You look so happy in this picture.

“Yes, my brother took the photo. Of course, these are Czech officers, and that is Josef.”

He was rather handsome…

Josef and Lillian’s wedding ceremony was a modest wartime affair. Lillian has held on to the corsage she wore on that day. In fact, it is displayed in her living room.

“That is my wedding photo.” 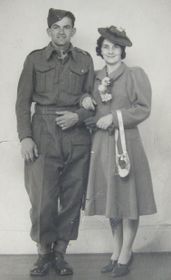 Lillian and her husband Josef on their wedding day You look lovely, what a nice picture.

The flowers? You kept it?

“Still got it. Some of the leaves have dropped off, but otherwise, that’s there.”

So where did you get married, and when?

Lillian has lived a very adventurous and interesting life – most of it spent in Czechoslovakia and later the Czech Republic. Originally, however, she had not planned to stay here this long.

“And then we came here, of course, on 17 September, 1945. For three months. Yes, I only came for three months. It’s a good three months. A long three months. Then, in January, towards the end of the month, Josef collapsed in the kitchen. I took him into hospital and they took two thirds of his stomach away. A man who had always been so active and strong. So that happened, he was in hospital for 11 weeks, after the operation, and of course, I had to get permission to stay longer.”

Those first years in her husband’s native country were very difficult for Lillian, not just due to her husband’s worsening state of health. Now, it was her turn to learn a new language. At first, she did not have many friends or people she could talk to. And as everywhere in Europe, the ravaging effects of the Second World War were still palpable here in Czechoslovakia. What was life like in those first years after the war? 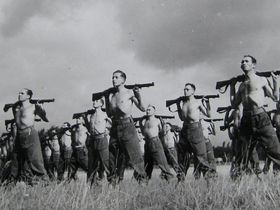 Josef at an army drill “Well, what was it like… No cars, no dogs, no cats, I didn’t know anybody except my mother-in-law, but she wasn’t very pleased her son had married an Englishwoman. So the first two years were very, very bad for me, very bad.”

Since then, Lillian has mastered the language quite well, and she even peppers her English sentences with the Czech word “no”, which amounts to something like “well”. But her accent is still noticeable, and she says many people point it out to her.

The story of how exactly Lillian learned Czech is fascinating, as are the years she spent living behind the Iron Curtain. In next month’s episode, we will hear more from Lillian about her early years in Czechoslovakia, her position on communism, and how she has managed to stay so remarkably fit even at 92.