Compared to other Arab and Oriental scholars like TE Lawrence, the Czech Arabist Alois Musil is not so well known in the English-speaking world, mainly because most of his seminal works were initially published in German. Nevertheless, he is regarded by many as a crucial figure who contributed enormously to the West's understanding of Islam at a time when the study of the Arab world was in its infancy.

Born into the family of a poor farmer near the Moravian town of Vyskov in 1868, Musil initially studied to be a Catholic priest and was ordained in 1895. After graduating from his seminary, he made his first trip to the Middle East to take up bible studies at a religious institute in Jerusalem.

Once he was in that part of the world, Musil's interest in monotheism prompted him make a number of trips to the areas of the Middle East where the Jewish, Christian and Islamic faiths had originated.

Over the next few decades he visited many parts of the Arabian Peninsula, where he befriended the Bedouin Arabs and compiled much valuable information on their traditions and way of life. He also quickly learned several of the region's languages, which helped him publish many seminal works on Islamic culture.

Professor Lubos Kropacek from the Institute of Middle Eastern and African Studies at Charles University is one of the Czech Republic's leading Arabists today. He says Alois Musil's work had a profound impact on the development of Arab studies in this part of the world.

"Arab studies at Charles University started during the second half of the nineteenth century, but Alois Musil was the first world-renowned figure in this field and we really still look at him with great respect."

One of Musil's most important achievements was his discovery of the 8th-century Qusayr Amra hunting lodge in Jordan, whose figural paintings corrected one of the biggest misconceptions Western Arab scholars had held about the nature of Islam. Professor Kropacek again:

Qusayr Amra "He discovered a number of frescoes there representing human figures. It was still believed back then that Islam was absolutely opposed to pictures of human or even animal figures, and that only geometric or vegetal motifs were permitted. When Musil came back to Vienna and wrote and spoke about what he had discovered, the leading Orientalists of that time said it was not possible."

In fact, Musil went back to Qusayr Amra a second time with witnesses and proved his claims. It was a development that changed the Western world's understanding of Islam. We now know that the religion only forbids human portraits in sacred locations like mosques, but that they are permitted in secular places like the Jordanian hunting lodge, which incidentally is now on the UNESCO world heritage list.

The frescoes in Qusayr Amra Over the years, Alois Musil immersed himself in Arab culture and even began wearing traditional Islamic dress. Nevertheless, despite his love for Arabic society, he remained a devout Catholic all his life and sought to foster understanding between Christianity and Islam. Professor Kropacek says that this attitude made Musil something of a visionary who was ahead of his time:

"Now, in the light of our modern experiences and our modern endeavours, we really have to feel some sympathy for Musil's attempt to widen the scope of our understanding of Islam and to point to common features [between religions] and to also work for better Christian-Muslim relations. He was a Catholic priest who read mass every morning up to his death. He was a very sincere Christian, who at the same time worked for an appreciation of the good, positive qualities of the Arabs, whom he came to know during his travels."

During the First World War, Musil was sent to the Middle East to counteract the efforts of the great English Arabist TE Lawrence - or Lawrence of Arabia as he is known to many - to instigate an Arab rising against the Ottoman Turks, who were the Habsburgs' allies during the conflict.

Although much has been made of this rivalry, Professor Lubos Kropacek says that both Arabists were ultimately unhappy with the settlement that was made by Britain in the Middle East after the War, whose repercussions are still being felt to this day. He says that the two men actually had quite a lot in common:

"Although they were adversaries during the First World War, they shared the same feelings vis-à-vis the Arabs and on the necessity of building good relations with them in human terms without any superstition or false prejudices, which sometimes still exist today unfortunately. They tried to do away with such prejudices. I don't think the two of them ever met face to face, but I am sure they would have understood each other quite well if they had"

Although Alois Musil always remained loyal to the Habsburgs and was even the personal confessor of the Empress Zita, he opted to become a Czechoslovak citizen when the Austro-Hungarian Empire collapsed after the First World War.

In 1929, he was one of the founders of the Oriental Institute at the Academy of Science in Prague, which was set up to foster commercial and cultural links between Czechoslovakia and the Middle East and whose Czech equivalent still exists to this day.

He also lectured in Oriental Studies at Charles University from 1920 until the German occupation of Czechoslovakia in 1938. He died in 1944.

Given the fact that Alois Musil did not begin publishing his work in English until the 1920s, it is not surprising that his huge body of work is not as well known in the English-speaking world as that of his great rival TE Lawrence. Nevertheless, according to Professor Lubos Kropacek, he still left behind much that every Arab scholar can be grateful for:

"In the Encyclopaedia of Islam, which is the main tool for all those who try to study the issues and problems of the world of Islam, there are several mentions of the discoveries made by Alois Musil. In the political sphere, the border between Palestine and Sinai in Egypt was also marked out after the First World War in accordance with Musil's texts, because he had travelled extensively in the Sinai area."

Besides improving our knowledge of the Arab world and of Islam, Professor Kropacek says that the example Alois Musil set in devoting his life to building bridges of understanding between the Occident and the Orient is perhaps his greatest legacy, especially in the context of today's fraught relationship between the two traditions:

"His sincere, multifaceted efforts to build good relations among Europeans on the one hand and Arabs and Muslim countries on the other also deserve to be mentioned, because they were pioneering steps in the direction of something that is perhaps even more important nowadays than it was back then, namely to work for good relations between these two sides based on better human understanding."

There is a permanent exhibition dedicated to Alois Musil near his birthplace at the museum in Vyskov: http://muzeum.vyskov.cz 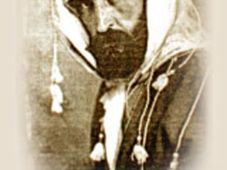 This week we reveal the name of our May mystery Czech and announce the names of the four lucky winners as well as a brand new competition question.…