Over the last 50 years Czech-born US scholar and genealogist Miloslav Rechcigl has researched Czech and Slovak cultural heritage in America, mapping the arrival of Czechs and Slovaks in America from the time of the first settlers to today. In this Czechs in History we meet with Dr Rechcigl to discuss some famous Czechs in the New World, including the first Czech to set foot in the American colonies and the first to stay. Miloslav Rechcigl: Czechs in History... in America.

"It's an extremely rich legacy actually which many don't know: the first Czech to set foot on American soil was a fellow by the name of Joachim Ganz who came to North Carolina in 1585, 35 years or so before the Pilgrims on the Mayflower. He was related to the Prague astronomer David Ganz: the first scientist, actually, to come to America. By the way, the Czechs were among the first people in Europe who knew about the discovery of the New World. There still exists a publication, I believe in Pilsen, from 1500 describing the discovery of the New World."

One of the individuals that you've been specifically interested in was Augustine Herman: what do we know about him and why was he important?

"He was a very interesting character: he came to America about 1640 to New Amsterdam - now New York. Being a merchant he became quite wealthy; he knew six languages including Latin, so that the governor of the province used him as a diplomat. But, then he got into some difficulties and left for Maryland. There was a lord who offered him a domicile where he could stay. 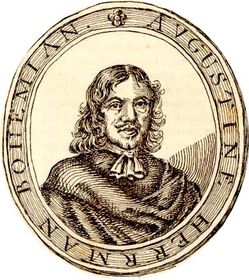 Augustine Herman When he learned Herman was also a cartographer they made a deal: he asked him to draft the first map of Maryland and Virginia, for which he received around 20,000 acres of land which he called 'Bohemia Manor'. He also made Herman a lord. Augustine Herman Bohemiensis. He was very prominent in many ways and one of the wealthiest people in Maryland. A number of senators and congressmen and Supreme Court justices were among his descendents."

You have described him as one of the first 'true Americans' - in what sense?

"It has to do with the type of life he led: among the Dutch, among the British, European influences as well as American ones, he was an all-around person, energetic and sort of expressed characteristics of true Americans."

You yourself settled in Maryland, have you been able to visit some of the places where Herman worked and lived?

"Yes I did visit the original place where Bohemia Manor used to exist, which is not too far from Baltimore. And there is a highway from Baltimore that still carries Herman's name. There is still a river in Maryland called 'The Bohemia' and another called 'The Little Bohemia'! So, there are lots of geographical terms that go back to Herman's times. It's fascinating. I even met a number of Herman's descendents and I have to say that they are proud of their lineage. He was truly an extraordinary man."

If indeed he was one of the first new Americans, in which ways did he express a longing for the Old Country?

"Well, I would say the most obvious one was when he signed his name: interestingly, in his Last Will he wrote I, Augustine Herman, born in Prague, the capital of Bohemia... so he did try to convey the notion of old heritage and his homeland. Interestingly enough, we don't know anything about his parents - we don't know who they were - we only know that he was born in Prague. That's all we know."

The flipside of your work is Slovakia - I wonder is there any kind of categorical difference in immigration & identity between the Slovaks and the Czechs?

"I would say this: the Czechs began to emigrate earlier. A more notable number of Czech émigrés began coming to America following 1848, the period of revolution when the economic situation was not the best and also for political reasons. Primarily political reasons. The Slovaks began coming around 25 years later, about 1875. That's the first difference.

The other difference is that when Czechs came to America they usually settled in rural areas, places like Texas, Nebraska, Oklahoma, Wisconsin, Minnesota, and they became, essentially, farmers. Whereas, the Slovaks - and this is a curious phenomenon since they themselves came from rural areas - they didn't go to farms, they ended up in mines, the steel industry, where life was extremely difficult. Of course there were exceptions. Some Czechs with trades - blacksmiths, carpenters, locksmiths - they ended up in the cities."

Emigrants crossing river, ca. 1860, photo: cehs.unl.edu Through your research you've come across thousands of names - sometimes learning no more than that - the sound of the name. What do you think about, coming across these names?

"What do I think about them? Well, I was struck by the fact that most of these people were relatively poor. Yet, through their personal initiatives some of them were able to accomplish quite a bit. And some of them reached the highest horizons, truly a phenomenon. In Bohemia there were two Nobel Prize winners: Hejrovsky and Seiffert. But, when I started 'digging' I found there are close to 15 people who eventually became US citizens or were born there but had Czech roots. So, some 15 people [with Czech ties] became Nobel Prize winners. Truly phenomenal. So Czechs have shown a capability of making it no matter where they were."

Nebraska, 1897, photo: cehs.unl.edu Do you think that the perception of Czech & Slovak heritage in the US is better today than 20 or 30 years ago?

"Oh, it's definitely better than it used to be 20, and certainly 50 years ago. When the first immigrants came to America from whatever country they were even ashamed of their origins. So the Czechs used to say they were 'Austro-Hungarians'. But now there is a perception that everybody is 'proud' of their origin, getting interested in genealogy and they want to know where they came from. Some Texan families have been speaking Czech for seven generations. There is almost I would say a 'Czech Renaissance' now. It's amazing."