Hugo Haas was one of the stars of Czechoslovak cinema's golden age of the 1930s. This versatile actor and director was hugely popular in the First Republic and he appeared in a number of classic films from that era. Despite his success, however, Haas's life and career - like that of so many other Czechs who lived during this period - was blighted by the tide of history that swept through Czechoslovakia in the 20th century.

Hugo Haas was born in 1901 in Brno to a Jewish merchant family. Although he hadn't much of an academic career, he did attend the Conservatory in Brno, where the composer Leos Janacek was supposedly instrumental in getting him to study drama.

Haas was subsequently hired by the National Theatre in both Brno and Prague, where he quickly rose to prominence as a gifted comic actor. Movie roles soon followed and Hugo Haas rapidly established himself as one of the leading filmstars of his generation. Czech film historian Pavel Taussig says Hugo Haas stood out among his peers because of his understated, realistic style of acting, which was quite unique in cinema at a time when most film actors were simply theatre thespians performing in front of a camera:

"Hugo Haas was one of the most prominent Czech actors during the period when he worked in this country, both in the theatre and especially in film. At the same time it's very important to remember that he was also one of the most modern actors around. Haas was one of the very first actors in the world to erase the distinction between an acting performance and normal human behaviour. You can see this when he is playing a normal "civilian" for the camera. His performance is such that you get the feeling you're actually watching a documentary. They say that good actors understand that you don't act in front of a camera; you should simply exist. Haas managed to do this to perfection." 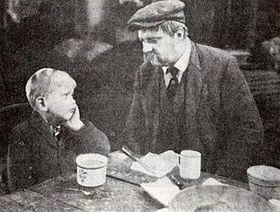 A Street in Paradise Although the 1930s represented a high-water mark for Czechoslovakia's burgeoning film industry, which threw up a host of stars such as Vlasta Burian and Oldrich Novy, Hugo Haas was probably the leading man who most appealed to Czech audiences at the time, playing likeable bumbling characters in hugely popular films such a Tri muzi v snehu (Three Men in the Snow) and Ulicka v Raji (A Street in Paradise). Pavel Taussig says that, despite his stardom, Hugo Haas still managed to retain a certain everyman quality, which charmed Czechoslovak audiences.

"Most actors, even comics, are very conceited. Haas wasn't like that. Although he himself was very good-looking with lots of sex appeal and was much admired by women, Haas could create a mask. He didn't mind making himself appear ridiculous and unattractive. At the same time he could be very ironic and even self-deprecating. Above all, he didn't take himself too seriously, and this is where he was very different to other actors from this country, such as Vlasta Burian."

Although Haas initially specialised in comic roles, he could also play parts which had a serious edge, such as the embattled Dr. Galen in the film version of Karel Capek's play Bila Nemoc or The White Plague, which is considered to be one of Haas's finest works.

This film was also adapted for the screen and directed by Haas himself,and this cemented his reputation as the "renaissance man" of Czech cinema.

Bila nemoc is known for its satirical portrayal of a bloodthirsty dictator, who is strongly reminiscent of Hitler, a figure whose shadow loomed large over Europe when the movie was made. Unfortunately, Bila Nemoc turned out to be a sadly prescient film: Just one year after it was completed, Hitler annexed Czechoslovakia and Haas was forced to flee his homeland for fear that he would be persecuted as a Jew and anti-Nazi sympathiser. His brother, the composer Pavel Haas, was not so lucky and ended up perishing in Auschwitz, something which haunted Haas for the rest of his life.

After fleeing Czechoslovakia, Haas eventually settled in America, where he continued to pursue a career in film. As he didn't speak much English initially, he had to adjust to not being a leading man anymore. He gradually managed to establish himself as a supporting character actor, usually playing an oily foreigner or villain, most notably as the Dutchman Van Brun in the Oscar-winning King Solomon's Mines.

When he had managed to scrape enough money together from acting, he set about making his own films such as Pickup and Thy Neighbours Wife. These were usually cheaply-made B-movies, which were a far cry from the work Haas did in the 1930s. Nevertheless, Pavel Taussig says that Haas's achievement in actually getting into a position to make films again should not be underestimated:

"Naturally these [later] films are very low-budget, as he had very little resources at his disposal to shoot them. He made them as cheap, small-scale projects for as little money as possible. But if we take account of the fact that so many famous directors from the Old World ended up in America after the war, and so many of them didn't make it, then we have to look at what Hugo Haas managed to achieve as a success."

Pavel Taussig maintains that Haas's acting talent never left him and that he even had an influence on a number of younger American actors:

"It's no coincidence that he also became a much sought-after acting teacher when he started acting as well as directing and producing his own films, For example, he deserves credit for helping to launch the career of Gregory Peck, who later became very famous."

Despite the fact that Haas retained the respect of his fellow actors in America, his films from this period were not well received by critics. Besides their cheap production values, movies like Thy Neighbours Wife were attacked for their lurid and tacky plotlines, which usually centred around a middle-aged man - played by Haas himself - being enticed and ruined by a younger seductress.

Some reviewers found these movies so shoddy and second-rate that they described Haas as a "foreign Ed Wood," and it's a label that still persists to this day. Pavel Taussig admits that Haas's later films come nowhere near his masterpieces from the 1930s, but claims that they should be viewed within the context of Haas's life as an exile in America.

"The tragic fate of his family and of Jews in general really left its mark on him. This also manifested itself in his work. He tended to seek refuge in melancholy. Sometimes it was even a little bit kitsch. Most of the characters he played later on were old men who were all alone and who nobody was interested in. These characters usually fell for a younger woman, but their love would invariably turn out to be nothing but a false illusion and they quickly ended up having to face the harsh reality of their situation. These scenarios pretty much tied in with Haas's own personal feelings about living abroad and the melancholy of his exile."

Haas eventually returned to Europe in the late 1950s and settled in Vienna in 1961, where he occasionally appeared on television. Despite the fact that comic acting was perhaps his greatest gift, he never made another comedy after leaving Czechoslovakia. He is said to have been planning to return to permanently to his homeland during the Prague Spring, but this never happened due to the Soviet occupation of Czechoslovakia in 1968. Haas was deeply affected by the invasion and died a few months afterwards.

In many ways, his career was indicative of the history of twentieth-century Czechoslovakia in that it flourished in the 1920s and 30s before being severely disrupted as a result of Nazi and lSoviet tyranny. Although Haas did manage to make over thirty films in exile, he is best remembered today for the work he did in Czechoslovakia, which Pavel Taussig says is still highly appreciated:

"I think his importance and popularity is confirmed several times a year when Czech Television shows a film starring Hugo Haas. These screenings always gets huge ratings, unlike many contemporary films shown in cinemas today, which a few hundred or couple of thousand people go to see. When a Hugo Haas film is shown, hundreds of thousands of people still tune in to watch, even after so many years." Hugo Haas was one of the stars of Czechoslovak cinema's golden age of the 1930s. This versatile actor and director was hugely popular…

When Karel Capek's play Bila Nemoc or The White Plague first came out in 1937, it was seen as a warning against the dangers of fascism,…