"All our steps must be led by a love for our nation, and taken to ensure its happiness." That was the life-long motto of Josef Kajetan Tyl, playwright, actor and writer, who was one of the most outstanding figures of the Czech National Revival Movement in the first half of the 19th century.

Tyl's mother was a daughter of an established entrepreneur from Kutna Hora east of Prague, who didn't want to hear a single word about her daughter Barbora's love for a young oboe player from a military band. After her secret marriage to him, Barbora gave birth to Josef in 1808. However, Tyl's grandmother did not communicate with her grandson until he started attending secondary school and his teacher told her that Josef Kajetan was an exceptionally gifted boy. But as we hear from professor Josef Herman from the Faculty of Arts at Charles University, theatre was much more attractive for young Tyl than studies of philosophy:

"Tyl started to be active in theatre as a student, in fact he soon escaped from school in Hradec Kralove and became a member of a travelling theatre troupe. What is most important, though, is the fact that since the very beginning young Tyl strove to create a theatre with a national character, which would underline the necessity of a free Czech nation. The Czech lands in the 1830s were part of the Austrian empire, and German was the official language in the whole monarchy. However, it soon became clear that such a programme could only be materialized in the Czech capital Prague."

Tyl arrived in Prague in the 1830s and started working at the Estates Theatre - first as just an actor, but he soon became a leading figure there - as an actor, director and organizer of the Czech theatre ensemble in the otherwise German theatre. It was during this period when he wrote his most famous play, Fidlovacka. It was in this play that people could first hear the song 'Where Is My Home' which later became the Czech national anthem - and still is. But we mustn't forget Tyl's role as a writer, he wrote short stories and he also was the founder of a magazine called Kwety èeské, which also still exists today under the name Kvety.

Tyl became politically active in the revolutionary year 1848, he even became an MP in the Austrian parliament in Vienna. However, due to his - for the Austrian authorities rebellious - ideals about independence for the Czech nation, he was marked as 'politically unreliable" by them and was forced to leave the Estates theatre.

"Tyl also had to leave because the subsidies that the Czech ensemble in the Estates theatre had been receiving were taken away from them. For political reasons Tyl was prevented from getting a license to run his own travelling theatre company, so he simply joined one of many as an actor. He cooperated with two major companies existing at that time - the Kulas and the Zelner theatre troupes - and he had a concrete idea in his mind about the role of such troupes in Czech society. They were meant to be messengers of all the news from Prague, and to inform people in the countryside about what was going on in the capital, as in Prague there were people who could start fighting for the Czech nation's freedom."

But his ideas were premature and in fact never in his life Tyl could materialize what he saw in his dreams. He died in poverty in Pilsen, at the age of 48, leaving behind nearly 20 plays. Dr. Herman says they can be divided into three groups:

"There are three basic groups of Tyl's plays, but the already mentioned Fidlovacka - or shoe-makers' fair - does not belong to either of them. It is based on the so-called 'local vaudeville' - which was something the audience loved. One of my colleagues goes as far as to say that Fidlovacka was the first Czech musical, and really, it has all its attributes. This play is known especially for the song Where Is My Home - the current Czech anthem. Fidlovacka is staged relatively often even now, but usually in a shortened version. What is regularly cut out is the scene when prostitutes come to the shoe-makers' fair, wanting to get some customers, and the gendarme chases them out using very rude words. I think not even nowadays would the audience be able to swallow the kind of speech Tyl uses in this scene of Fidlovacka."

The first group of plays is what Tyl himself called 'pictures from life' and these plays show the life of Czech society, especially of 'petit bourgeoisie' . One such example is a play called 'Arsonist's Daughter'. They have one common denominator - they feature Czech people who thanks to their wits and abilities win over their German-speaking neighbours, be they born Germans or Czechs who gave up the Czech language and started speaking German in order to be better off as members of the German society.

"Then come 'dramatic fairy tales', such as "The Strakonice Bagpiper", a genre which came to the Czech Lands from Vienna. They show virtues of ordinary Czech people but added are fairy-tale figures: witches, fairies etc., as well as spell-bound musical instruments - a popular theme widely used since the times of Mozart and his Magic Flute."

Tyl's historic plays - which form the third group - were written with a clear purpose: Tyl worked with famous persons or famous periods of Czech history, which became a kind of models depicting the bravery of the Czech nation. His most famous historic play, Jan Hus shows the courage of the 15th century Czech reformer, who triggered one of the most famous chapters in Czech history- the Hussite movement. There were many things that could not been said openly because of the strict censorship from the part of the Austrian authorities, that's why Tyl had to borrow parallels from the past.

When I looked for facts from Tyl's private life, I was surprised to find out that although he was married to actress Magdalena Forchheimova, he had children with her younger sister Anna.

"He married Magdalena and had children with Anna, but according to what we know now, this strange household seems to have functioned very well. Magdalena Forchheimova was Josef's colleague from a travelling theatre troupes. On one of their journeys Tyl fell ill, Magdalena cared for him and he decided to marry her. She was an experienced actress, who had been acting since the age of 16. But despite their common interest, the two were much too different: while Tyl was filled with ideas on how to organise social life and free the Czech nation from the Austrian yoke, Magdalena was a pragmatic woman, mostly interested in money. And there was yet another problem: she could not have children."

Then Anna appeared. She was 14 years younger than Tyl, and she did not resemble her sister at all: she showed immense interest in Tyl's activities, was filled with energy. She, too, was an actress, outstanding especially in the roles of 'naive young girls'. It soon became clear that for Tyl she meant more than simply being his sister-in-law. A peculiar kind of household came into existence: Tyl's wife refused to go, although her sister started giving birth to his children. And so she started to care for them. We don't know now how the two sisters behaved to each other, what kind of feelings they had. When Tyl died in 1856 in Pilsen, Anna was expecting his seventh child. 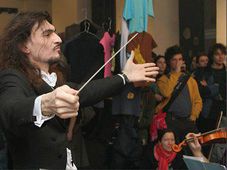 ‘Kde domov můj’ or ‘Where is my home’ is a song familiar to every Czech, whether he lives at home or abroad. It is the Czech national anthem. However,… 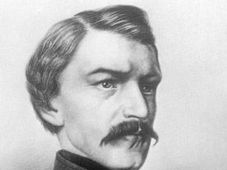 This Saturday, July 29, is the 150th anniversary of the death of Karel Havlicek Borovksy, regarded by many as the first Czech journalist.… 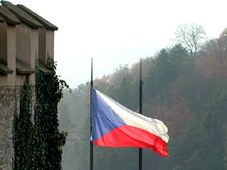 What you're hearing is the Czech national anthem "Kde domov muj" -"Where is my homeland". This Tuesday marks the 170th anniversary…