The rise and fall of the King of Comedians, Vlasta Burian

For all the funny people who have contributed to a century of Czech filmmaking, the title “King of Comics” belongs to only one. Vlasta Burian would be 119 years old next month, and he would be very proud of his reputation indeed, still a star of the Czech television screen today. But his career as a comedian went hand in hand with the tragedies of the 20th century, and in his lifetime he was a pauper, a prince, and a pauper again.

From early on, Vlasta Burian was interested in two things above all else: sports, for one - he played league football for Žižkov and had a showcase full of trophies to show for his skill in cycling and tennis. And he also had a special appreciation for the theatre. Vladimír Just, who has written four books on Vlasta Burian, told me about how both of these interests worked with a knack for comedic storytelling to make him such a special comedian:

“He was someone who worked his way up from cabaret stages with acts that bordered on circus clownery. He had a tremendous gift for imitation and for movement, he could have made a living as an acrobat or a juggler if he’d wanted to. He did work in a top circus actually, and he was even a goalkeeper for Sparta Prague, the most popular football team in the country at the time. So he was a person of enormous talent in many things, and he worked his way up from the cabaret to one of the most important stages in Prague.”

Vlasta Burian was one of those rare people who could get a laugh by sitting still and saying nothing. He had a face to play any kind of character at all, and that lent wonderfully to parody, but his humour was generally simple and gentle, and based almost entirely on improvisation.

In short, he was a natural born entertainer, but as his great-granddaughter Monika Kristlová told me, talent was by no means the only key to his success:

“He was a self-made man. It was not only his talent, but part of his personality as a hard-working person; he probably worked like top managers do nowadays, from really early in the morning until late in the evening, with not much sleep. And of course, as my grandmother used to say, he loved applause. He really enjoyed it, and I think that his love and passion for his work and acting is the reason that he is still popular. You can feel it in his acting, that he really loved it.”

By 1925, when he was 35 years old, the poor boy from Liberec had opened a theatre of his own on Wenceslas Square, in part because he was unable to keep up with his obligations for other theatres. It made him rich, very rich, in fact, and a golden age began in which he was getting ten times the commission of his colleagues. They might have been equally famous, but he was becoming a living legend. Chocolates and new varieties of roses were named after him, he purchased a castle, and the fastest cars, and even considered running for president, some say; all thanks to the hitherto unseen popular support he enjoyed as a comedian.

“His life was like something out of a book. From great poverty he had become one of the wealthiest people in Czechoslovakia. He had an industry of films and gramophone records behind him and he starred in advertisements... And what’s more he was proud of his wealth and he flaunted it; if Sparta won a match then all 11 players were invited to his castle for a lavish celebration and he made sure all of Prague knew about it. He was like Charlie Chaplin in this, who also went from rags to riches. But Chaplin lived in a society used to great wealth, whereas in Bohemia such people have always been envied. So this came back to haunt him in the years after the war, his flaunting of wealth.”

Burian continued to do what he did best through most of WWII, selling out theatres. But with the paranoia that followed the war came his downfall. And it happened very fast.

“He was accused of collaboration, and there were two main points. First that he was visited by Nazis in his villa and was friends with Nazis, which we knew as a family was not true. The second was that he had taken part in a radio programme called “Hvězdy nad Baltimore”.

“Hvězdy nad Baltimore”, or The Stars over Baltimore, was a Nazi radio sketch with Burian that ridiculed the exiled Czechoslovak government in London. But just as he had made tacit fun of Germans throughout the war, sometimes risking his career or even his life for a particularly snide joke concealed in Czech, Burian testified that he had in fact sabotaged the Stars over Baltimore.

“He was born in Liberec so he was fluent in German. But in The Stars over Baltimore his German was very, very bad. So it was a kind of comic protest whereby he wanted people to know that he was not on the Germans’ side, and he made a joke of them.”

The “joke” could not be examined by the court, because the recording had mysteriously disappeared. When the war ended, he was thrown in prison among common thieves. Eventually he was released, but the press had convicted him already, politicians were eager to make a point of him, and despite scanty evidence he was sentenced to several more months of imprisonment and a fine of half a million crowns.

“It was the scourge of success. His success was so great that his fall was all the worse. He never understood how there could be such a wave of hatred against him, especially in the press, in a nation that had once absolutely adored him. Not a single voice came to his defence. So after he wrote a letter of contrition he was pardoned in 1950. But it would never be the way it was before. He was to stick to the scripts, there was to be no improvisation, and he didn’t know how to act without improvising. And when he finally came back to the stage and screen, he was a ruin, a shadow of the former King of Comedians.”

Mr Just found in the archives that State Security had fixed the court. In the early 1990’s the actress Lída Baarová admitted that she had been forced to testify against him; he was exonerated, 32 years after his death, and his body was moved to the pantheon of Czech citizens. That though in no way affects the fall from grace that Vlasta Burian had to live through for 17 years until he died in 1962. He suffered his whole private life from melancholy, some believe from a manic depressive disorder, and with the mania stripped from him, he is said to have died in depression. A poignant story from that time recalls his being asked to sign a photograph, on which was written “Král komiků”, “The King of Comics”. But he was just a “králík”, he said, a little king, or literally in Czech, a rabbit.

For his family, and his great-granddaughter Monika Kristlová, Burian’s exoneration in 1994 meant more than just a personal vindication.

“It’s not really about him but more about society and principles which are very fragile and connected to all of us, so it was very important to everyone in our country. I think it’s very scary in a way, it makes me scared of reality to consider how powerful and rich he was, and still it was possible to accuse him of having done the opposite of what he did in his life. It’s very scary.”

In the long run, everybody’s story ends with how they are remembered, and Vlasta Burian is as alive as ever on Czech TV screens, still the King of Comedians as much as ever, and he will have the last laugh in his story for a long time to come. 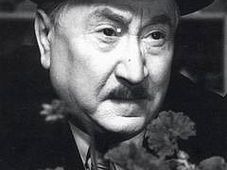 Czech movie star Zita Kabátová, who graced the screen in the 1930s and ‘40s with fellow leads like Oldřich Nový, Vladimír Slavínský…