When visiting the Czech Republic it's hard if not impossible, to not reflect on Bohemia's rich and extensive history. By touring the country's many castles in the summertime visitors will also know that there are a great number of professionals dedicated to bringing the medieval ages back to life. Professionals trained in the way of the sword, the crossbow, the staff, and the pike. At places like Hradec Kralove, Liberec and especially Cesky Krumlov. Been to Cesky Krumlov you say? Well it may just be you've seen a certain dark knight conquered during the famous Festival of the Five-Petalled Rose. His name is Tankred de Besancon - one of the wiliest rogues you would hope... well, hope to avoid... as he takes his blade to the mongrels! Who are you, after all, to stand-up to a knight?

In real-life, though, things are a little bit different: evil as Tankred de Besancon may be, it is just a character and a stage-name for 39-year-old Jan Trunecek, medieval history buff who works at Skoda Auto, probably one of the nicest people you could hope to meet. Last month I had the chance to visit Jan at his home near Mlada Boleslav. On a beautiful winter's day, shortly after snowfall, we drove out to his farm in his transit truck, along with his dog, Karel von Autobahn, barking in the back. On his property Jan Trunecek keeps a stable of horses: eight thoroughbreds with names like K.G., Frajer Jack (Cool Jack), and Nashville, who stood curiously watching in the noonday sun as we passed on to the house. Horses, Jan told me, he should never have been able to ride, after an accident when he was sixteen: he had fallen two stories at a construction site.

"I broke my back. I spent two months recovering in hospital before I was sent home. After recovery my doctor told me I could do anything at all except for one thing: to ride on horseback. Still, I couldn't give up the idea - I loved horses. Much later, I decided I had to try it: I was 30 when I first got on a horse. The first ride, though, was really terrible. I was thrown from side to side, I felt the horse was going far to fast, and I was terrified I would fall."

Since then Jan Trunecek learned to ride and learned to ride well, leaving his doctor's warning behind: he's never looked back. While riding might be enough for the rest of us, Jan took it to another level, trading his favourite Australian cowboy hat for a knight's helmet and medieval armour, lance in hand. Jan had done sword-fighting before. But he had never combined his skills with riding on horseback, performances few groups offer in the Czech Republic even today. Getting together with members of his medieval group in 1999 Jan decided they should master the art of the joust.

"All of us were familiar with the sword and some of us knew how to ride, so we decided we would form a new group combining medieval displays with tournament horseback riding. We did all kinds of historic research, and slowly we began to practice. All kinds of equipment was ordered and constructed according to specifications. Members also began sewing historic costumes to prepare a proper and historically accurate show."

Soon performances took off, and today Jan Trunecek says his group is only one of two in the Czech Republic to offer performances that use so many horses, and perform so many shows: around 80 - 90 in the summer months. In the end, he has to specially arrange his holiday to be able to perform. He told me that last year they spent two months in Cesky Krumlov, on a rotational basis.

"It is quite demanding. Since founding the group I haven't really had a single day off. Weekends too are spent either training or taking care of the horses, or looking for new venues. There is very little time to rest."

Still, Jan Trunecek, whose evil knight in the performance tries to steal away a princess, says he wouldn't have it any other way. Even at his most exhausted he has little problem getting into character, just the opposite. He says:

"Sometimes I get so used to being Tankred de Besancon I adopt the gruffer aspects of my alter ego - which must be more than a little unpleasant. You get used to it, that's all, when you perform day after day."

In other words, down you witless worm! It all makes perfect sense. The only thing Tankred de Besancon loves more than himself is power and intrigue. No matter that the children spit on him, or that he always loses in the end: it is all part of a grand medieval show. Not unlike the spectacle in one of Jan Trunecek's favourite films, the upbeat and anachronistic "A Knight's Tale", starring Australian heartthrob Heath Ledger. Says Jan Trunecek: that film caught the excitement of what jousts must really have been about, and it did so to the music of Queen. In his words: what more could you want?

And so, while, most people would cringe at the thought of 25 kilos of steel armour on their body, a helmet on their head, Jan trains on a regular basis, on horseback with his lance and sword, on his own, and together with other members of the group. He has a favourite move - the so-called "Gate", disarming his opponent leaving him defenceless. Practice and choreography always come first. There are practical reasons of course: risk must be kept to a minimum.

"We have to train a lot, we really do - this is a serious business. Everything is carefully choreographed according to our skills, so that my sparring partner always knows exactly what I'll do and how to properly react. To keep the risk at a minimum you always have to have the situation under control."

In the end, I asked Jan Trunecek about the horses once more. After all, they are half the performance - without them it would be hardly be the same. Did he think they aware of their importance in the show?

Jan Trunecek alias Tankred de Besancon: if you ever see him perform, well, remember this: under the armour of an evil knight, who screams defiant in defeat, is really a pretty nice guy. Peer through the drilled holes in his steel helmet you'll see him breaking into a grin, a man unafraid of pursuing his dreams, getting a kick out of playing the rogue. 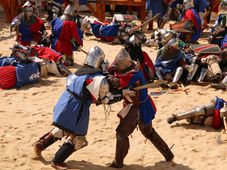 Modern day Czech knights train for Battle of the Nations

Many of those who live in the Czech Republic may tell you that they have met or at least seen someone who is involved in medieval reenactment.…

Was it Homer Simpson? The guy who spent the night locked up in a pub drinking as much beer as his body would take. Bats don't watch… 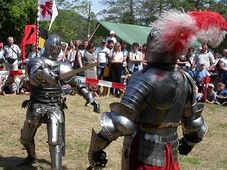 At first sight Lucie Schwarzova looks like a normal young woman. But as she admits herself, her hobby - historical fencing - makes…