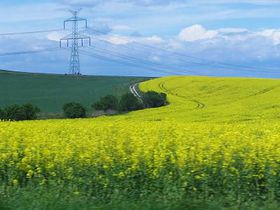 Czech agriculture suffered its worst year in 2009 since joining the European Union five years earlier according to figures from the national statistics office. The value of agricultural production fell by 18 percent compared with a year earlier with sharp drops across all sectors. The value of the cereals crop was almost 28 percent lower and milk production was worth 29.5 percent less than in 2008. The number of agricultural workers declined by around 5,000 or just over 3.0 percent. Part of the collapse was due to the dip in commodity prices after record levels earlier. Staying on the farm, the Czech Republic looks like being in the forefront of moves to cultivate a new genetic potato following European approval for the step this week. The Amflora potato has been modified so that it produces high amounts of pure starch which is used in the production of paper, textiles and glues. German chemical giant BASF waited 13 years for what is only the European Union’s second approval for a genetically modified crop. The company carried out field trials growing the potato under special supervision in the Czech Republic which as a result is expected to be one of a few sites where commercial cultivation will start this year.

The winner of the first of a handful of pilot projects for private companies to form special partnerships with the state to build infrastructure has been announced after a six year wait. Construction giant Metrostav has been selected to build new facilities at Prague’s military hospital at Strešovice under a so-called Private Public Partnership deal. It reportedly bid 2.6 billion crowns to carry out the construction work and then manage the facilities long term. But the Czech government still has to decide whether such arrangements are a good deal after blocking a previous PPP project for a highway.

Low cost Irish airline Ryanair has sparked controversy with a public offer to become the main carrier at Prague airport if state-controlled Czech Airlines collapses. Ryanair suggests such a collapse is on the cards because all of Czech Airlines aircraft have been offered as security against bank loans. Czech Airlines says the information is false. Ryanair nonetheless says it wants to boost its current four routes out of Prague to 33 but only if the airport cuts its charges. One of its managers said a similar offer was made to the airport in the past guaranteeing two million new passengers.

Gold may have lost much of its role as the final guarantee of security for global currencies but it is still not to be treated with distain. That at least is the view of the Czech Finance Ministry which has taken a negative stand on a request to loan a ton of gold from the national bank for a Czech exhibit at this year’s Expo 2010 in Shanghai. The gold is being sought for the so-called ‘Czeknowlogy’ part of the exhibit where sensors should allow the emotions of visitors to be displayed on a giant drop of pure gold. But the ministry’s own risk sensors have been activated by the proposal. Organisers say they are investigating other possibilities if the government gives a definitive ‘no’ to the loan.