Rosneft to deliver oil to Czech Republic in mega deal 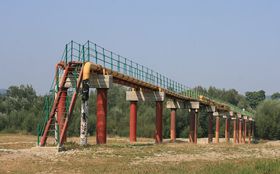 Druzhba pipeline, photo: Vodnik, Wikimedia CC BY-SA 3.0 Russia’s state-owned oil company Rosneft has signed a contract with Poland’s PKN Orlen group to deliver crude oil to the Czech Republic via the Druzhba pipeline. PKN Orlen controls the Czech petro-chemical holding Unipetrol, majority owner of Česká rafinérská, the country’s largest refiner and oil products company. Under the deal, which is worth over CZK 135 billion, Rosneft will deliver up to 8 million tonnes of oil in the next three years. Temelín power station, photo: Filip Jandourek, ČRo The fall of the Czech government has created instability that could result in state-controlled power company ČEZ delaying a decision on whether to expand its Temelín nuclear power station, a ČEZ spokesperson said this week. The company has been expected to announce in September the winner of a huge tender to build two new reactors at the plant. The bidders are the Japanese-owned Westinghouse and Russian state-owned Rosatom.

Only a quarter of Czech businesspeople want euro Photo: graur razvan ionut, FreeDigitalPhotos.net Only a quarter of Czech businesspeople are currently in favour of the country adopting the euro, suggests a new survey conducted by the Czech branch of PwC. PwC’s managing partner Jiří Moser said the Czech Republic had benefited during the economic crisis from having its own currency; however, he also pointed out that eurozone states such as Germany represented the country’s biggest trading partners, which could be an argument for adoption in the future. The governor of the Czech National Bank has previously said 2019 would be the earliest date for possible adoption. 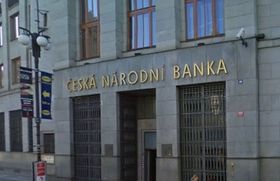 Photo: Google Street View Banks in the Czech Republic are “stable and resilient” and would stand up well to possible adverse developments, the Czech National Bank said this week after conducting stress tests. Officials said the country’s banks would not be endangered even if what was described as a markedly bad development were to occur. Photo: Czech Television The combined exports of the Czech Republic’s 50 largest exporters grew to just over CZK 1,000 billion last year, according to figures released by the CZECH TOP 100 association on Friday. That was 16 percent higher than the figure achieved by the most significant exporters in 2011. Carmaker Škoda Auto remained the biggest exporter, while energy company RWE moved from third to second in the rankings by leapfrogging IT and consumer products firm FOXCONN CZ.

Avia to shut up shop in Czech Republic 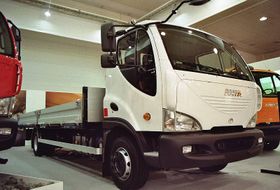 Avia, photo: Spielvogel, Wikimedia CC0 1.0 The truck-maker Avia is to cease production in the Czech Republic at the end of next month, it announced this week. The firm plans to make its lorries in India for export to Europe. The director of its Prague facility told the news website iDnes.cz that while over 1,000 trucks produced there were sold last year, it was still too few to make the plant financially viable. There had been speculation about the factory’s future as only four trucks have been made there this year.