The Regional Court in Usti nad Labem, North Bohemia, has ruled that the local authorities breached the law during proceedings concerning the construction of a new industrial zone near the town of Most, where the Mexican company Nemak has started building its plant. 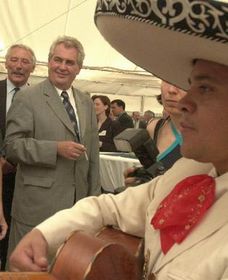 Politicians in Northern Bohemian town of Most, photo: CTK The court said the authorities ignored the right of the owner of adjacent land to have his say in the proceedings.

A total of nine lawsuits have been filed by environmental organisations and local citizens against the construction of the industrial zone.

Nemak, which produces aluminium parts for car engines, wants to invest 70 million euros in its new plant in Northern Bohemia. Within ten years, Nemak should create up to 1,300 jobs in a region with unemployment exceeding 20 percent.

Nemak had originally planned to build its plant in an industrial zone in the West Bohemian town of Pilsen but had to seek another location after heavy protests from local citizens, who feared the production could threaten the local environment.

Mexico-based Nemak wants to bring production nearer to its European customers. According to company representatives, several European car producers have already expressed interest in its products.