Czech officials threaten action against "only the young" job ads

Czech labour officials are threatening to fine a Japanese automotive company whose help-wanted advertisements stipulate that applicants must be under age 35.

Czech labour laws prohibit age discrimination, but the daily newspaper Mlada Fronta Dnes reported that this did not stop the Japanese auto-parts maker Shimizu from posting the ad in a local newspaper in the Northern region of Liberec.

Shimizu is one of several auto companies expanding into the Czech Republic who are receiving government incentives for building factories in a new industrial zone in Liberec.

An unnamed company official admitted that the advertisement discriminated against older people. As an excuse he said the wording had been requested by the company's Japanese representative.

A labour activist told the newspaper that discrimination on grounds of age, sex and race were common in the Czech Republic because regulators lacked the resources to prosecute violators. 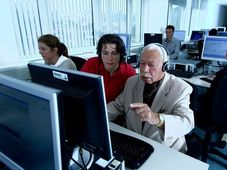 Around half a million Czechs are currently unemployed and with roughly 50 000 vacancies, it is clear that only one in ten applicants…

The Constitutional Court has ruled in favour of a man who has accused the Office of the Government of age discrimination. The man…

Age most frequent cause of discrimination