Just a few days ago, the Czech engineering company Skodaexport signed a contract to modernise the Ennore power station in Chennai, India. In the tender, Skodaexport beat several strong competitors, including the largest local player BHEL. Skodaexport will lead a consortium to renew three of the plant's generating units, which were built in the early 1970s by the Czech company.

India has been a traditional market for Czech engineering products since the second half of the 19th century. However, Czech trade with India has not been very dynamic over the past few years. Czech industry and trade minister Milan Urban considers it important for Czech companies to restore their presence on the Indian market. He told Radio Prague that the government was ready to support exports to all the areas that Czech exporters left after the fall of communism in 1989:

"In the 1990's, we lost those markets or significantly reduced trade with these areas. I think it was a mistake. At present, we are trying to return to return to those markets. The government will fully support territories that are in line with our foreign relations, where there are no diplomatic conflicts and we are trying to create conditions to significantly strengthen trade with non-European countries, to restore the original dynamics. First of all, we want to strengthen economic diplomacy, including visits by the prime minister and industry and trade minister to those countries, establishing or strengthening the positions of business attaches at our embassies, and we want to extend the network of offices of the trade promotion agency CzechTrade. The government has also approved a project to finance exports by the Czech Export Bank and the Czech Export Guarantee and Insurance Company so that our products are coupled with competitive financing models."

Skodaexport calls the success of its bid to modernize the Ennore power station a milestone in its history. The General Director of Skodaexport, Jaroslav Hubacek, said that this was a big comeback and a great success. However, there might be an even larger project in the pipeline.

"Nowadays, in India, we can see the start of a very ambitious programme announced by the Indian government. It is called "Electricity for Everybody" and expresses the commitment of the Indian government to develop the electricity sector to an extent sufficient to cater for the needs of the Indian industry as well as ordinary people. It is a huge electrification of India and the plan is to build 2000 MW annually. Getting this contract shows very strongly Skodaexport's presence in India and it shows that Skodaexport can be competitive. Therefore, it is a milestone for us. This is the first time we got a sizeable project - it is not a very big project, of course, but a sizeable one - which shows the capabilities of Skodaexport in competition with a major local manufacturer."

If you use the term milestone, it implies a certain history. What is Skodaexport's tradition in India? 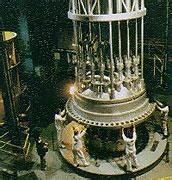 Components for the power station "Skodaexport has been active in India for years. I can say that the contract which we have signed for the modernisation of the power station in Ennore, in Madras, is symbolical in itself. This power station was built in the 60's and 70's by Skodaexport as a new power station. At the same time, technology for manufacturing 60-MW and 110-MW generating units was handed over to India. So, in the 60's and 70's, the construction of the Ennore power station was a joint project of former Czechoslovakia and Skodaexport, and BHEL, a local company to which we handed over the know-how for the construction of 60-MW and 110-MW generating units. At the same time, we also built factories for manufacturing components for the generators.

"Apart from power projects, Skodaexport has been very active in other sectors as well. In the 1990's, we built one of the biggest projects in India, a multi-product pipeline from Kandla to Bhatinda in the north of India - simply a pipeline for transporting petrochemical products. In the 90's, we also supplied a continuous rolling mill for Vishakapatnam steel plant in southern India. It was another huge project. We have completed also several smaller projects. We have our own subsidiary in India..."

I understand you helped develop your current competitor in India... and speaking about competition, what is your success rate in public tenders in India?

"Success rate in public tenders generally is a very low ratio, and it is not only our experience but the experience of all so-called EPC contractors. EPC stands for Engineering, Procurement and Construction, which means that as a supplier, you are responsible for all phases of the contract. The success ration, I would say, is something like one to ten."

One in ten, that means that you must apply for a number of projects to get one. What are your plans, if it is not a business secret...

"When I said one to ten, it relates to the overall number of projects we are offering. India is not the only territory where we are active - we operate worldwide, although India is one of our priority territories because we have a long tradition in that country.

"We have submitted a bit for the state of Jharkhand for a power station 3 x 210 MW. It is, of course, not the only project for which we have submitted our bid. We have submitted several bids last year and the year before. In some cases, we were evaluated as the second best bid, but a silver medal in bid evaluation means nothing actually. I believe that this time, we may be successful. The bids have already been through of the evaluation of techno-commercial part. Our main competitors are BHEL again and a Chinese company. Our offer was found as the best technically. The commercial conditions are being evaluated at the moment and I believe that we stand a very good chance of winning. Of course, the price will show. In India, and probably everywhere, the price is decisive. But I should add that nowadays, evaluation of tenders in India is done on a vary fair basis and the basic price - what we call the EPC price - is always loaded by technical parameters of your offer. It means that the technical parameters are somehow recalculated into money value, so that the final price respects both the price level and the technical level, which is more objective in comparison with purely price-based evaluation."