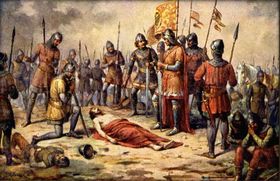 And What’s Happened is back again and this time we go back 737 years to witness the last Battle of Přemysl Ottakar II. It was on the field of Marchfeld, that the Bohemian army succumbed to the combined forces of the Holy Roman Empire and Rudolph of Habsburg began the ascension of the Habsburg dynasty and of Austria. It is still remembered by Czechs everywhere and it is also one of the reasons of the fall of the Premyslid Dynasty. After that we’ll lighten the mood with a Czech joke and a bit of Weather.