Is Central Europe meeting its responsibilities to asylum seekers?

A large number of refugees leaving Slovakia head across the border to Austria. But Austria is also having troubles dealing with the inflow of asylum seekers - its main reception centre at Traiskirchen near Vienna is full to capacity. One response from Austria has been to ask Slovakia to move its asylum centres further East - but will this solve the problem? Kerry Skyring puts the question to Roland Schönbauer - a spokesman for the UNHCR in Vienna. 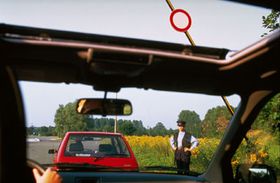 Photo: European Commission "Any solution has to be a joint solution. We have to get beyond a national perspective when dealing with people seeking international protection because they are being persecuted or when dealing with illegal immigration."

Many of Austria's neighbours are joining the EU on the 1st of May and are experiencing quite a heavy intake of asylum seekers. Are they ready for that? Are they able to cope?

"There are two mechanisms at EU level that regulate which country has to deal with an individual asylum claim. That generally speaking would oblige the 1st country where any asylum seekers have been registered to deal with his or her claim. So this has the tendency to push a certain number of asylum claims to the countries, the future countries at the external border of the EU."

So if I can take any example there - some of these asylum seekers are coming out of the asylum centres in Slovakia and crossing the border into Austria. From the 1st of May under this Dublin Agreement, they would be sent back to Slovakia?

"Provided they had been registered there, or there is other proof of them having stayed there. The forthcoming member states of the EU are currently not part of the Dublin 2 system, so Austria cannot send asylum seekers back to these countries automatically. But from the 1st of May Austria will do so - just like the fact that right now, Austria is receiving asylum seekers from other existing EU countries that find out that these asylum seekers have claimed asylum 1st in Austria."

"But our concern as the UNHCR is the following: we think that in many new EU members states, asylum systems are not prepared for higher numbers of asylum claims - because they lack experience, lack resources and they lack personnel."

Are they likely to get any help then from the European Union?

"Well, that was our proposal. During a visit to Dublin a couple of weeks ago, the UNHCR high commissioner Ruud Lubbers suggested an EU solution for this foreseeable problem. The UNHCR is suggesting a certain amount of centralised joint processing of asylum claims in joint EU reception centres for certain categories of asylum seekers. UNHCR is also suggesting an EU asylum agency working out of Brussels that would support individual countries and which would help establish common standards in the procedures."