Asylum seekers and how to deal with the numbers arriving in Europe continues to dominate the headlines: For example, the Dutch parliament approved controversial plans this week to expel up to 26.000 so called "failed asylum seekers" - some of whom have lived in the Netherlands for years waiting for legal status. The move is unprecedented in Europe and has been condemned by human rights groups. But it's not just Western Europe countries that are debating what to do with their asylum seekers - Slovakia too, has recorded an increasing number of asylum-seekers in the last two years. But is it equipped to deal with these people? 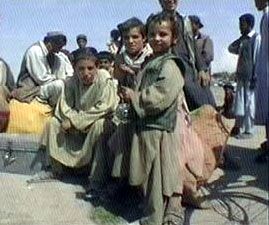 The rows of pretty houses at the outskirts of Gabcikovo, a village less than 50 kms south of Bratislava, are sudden broken by a few dark grey blocks of flats that seem to rise out of nowhere. They were originally built to house workers, during the construction of a dam on the Danube in the 1980s. But now the 4-storey blocks are the temporary home for 720 asylum- seekers - one fifth of them being children.

"I didn't know where Slovakia was located but I came with some people and I just pop in the country. I found this is Slovakia when police caught us and told us we were in Slovakia. I travelled for a month to arrive here."

Salat is 24 years old and has come on a long journey from Somalia. He used to be a footballer in his country. If granted asylum in Slovakia he wants to try to make a living from football here, as he does not have any other qualifications. But for the time being though, he lives on a monthly allowance of 12 dollars plus free food stamps. Last year only 11 asylum seekers out of more than 10, 000 applicants were granted the refugee status. Why?

"Slovakia is not a target country for this people in 98 percent of the cases. They are heading west. They simply abandon the procedure. They are leaving the country illegally by traffickers. The reasons why they left the countries of origin are basically economic reasons. If you have 10,000 people you have to just to look very carefully who is a real refugee and who is just abusing the asylum."

Lucia Heftyova coordinates the refugee programme of a non-governmental organisation based in Bratislava. Her organisation provides the only social worker that the Gabcikovo camp has. Otherwise it is run by three full time employees of the Ministry of Interior as well as ten security agents provided by a private company. Poorly paid and lacking adequate qualification for the job, the staff spends most of their time buried in paperwork while asylum seekers like Salat make plans to leave the camp. Their closest destination is neighbouring Austria whose border is less than 30 kms away from the camp.

"When I see that I have been here for three months and nobody talks to me I just try to go to another country with smugglers. Somebody will come to you if you are sitting here for example. A trip to neighbouring countries costs between 200 and 300 dollars. Some ask even 1 or 2,000. It depends on them, on the Slovak guides."

Unfortunately, many Slovaks - officials included - have begun to assume that all asylum-seekers ultimately want to head further West and so are not prepared to make the effort, to assist those who actually want to stay in Slovakia. But with EU members saying they will reject any asylum-seekers looking just for social benefits, poorer Slovakia may soon become an acceptable country for those trying to build a new life somewhere.