Surfing the World Wide Web in the Czech Republic

The Czech Republic saw the number of people using the Internet rise 10 percent in January, and one person in four now has some regular access to the web. But the numbers are still low in comparison to richer neighbours like Austria or Germany, - and the main reason is the cost. Radio Prague's Rob Cameron has this report from Prague. 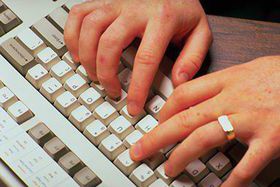 Former President Vaclav Havel speaking to reporters on Wednesday, his first press conference since stepping down a year ago. Mr Havel seems keen to return to the limelight, and promises to become more actively involved in domestic affairs. This being 2004, the former president has just launched his own website - www.vaclavhavel.cz. His successor at Prague Castle, Vaclav Klaus, has had his site for some time.

But these days of online presidents - and former presidents - are a far cry from the mid 90s, when the Czech Internet took its first tentative steps out of the university computer lab and into the real world. One man who was there at the beginning is Ivo Lukacovic. Ivo dropped out of college at the age of 22, borrowing money from his parents to launch Seznam.cz, the country's first Internet portal. Now Seznam employs 150 people, and Ivo has gone from computer whiz kid to serious businessman.

"There were no venture capitalists at that time. The banks didn't want to give you a loan. So that was the major obstacle. But on the other hand, there were major advantages. There was almost no competition, and the expenses were running such a service were low, because the computers were very cheap. So there were also big advantages."

Today, around 2.5 million people visit Seznam each month - more than 70 percent of all Czech Internet users. But overall, Internet use in the Czech Republic remains much lower than in Western Europe. Ivo Lukacovic says there's a good reason for that, and anyway, the figures aren't so bad.

"I don't call it a few people. Right now Internet penetration is around 30 - 40 percent; nobody knows exactly how much it is. We have the highest penetration of all these post-Communist countries, but a major obstacle is the telecommunication fee."

So basically the cost of going online is just too high for most Czechs.

But despite that geeky interest in technology, the Internet remains a luxury for many Czechs. The country's telecom services are dominated by the monolithic Czech Telecom, which many Internet users claim is keeping prices high. And things won't get any better on May 1st, when the Czech government raises VAT on the Internet from 5 percent to 19 percent. That's a move, which is unlikely to encourage more people to go on-line.