The run-down Praha-Bubny train station is now a fairly insignificant stop on commuter train routes going to and from destinations west of Prague. But in the early 1940’s, this was the setting for one of the darkest and cruelest chapters in Czech history. Now there are plans to create a memorial to victims of the Holocaust right in this station.

Helga Hošková-Weissová, photo: Archive of Helga Hošková-Weissová Some 50,000 Czech Jews walked through the small departure lounge at the Bubny station to be put on transport trains taking them to the Łódź ghetto and later to the concentration camp in Theresienstadt, or Terezín. Most were subsequently transported to forced labor and death camps like Auschwitz, where they perished.

Helga Hošková-Weissová was 12 years old when her family was called up for one of the first transports out of Prague, heading to Terezín. Bubny was her last stopping point in her home city.

“I remember it quite clearly. It was December of ’41. It was a freezing winter. It was in the morning and it was snowing. We walked from today’s Veletrzni palace with our luggage all the way here, and I think we went straight to the platform. They put us into the cars in groups of 50. Bubny station, photo: ŠJů, Wikimedia CC BY-SA 3.0 “We knew that our destination was Terezin, but we did not know what it would be like. We were very naïve. We thought we would live there as a family and work, and that it would soon come home, alive. Of course, it all turned out differently. Families were separated right away; and we later found out that Terezin was not the final destination.”

Helga, who is now an artist, drew pictures of what she saw and kept a diary describing her war-time experiences, which was published in book form last year. She still has very clear memories of her departure from Bubny. Terezín, photo: United States Holocaust Memorial Museum “It was, of course, very hard. We were saying goodbye to Prague, and we didn’t know if we would ever come back. I remember how the train would stop and start and we just wanted it to go already, because it was really difficult. But then when it started for good, we were wishing that it would go back for just a little bit.”

Helga was lucky to have stayed together with her mother throughout the war. After a few years in Terezín, they were deported to the concentration camp in Auschwitz, then Freiburg and later Mauthausen. The 16-year old Helga returned to Prague with her mother in 1945. Pavel Štingl, photo: Radio Prague “We came back to Prague also by train, on May 21, at 1:45 at night, I remember it exactly. Then, we got into the Wilson station, now the central train station.”

This month, an NGO called Památník Šoa, organized a small exhibition at the Bubny train station, which they eventually want to turn into a place of remembrance for the Czech victims of the holocaust. Through striking audio-visual presentations, photographs, and documents the exhibit entitled Kaddish allowed visitors to get a glimpse of the experience of those thousands of Jews and others for whom Bubny was the last stop before a terrifying journey to their death.

Pavel Štingl from the organization says despite this well-known chapter in the city’s history, Prague does not have a place where these events and their consequences are being discussed, which is why they want to create a new center at the Bubny train station: 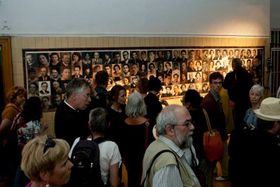 The Kaddish exhibit, photo: Archive of the Shoa Memorial “We don’t want to create some sort of burial grounds here in the middle of a modern new neighborhood that is being planned here. We want to create a forum for discussion about questions and the stigma of those events that is relevant to the young generation today. Of course, we are still searching for the answers, but even that search needs a place, and that’s what we want to use this train station for.”

The Kaddish exhibit in June was on the one hand a presentation of what the future Shoa Memorial could look like, but also it was an opportunity for the organizers to begin a discussion about what should be created there and how to attract a wider audience. Artists, holocaust survivors and visitors took part in afternoon discussions about what a modern holocaust memorial should be like. Photo: Archive of the Shoa Memorial “It is clear that time has come to look for a new language. The generation of holocaust survivors is leaving us, along with their legacy. While the survivors are still around, their stories don’t need any artistic accompaniment. But once they are gone, just showing films about them doesn’t have the same effect. So we need to find a new way to talk about this very significant topic, which is also similar to events we are living through today.”

For Pavel Štingl, who is a documentary filmmaker, the topic of the holocaust is not a new, it is both part of his family history and his work as well. But he still finds it almost incredible how the Shoa Memorial project has come together so far. The Kaddish exhibit, photo: Archive of the Shoa Memorial “It’s all a bit bizarre. I grew up here, just a street away. I used to go to this train station to watch steam trains; I learnt how to smoke here, we would fool around here with the other boys. And I could have never imagined that I will one day be setting up a memorial here, even though my family went through Auschwitz.”

As he looked for a space that could be appropriate for housing a center for discussion and remembrance, he fell on unexpected good luck. 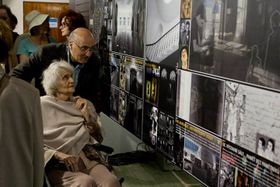 The Kaddish exhibit, photo: Archive of the Shoa Memorial “One day, completely by accident, I found out that this train station, even though it is located in what they are now calling a developer’s heaven, actually still belongs to the state-owned Czech Railways. When we started negotiations with Czech Rail, it turned out they didn’t want the station, but couldn’t easily sell it, and were very happy if a cultural institution were to appear there.”

The somewhat ramshackle area in the Holešovice neighborhood where the Praha-Bubny station is located is slated to be turned into a large-scale modern development, with offices, residential housing, and shopping centers. Pavel and his colleagues were surprised to find out that their plans for the Shoa memorial did not interfere with the developer’s plans, at least so far. A commercial project of that scale has to legally contain a cultural element, and a holocaust memorial center at Bubny would fulfill the developer’s obligations. The Kaddish exhibit, photo: Archive of the Shoa Memorial For now, though, members of Památník Šoa and their supporters are trying to come up with a viable plan for the future of Praha-Bubny. Pavel Štingl hopes that this will not be a memorial or a museum in the traditional sense, which would dissuade visitors who have not personal connections to the topic.

“I want it to be a sort of ‘contact center’, I think that’s a better definition than a memorial. I want people to want to come here, not only as part of mandatory school trips. I want there to be discussion about topics that are relevant, that would make the people who will live here in the new building want to cross the street, go under the tracks and visit this meeting place.” The Kaddish exhibit, photo: Archive of the Shoa Memorial Although the Kaddish presentation received a very positive response from visitors and the media, the Bubny train station project will take some time to realize. The reconstruction of the surrounding area, including the railroad tracks going past the station, will take quite a few years to complete. And there is always the thorny issue of funding. But, as the organizers had hoped, the exhibit at this small station kick off a fruitful and necessary discussion that is bound to continue.

The episode featured today was first broadcast on June 25, 2013.