This year’s Jihlava International Documentary Film Festival, which came to a close on Sunday, was the 20th edition of an event that brings almost the entire Czech documentary community – and a host of noteworthy international guests – to the Vysočina town. In this roundup of Jihlava 2016, we meet a main prize winner, the head of the festival, leading US experimental filmmaker Bill Morrison, and Rebecca O’Brien, who has worked closely with Ken Loach for almost 30 years. 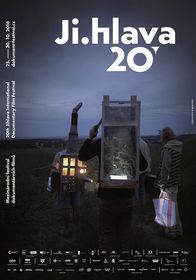 The former centres on the organisers of a soccer club made up of members of the Roma ethnic minority that other teams often refuse to play. Speaking at Saturday’s award ceremony in Jihlava, Bojar said the documentary explored underappreciated aspects of racism.

“If there is something like a so-called message, it’s probably that racism or a racist attitude is in most cases rather absurd. Even though people resist this idea, it can sometimes be very funny. And at the same time quite scary. So yes, we wanted to show the ambivalence of racist attitudes.”

Celebrating Jihlava’s round anniversary, a retrospective exhibition on the town’s main square looked back at two decades of the country’s premier documentary event. As we stood beside the display, I asked founder and director Marek Hovorka when he first felt it could become a viable, professional festival.

“It was from the very beginning. Not before the festival, because we didn’t know what to expect.

“But the reactions, not only of the audience but also of the directors – who were very happy that they could screen their films and meet the audience – somehow made us continue.

“We felt a little bit ‘little’, but still a responsibility to continue and share this experience – to create a place where they can screen films and meet viewers.”

Has the audience grown older with the festival? Or is it being constantly being renewed by students? 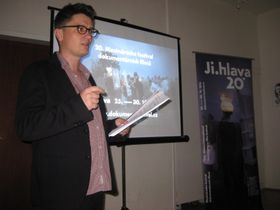 Marek Hovorka, photo: Markéta Kachlíková “When we did a survey a few years ago, we found out that two-thirds of the audience come back and one third is a new audience.

“Which is pretty nice, because it means that there is the strong potential of inviting a new, younger audience, students – maybe not even younger people, but a new audience for documentary films.

“But it also means that when people come back you can work with them – they develop their sensitivity for documentary cinema.

“So we can have great diversity – from big thematic documentaries to very fragile, creative authorial documentary films or experimental cinema. The public is prepared.”

Perhaps illustrating Hovorka’s last point was a special section this year showcasing the work of US experimental filmmaker Bill Morrison. Morrison collaborates with leading composers and musicians, such as Steve Reich, Philip Glass and Bill Frisell, while his Decasia was the first 21st century film to be included in the Library of Congress’s National Film Registry. Like his other works, Decasia is based on timeworn found footage, which the artist reimagines and manipulates. I asked Morrison what kind of archival materials typically drew his attention.

“I come out of painting, so the first thing I’m looking for is, does the image look good?

“In that I’m not just looking for an interesting image as it was photographed, but what has happened to it over time. 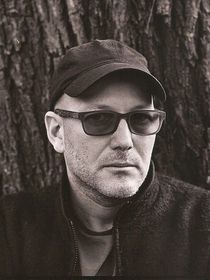 Bill Morrison, photo: archive of Jihlava International Documentary Film Festival “If I’m looking for emulsion deterioration, then how is that deterioration interacting with the image? Is it just obliterating it, or is it becoming another character? Is it going within the contour of the image or is it wiping the image out? That’s a first consideration.

“Then there also concerns of, is it in any condition to copy? What are the rights issues? What are its physical attributes? And, how available is it?

Is it ever an eerie feeling manipulating actors or other people who have been dead for a very long time?

“There is this idea, I think for the people watching my films too, that you’re looking through the veils of time.

“Of course, cinema has this quality to it anyway. I think you’re just more aware of it in my films, because you see those veils of time embodied in the deterioration of the footage itself.

“So you are quite physically removed from the character, whereas if it has been well-preserved or well-photographed, that separation doesn’t exist as much.

“There is something eerie to it. Especially with children, because you think, That person isn’t even alive any more. 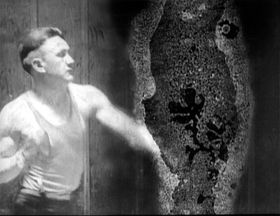 'Decasia', photo: archive of Jihlava International Documentary Film Festival “Or when a character makes absolute dead eye contact with the camera lens so that they’re looking through time.

“So there is something like that and I have to say I’m drawn to those moments.”

If we could talk about Decasia, you first feature length film. It’s a very heavy film and there is also very intense music throughout it. What state does that typically put the audience in? Or what would you like the audience to take from this rather intense, perhaps even trippy, experience?

“For the people who allow themselves to go with it – and that sometimes requires watching four minutes of camels walking from the right side of the frame to the left – your mind can wander.

“I think the film gives you that space. You understand very early on that you’re not going to be led by the hand, apart from some sort of vague connection between the mortality of the film and our own mortality.

“Especially because of how the music changes at the end. It becomes very, very intense and then there’s somewhat of a release. So that the people who make it to the end of the film feel like they’ve survived something – and there is this kind of relief.” 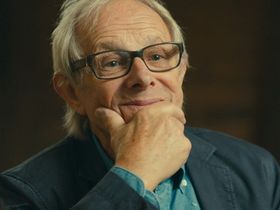 'Versus: The Life and Films of Ken Loach', photo: archive of Jihlava International Documentary Film Festival Among the 200-odd films screened at Jihlava this year was the excellent documentary Versus: The Life and Films of Ken Loach, which was introduced at the festival by the UK director’s producer of almost three decades, Rebecca O’Brien. Loach, who is now 80, is one of a small number of directors to have twice won the top prize at Cannes, most recently this year for the thought-provoking social drama I, Daniel Blake. I asked O’Brien what qualities she felt distinguished the left-wing filmmaker.

“I think what sets Ken apart is his consistent approach. He’s consistently political. He hasn’t changed an inch in the period that I’ve known him.

“I think he’s simply developed his arguments more and more strongly over the years.

“I think that unswerving doggedness is what is different from other directors.

“But so also is the fact that the projects are all political and never art for art’s sake. That’s another big difference.”

In the film one of the speakers describes him as the most subversive director in the UK. Was he at his most subversive when he was doing those early TV dramas, those TV plays, which were seen by almost half the country? Now I guess when he releases a film it’s kind of for “the Ken Loach audience”.

“I would have agreed with you if it hadn’t been for I, Daniel Blake.

“It opened in the UK last weekend and is causing such an outpouring of people’s feelings because with that film we seem to have alighted on a hidden issue, which is people who have been so humiliated by the benefits system in the UK that they haven’t been able to speak out – and suddenly with the film they’ve found their voice. 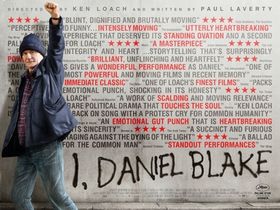 Photo: Sixteen Films “So I think the fact we’ve alighted on this issue is quite subversive. It’s definitely building a groundswell of opinion that something really needs to be done about it.”

The documentary makes reference to Ken Loach’s love of Czechoslovak New Wave films and specifically Miloš Forman. What did he take from them?

“I think he basically stole a lot of techniques from them. The Czech New Wave was really important to Ken.

“With the cinematographer Chris Menges, who had studied the Czech New Wave, he discovered all sorts of very simple devices of telling the truth on screen.

“The idea of looking at people from eye level, rather than from below or above, actually looking at the subjects in films from a human perspective. Taking the camera back and using a long lens, for instance, and using completely natural sound. And lighting in a way so that the lights are unobtrusive, so they feels as natural as possible. All of those techniques were developed by the Czech New Wave.

“So that legacy is of huge importance to Ken and the work that we’ve done.”

Ken Loach is famously popular in France and this year he won at the Cannes festival for the second time, at the age of 79. Why do you think it is that he is, at times at least, more respected outside the UK?

“I think there are a couple of answers to that. One is that I think everybody who’s grown up in Britain seems to have seen Kes and they think, Oh, I’ve seen all of Ken Loach’s films because I’ve seen Kes.

“In a way the mark he made in the 1960s was so deep and then his work was less feted as the years went on, particularly in the 1980s, and he never clawed that back.

“Although again I think that may change with I, Daniel Blake, because suddenly there’s a big audience for the film.”

He came out of retirement to make I, Daniel Blake. Now he’s 80. Do you think the success of this latest movie may encourage him to keep going and do more?

“I think he’s realised that you can’t just hang up your football boots – you’ve got to keep going, if you can. And there’s too much to explore, too many stories to tell, just to stop.

“In whatever way he can, I know he would love to keep going. He often says to me, Oh God, I’m so envious of you, I wish I was 20 years younger, because there’s so much still to do.

“So I wouldn’t be surprised if we come up with another one.

“Physical health is always an issue. When you get old bits just start falling off. But there’s no mental desire to stop at all.”