Martina Formanová, the wife of the famous Czech director Miloš Forman, was recently in Prague to launch an audio version of her novel, called Případ Pavlína, or Case Pavlína. The book, which was released a few years ago, tells the story of the Czech-born 1980’s super model Pavlína Pořízková and her family’s dramatic escape from Communist Czechoslovakia. “Paulina’s parents emigrated three days after the occupation of Czechoslovakia in 1968 and they decided to leave without their daughter so most of the book is actually their attempt to get Paulina out of Czechoslovakia.”

“They left on a motorcycle through the Austrian border, which happened to be partially open at the time. They weren’t even sure if they were going to make it through the border which was one of the reasons why they didn’t bring their daughter along.

“Once they came to the Austrian side, they were told that they were political refugees and couldn’t go back to Czechoslovakia so they just file some paperwork to get their daughter and thought it would take you know, a week, two weeks, a month, but nothing was happening.

“They moved to Sweden, that was the new country, and they kept trying to get their daughter. I must say this was not the only case of parents who left their children behind, it was more than 300 cases.

“The communist regime tried not to make an example of releasing those children to their parents, so when parents went abroad they kept the children here to make sure that the people returned.

So how did the parents eventually reunite with their daughter?

“It was a little more complicated, because Paulina’s mother and father got really impatient and they decided to protest in front of the Czechoslovakian embassy in Stockholm. They went on a hunger strike, but again nothing happened.

“Then two young guys with access to a private plane came to the parents and said they were willing to go to Czechoslovakia and kidnap Paulina and bring her here, so they decided to go along with it. The mother ended up flying with those pilots in disguise.”

“My husband likes my sense of humor and he is very kind to me when it comes to criticism.”

And I believe she was also pregnant at the time…

“She was five or six months pregnant with their second child but actually didn’t know that the secret police was very closely observing the house where Paulina lived. So, they ended up stopping them and throwing them in prison.

“But what happened was even more media frenzy because suddenly this mother who was pregnant with her second child who was trying to see her daughter is being thrown into jail.

“So that was unsustainable for a longer period of time so she was in prison for three weeks and then she was released. But she had the police following her everywhere and it was really amazing what could happen to one family with one bad decision. For the sake of the family, it had rather bad consequences.”

How did you actually get the idea to write about Paulina’s life and her parents? Did you know her from the United States where she lives?

“We met in New York, because we are similar age and we both have two sons of similar age and both have older husbands who have their own artistic careers so we have quite a lot in common. And besides everything else, Paulina also wrote a book in English, Model Summer.

“It was a very good book, but modeling surprisingly. So we became instant friends I must say as we were talking about our childhoods and I just became more and more fascinated with this story.

“So at some point we met for lunch and I said, “Paulina I have a question feel free to say no, but would you mind if I write your story?” And she was like: “Well it’s yours. I lived it I definitely don’t want to go through it by writing it. But I don’t know enough about everything that happened and I think it would be easier if you contact my mother.” 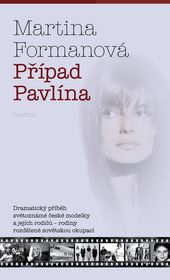 Photo: Prostor publishing “So after that, I got more information and got in contact with Paulina’s father, and I also came to Prague and I went through the archives of the secret police.

“I spent quite a lot of time there, because there were all of the interrogations of Paulina’s mother and of the two Swedish pilots who actually spent over two years in prison and I can’t even imagine how that must have been for them.”

When you approached Paulina’s parents, did they immediately agree to tell you about their lives?

“Well, I think that there was some hesitation on both sides. I first met the mom and I think we liked each other and she felt comfortable. I also told them that as I start to write, I’ll keep sending them the pages to make sure that I’m telling their story properly.

“And then I started to communicate with Paulina’s father, and I think for him it was more my husband who made it sounds like it must be okay if he married me, so you never know what’s going to help you.”

And what was it like going through the archives of the secret police, have you discovered something that was surprising even for the parents, something they didn’t know about at that time?

“Many things, I must say. It was actually really unbelievable because as I was putting the story together from so many sources, I think all of them had found things they had no idea that happened, or how they had happened.

“I think the biggest compliment Paulina gave me when she read the book was that so many of her questions have been answered, starting with the relationship of her parents.

“The parents split shortly after Paulina, her mother and the son (who was been born in Czechoslovakia) were released and moved to Sweden. Ironically, the family which fought so hard to get together fell apart as they finally succeeded.”

Are you thinking of doing a follow up, because this book obviously focused more on Paulina’s parents. So have you been thinking about it, have you discussed it with her?

“I would love to do that, but first of all Paulina is a very private person and she wouldn’t like to do that. And if she had any thoughts about it I’m sure she would write it herself, so I’m out of it one way or the other.

“It was really amazing what could happen to one family because of one bad decision.”

You came to the Czech Republic to launch your new book of short stories called Na tělo, can you tell me more about the book?

“I must say that I projected myself in Paulina’s story on so many levels. When I finished it, I also wrote a screenplay based on the story, which is now with some Danish producers and hopefully something comes out of it.

“So when I finished, I simply didn’t feel like starting a new project. But I had a lot of interesting ideas: various characters and situations I thought would be nice to explore.

“So I decided to write short stories where I had the chance to explore all those different characters and different situations. I had a lot of fun writing it, I must say. It gave me a lot of freedom to dip into different kinds of lives and I hope the readers will have fun reading it.”

When you’re writing books, do you actually discuss them with your husband, does he serve as a sort of advisor for you?

“I wouldn’t say I discuss it with him, because I have to be convinced that it is what I want to do. But he is the first one who will tell me: “Okay, go sit down and write it if you’re excited about it.”

“I definitely tell him what I’m working on and he reads it, and I must say he is a very kind critic to me. He likes my sense of humor I would say, he’s very kind to me and gentle when it comes to criticism.”

You said you divide your life between New York and Connecticut, so where do you spend most of your time these days?

“Originally we lived in New York, and we spent the weekends in Connecticut. But when the boys started school we had to decide if it would be in Manhattan or Connecticut. And with two boys it seemed easier to be out in the country rather than in the apartment.

“They already finished high school, so sometimes we go to New York for weekends, but my husband loves the country so much. We have three dogs and four cats, so our life is really in Connecticut now. I would say the apartment is more used by our sons who are exploring the city life.” 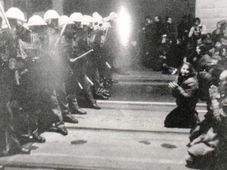 November 17, 1989 reconstructed through testimonies of 300 participants in new book

In a remarkable work of oral history, four students with the help of former dissident and award winning author Aleš Palán have produced…