Nine prisoners among runners participating in charity half-marathon in Prague

More than 70 athletes, including nine prisoners and one ex-offender, are set to run in the Yellow Ribbon half-marathon in Prague at the weekend. The first of four races, the event highlights the importance of supporting the reintegration of former offenders within broader society upon completing their sentence. The charity race takes place on Saturday as part of the broader Sportisimo ½ Marathon. 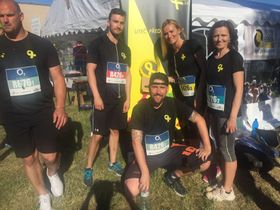 Photo: Vojtěch Koval I spoke to Kristina Labohá, spokesperson for the Yellow Ribbon Prison Run, about the need for prejudices to be overcome and also the event’s origins.

“The run began as a Yellow Ribbon project in Singapore in 2004 and it does not include only the run itself but art events and accompanying concerts, with the aim of supporting the reintegration of prisoners into society. The aim of the run, whether it is in Singapore or now in Prague, is to advocate a second chance for ex-offenders and their families and the reintegration of former prisoners after their release.

“In Singapore, the project is organized by the state organization called C.A.R.E. (which stands Community Action for the Rehabilitation of Ex-offenders) for and has now been going on for 14 years. The idea caught on in a number of other Asian countries and of course we also have it here in Prague.

“The biggest event though is in Singapore.”

How did the idea take root here?

“Our partner from the Czech prison service Gábina Slováková, the governor of the biggest women’s prison in the country in Světlá nad Sazávou, was in Singapore for a conference in I think 2011 and the run was taking place, and she told us later that she immediately fell in love with the event. She saw how big a day it was, with thousands of people taking part, and she felt that it would be a good idea to bring to the Czech Republic. It took some time of course before things could be implemented.”

“Many Czechs aren’t keen on programs for ex-prisoners but the situation is getting better.”

From what you are saying, the event is about the rehabilitation and reintegration of prisoners, who need help after their release or even before, to get on track, to try and build news lives.

“That’s right. It isn’t always easy to convince people just how important that helping hand is: the climate here is such that many Czechs aren’t keen on programs for ex-prisoners. People support the state helping for kids or the elderly but generally take a hard line on prisoners and support stricter policy. But there are many prejudices although we think that the situation is getting better.

“In part, low unemployment has maybe played a role and companies are interested in hiring even former prisoners now who want to prove they can start again, they can be loyal and trusted by firms and their families. The Yellow Ribbon Run helps break through prejudices and firms that have already hired former offenders who now do a good job also help and the word spreads. 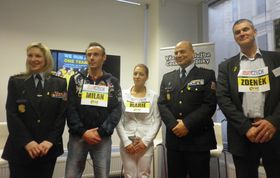 Photo: Zdeňka Kuchyňová “One thing to remember is that every year roughly 10,000 – 11,000 prisoners get out of jail and these people may be your neighbor or your co-worker, so you really have to give them a hand to reintegrate. It can’t be just up to the state. In Singapore, prisoners have a saying that after release they enter a second prison or began a second term and it can be very hard to live a normal life because of prejudices.

“I was in Singapore myself and saw the event and think that it has really changed Singaporean society and how they view the problem. More and more it is understood that ex-offenders benefit from the support, that it can be the difference between them starting a new life or being rejected, which only increases the likelihood of them committing a crime again.

“Just last month, there was a report just last month by the Council of Europe which stated that Turkey and the Czech Republic have the highest prison populations in Europe. The solution is not for everyone to remain behind bars and you can’t put everyone behind bars.”

If someone commits a crime, their sentence is the payment. Once you have paid the debt to society, you should be allowed to return as a full-fledged member and not continue to be punished for something you paid the price for already.

“More and more, it is understood that ex-offenders benefit from such support and that it makes a difference when starting a new life.”

“We focus on that message. After their release, ex-cons should be treated like everyone else.”

This year is the third time in the Czech capital?

“Yes, that’s correct. It began in 2016 and in the beginning it was organized by the Czech Prison Service together with the NGO Rubikon. Later, the Probation and Mediation Service and some other partners on board; in the first year there were some 30 runners and this year we will have some 600 runners altogether, counting four different races.”

The first event, the Prague half-marathon takes place this weekend…

“That’s right. Some 70 people will be taking part as part of the Yellow Ribbon run, nine of whom are actually prisoners who are nearing the end of their sentences and have been allowed to take part. In all, there are four runs and the most important difference is that some prisoners are allowed to run. Singaporeans who come to Prague to participate are amazed by that because they don’t have that.”

There are all kinds of interesting aspects there: who gets to run and what factors play a role? Photo: Filip Jandourek “It is common for people to think that the only runners who get to take part are doing time for lesser crimes but that isn’t necessarily the case. This year we in fact have two male prisoners who are serving sentences for heavier crimes: one for grievous bodily harm and the other for murder.

“In most such cases, they are nearing the end of their sentence. It is up to the Prison Service itself to decide who can run, based on the prisoner’s history, evaluations throughout their sentence, and of course they have to be certain they don’t represent a threat and that it is safe. The offenders themselves of course have to be in good health and have to be fully motivated.

How do the prisoners train?

“That is one of the incredible things: apart from one or two official trainings of around 10 kilometre runs outside the compound, they train short distances in the courtyard. When they were outside for a brief run, they were accompanied by guards. SO both the prisoners and the guards train, so to speak. And that is how they will be running in the race at the weekend.”

There will be guards running alongside the offenders…

“The spirit of running is not just about sports.”

The promotional material emphasizes the importance of this: the message is one of inclusion and acceptance – that is what matters.

“The message is clear. When you look at the photos, you can’t tell who is who. As for prisoners running: it is great motivation and gives many of them a clear goal or hurdle to overcome. Running long distances is proof for them that they can keep a promise for themselves and their families. The spirit of running is broader and it is not just about sports.”