Jan Stodola is an outdoor skating enthusiast and one of the authors of an unusual guide to natural ice skating in the Czech Republic. I met with him to discuss his experiences with Nordic skating and about some of the country’s best spots to skate in the outdoors: 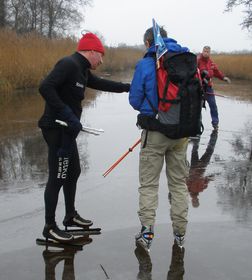 Nordic skating in Netherlands, photo: Kr-val, Public Domain “In the Czech Republic we have very versatile landscape as well as geology and geography. Every several kilometres or miles we have a different climate and different landscape.

“That means we can find places for skating almost everywhere. Even if the conditions are not very good at one place, they are excellent in another. And we don’t have to travel very much to find really good ice for natural skating.”

Most people associate Nordic skating with countries such as the Netherlands or Scandinavia. What are the conditions for Nordic skating here in the Czech Republic? What are some of the best places for ice skating in this country?

“I would say that in the Czech Republic we have perhaps better conditions than in most parts of the world. Scandinavia is maybe a little bit boring. It’s mostly flatland with some big lakes, very similar one to another.

“Here we can find historical quarries, small and big rivers, huge lakes, dams, mountain lakes, frozen wide water and so on. And there also old bridges, castles and other objects developed by people close to the ice.

“So I would say that we have really good conditions. Compared to Sweden, where Nordic staking is the most popular winter sport, we have the advantage of having at least some ice at any moment during the freezing weather.

“While in Sweden, if it snows, then it’s covered with snow and you have to travel for many hours to get some good ice. While here, it can be one hour to reach perfect ice.”

How many kilometres have you covered on skates in the Czech Republic?

“I started about 30 years ago and since then, I covered thousands of kilometres. This season has been short. Winter started in the first half of February and so far I covered about 250 kilometres, which is not many. But over those 30 years, it must be a lot. But I have never kept track, really.” 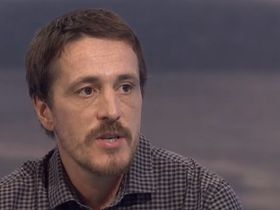 Jan Stodola, photo: Czech Television What are some of your favourite skating spots?

“We have very beautiful areas. Probably the best is the huge lake of Orlík, south of Prague, on the Vltava River. If the conditions are good everywhere, you have a perimeter of approximately 200 kilometres. There is beautiful nature and architecture.

“But we also have some industrial places on the Elbe River, through Neratovice chemical plant. It is not that beautiful but it’s definitely interesting and then we have some small places and small rivers. I would say that whenever we can find ice, it is the most beautiful place for the moment.”

Who brought you to Nordic skating?

“I think it was my own idea. When I very little, I used to skate on our small town pond. I couldn’t skate very well and skated only in winter. Then, at the university, I had a friend living by the Orlík lake, so I tried skating there. And then I started doing that with my friends.

“At first we used regular hockey skates but about 15 years ago we discovered Nordic skates and since then, it’s much more comfortable, faster and easier.”

So what is the main difference between the Nordic skates and the ordinary skates? Is the length of the blade?

“The biggest advantage is that they have a binding, like cross country skis, and you can easily dismantle them or even switch them for cross country skis. If you have snow on the ice or on the land, you can use the skis to get on the ice and switch for the skates in several seconds.

“I always say that if you go skating on natural ice, you must be prepared for swimming too.”

“We have a lot of ponds in the Czech Republic. In South Bohemia, there are hundreds of ponds. You can easily cross the land on your boots and then put on your skates again.

“Plus, the Nordic skates are kind of speed skates, so it goes much faster than hockey skates. So these are the biggest advantages, I would say.

And I imagine you also have to carry all kinds of safety equipment.

“We of course have some safety equipment, but not much. I would say the only necessary item are safety picks or pointed handles which help you get out of water in case the ice breaks. It’s good to have a rope, too, and a small pack of extra clothing. That’s all we need, really.”

When did you start with Nordic skating?

You are running a website which informs about ice conditions in the country. When is it safe to skate on ice, from your own experience? Have you ever fell through the ice? And what do you do in such a situation?

Have you ever experienced falling through the ice? 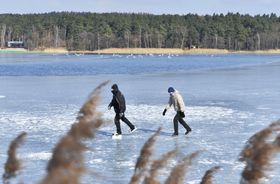 Illustrative photo: CTK “I think that expect for the cases when I did it on purpose, for training purposes, I don’t think I ever had a real accident. Maybe last year, I had my first unexpected accident.

“We need to count with his possibility. I always say that if you go skating on natural ice, you must be prepared for swimming, too.

“Some of my skating friends break through the ice more often and some less often, but it happens very seldom.

And from my own experience, when is it safe on open ice?

“It is hard to say. There is no basic rule. Our first skating this winter was on a lake where the ice was about three centimetres thick. It was freezing and there was a so-called fresh ice. So it was on the edge, but no-one fell through.

“And then you may have thick ice, which is not that thin but you can still fall through, especially in spring or during non-freezing temperatures.

Have you also skated elsewhere in the world?

“I have several rarities. Maybe one of the most beautiful skating areas is the Hornád River in the Slovak Paradise. It’s a little bit difficult, because there a lot of rapids.

“I skated a lot in Sweden. I met some skating guides there and I learned a lot from them. About 20 years ago, I studied in Washington DC, so I skated on the Potomac River, and also on one lake in the mountains of California, but the skating was limited due to snow.”

What do you like about ice skating so much? What is so fascinating about it?

“Probably the best place for skating is the huge lake of Orlík on the Vltava River.”

“Normally, you can’t see the landscape or the countryside, while you are on water, unless you are on boat. Last year, I was on some frozen lake in Slovakia and there was a little bit of water on the ice. And some people came by and told me: You are like Jesus Christ, walking on water. So I told them: Come on Peter, and try it.

“Since Biblical times, I think people have been fascinated by walking on water, and skating is technically walking on water, especially when there is small layer of water on the surface. And the view of the country is completely different.” 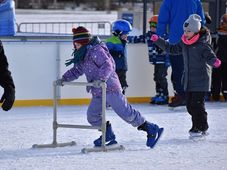 While most of the Czech Republic saw heavy snowfall with the start of the New Year, Prague remained mostly dry with not a snowflake… 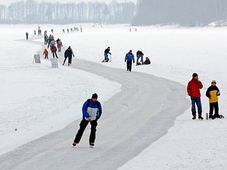 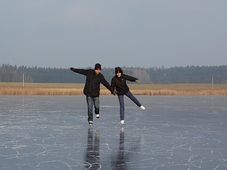 The day after this New Year’s Eve many Czechs awoke to pristine weather: a blue winter’s sky sometime rare in early January, a perfect…