Still steamed-up on the river after 150 years

This year, it is 150 years since the first steamboats started to cruise the waters of the Vltava River in Prague. While back then, steamers were used mainly as a means of transport, nowadays they belong among the city’s most popular tourist attractions. I met with the head of the Prague Steamboat Company, Štěpán Rusňák, to talk about the company’s history and its present-day activities, but I first asked him how they endured the recent drought: 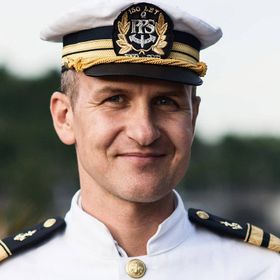 Štěpán Rusňák, photo: archive of Štěpán Rusňák “Well in comparison with other European cities we have a great advantage, because our ancestors were so clever that they constructed a very efficient system of locks. Thanks to these constructions on the Vltava River, we don't have troubles even during such a dry period as we recently experienced in Prague.

“In these days, we actually have more troubles with floods, which have been coming more and more frequently since 1997.”

How many lines are you operating these days?

“The Prague Steamboat Company is the only company in Prague which will show you part of the Vltava River all the way from the Slapy reservoir to Mělník.

“There is a boat running six times a day from the Rašín embankment close to the Dancing House that will take you through the central part of Prague to Prague Zoo. It is one of the most popular lines.

“Every weekend we are running a historical line which also starts at the historical pier at the Rašín embankment and goes upstream to the Slapy area. We have been running this line for 160 years, since the founding of our company. So that's also a very popular line.

“And twice a week we also offer a whole-day trip on our steamers leading down the river to Mělník, which is a beautiful journey.”

Do you actually have any of the original steamers from the days when the company was founded?

“Since 1865, when the company was founded by the mayor of Prague, František Dittrich, we operated 42 steamers, boats which had a traditional shape influenced by the specific conditions of the Vltava River in Prague. They were powered by original steam-machines and two of them survived to this day.

“The Prague Steamboat Company is the only company in Prague which will show you part of the Vltava River all the way from the Slapy reservoir to Mělník.”

“These two boats were exceptionally well-preserved and they are listed in the register of the country’s National Technical Monuments.”

This year Prague Steamboat Company celebrates 150 years of its existence. How has it changed over the years?

“When the company was established, people used our boats to transport goods from the Prague suburbs to the centre, mainly to the markets. They also used them to commute to work.

“Nowadays, as I have said, we offer leisure-time cruises, for Prague people, for visitors and for foreign tourists as well. So nowadays, we focus on leisure-time activities.”

At the same time you have just launched a new ferry in Prague which connects two of the cities' districts, which is intended mainly for the locals.

“After 45 years, we started operating a ferry called Holka, which consists of the first two letters of two Prague's quarters which it connects: Holešovice and Karlín, with a mid-station on the Štvanice island. So that's Prague's sixth ferry and it has been quite popular during these hot days. Over the past two weeks we carried around 400 people a day.”

How long will the ferry be running? How long is the season?

“The traditional season starts on May 1 and finishes on November 1. This year the ferry will be operating for three months and then the city of Prague will decide whether the line was successful and whether we will continue in the next few years.” 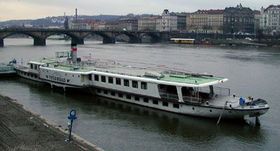 'Vyšehrad' steamer, photo: archive of Radio Prague You are also marking the 150th anniversary by an exhibition at the National Technical Museum. What can be seen there?

“This event has been prepared not only in cooperation with the National Technical Museum, but also with other institutions, such as the National Museum, Archive of the City of Prague, or the National Archive.

“You can see there some unique paintings by well-known Czech artists such as Jakub Schikaneder, Josef Šíma or Karel Holan, who were inspired by steamboats.

“When the operation of steamers on the Vltava River was coming to an end, our captains kept some of the original components. We also collected them from owners and former workers, as well as uniforms and various original documents, so all that can be seen there as well.

Can you tell me a little bit about the history of the Prague Steamboat Company?

“It was founded by a group of entrepreneurs in 1865, who started to mine coal in Buštěhrad. One of the founders, Adalbert Lanna, a very important businessman, was selling and buying timber and sending rafts from the upper part of the river, bringing them to Prague.

When the company was established, people used our boats to transport goods from the Prague suburbs to the centre, mainly to the markets. Nowadays, we offer leisure-time cruises, for Prague people, for visitors and for foreign tourists.”

“He also founded a company with machines regulating the Vltava River. So there was a need of transport from locations around Prague and there was also a need for entertainment of rich people.

“And it was very important to develop hand in hand with other European countries, where steamers were quite common, like England and Germany, so under these specific conditions, Prague Steamboat Company could be founded and during the first decades of its existence, the number of clients were quickly rising.

“The company enjoyed the biggest popularity after the foundation of independent Czechoslovakia. Imagine that during the 1922 season, more than two million clients were cruising the Vltava River on board Prague steamers.”

“We are operating the same number of boats, not all of them are steamers of course, we have got steamers, motorboats, but also solar and hybrid boats, but the number is 26, which is the same as in 1922. And we have more than six thousand clients every year.

“But what is also interesting is the total number for the whole 150 years. We have had more than 100 million clients on our boats since 1865.”

The season will come to an end in a few months. What will you do during the winter months?

“Well, since the 1960s, when water reservoirs were constructed on the upper part of the Vltava River to protect Prague against flooding, the water coming to Prague is a little bit warmer, it has on average four degrees Celsius. That means we really need quite a long period of cold weather for the river to freeze over. 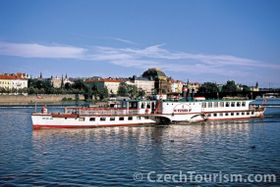 'Vltava' steamer, photo: CzechTourism “So thanks to that we can, under normal weather conditions, operate our boats all year round with the exception of steamers, which have to finish on November 1. During those six months, the crew will work on their reconstruction, clean the steam machines, paint the interiors and prepare them for the upcoming season of 2016.” 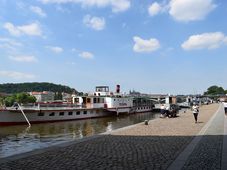 Two hundred years ago today on June 1, 1817, the first steamboat took to the waters of the Vltava in Prague. The attempt to launch… 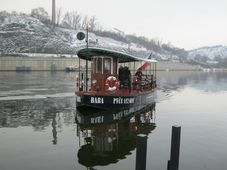 I’m walking along the bicycle and pedestrian path on the right bank of the Vltava river that leads north out of Prague. About two kilometres… 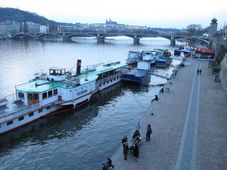 Will water trams one day crisscross the Vltava River?

A candidate for the post of mayor for Prague 5, the Czech News Agency reported this week, has come forward with a novel idea to try…