With environmental issues becoming more prominent, the off-grid movement where dwelling, for example, are reliant on their own sources of power and water, has been gaining more and more support and interest around the world. A new project called Český Ostrovní dům or Czech Island House seeks to raise awareness of self-sustainable living in the Czech Republic. Twelve months ago, they launched a competition for architecture students, asking them to create their own project for an off grid building, and just recently they have announced its first winners. I met with Pavel Podruh, the man behind the project, and asked him to outline its main idea: Pavel Podruh, photo: Barbora Linková “We’re trying to accelerate the rate of usage of cleaner technologies in housing and construction. We’re not a construction company per se. Our main focus is actually communication. By executing a small number of off-grid buildings we want to use the fact that we are building them as a communication to spread the idea into the general public.

“The project is evolved around the idea of how to build more sustainable buildings and constructions. It’s really about the small steps, there is no perfect solution at this point and there will never be. There’s always just a semi-step and that’s what we are trying to do towards a better future.”

Can you explain to our listeners the concept of off-grid houses?

“The concept of off-grid buildings, like the name suggests, is really to go off any engineering grid. The buildings can function autonomously and source their energy from solar power. They started on batteries, speaking in very general terms. This way, they are built cleverly and don’t need to be connected to any type of grid.

“With water we have the same thing, either you source your water from a well but also you store your rainwater and use it a lot in your household to actually limit the usage of drinking water in the household. It’s always funny to think that we are flushing our toilets with drinking water, which I think is fairly excessive given that the levels of drinking water are decreasing all over the world.

“By building off-grid houses that can be self-sustainable, we actually learn techniques that can be used in mainstream construction.”

“So it’s a building that doesn’t need any outside help to function. By building off-grid houses that can be self-sustainable, we will actually learn some of the techniques that we can use in mainstream construction.”

I understand that it is about self-sustainability and reducing costs and reducing our consumption; but what about the cost of such houses?

“There are two things. At this point of course, to build a normal house that’s off-grid, you need advanced technologies. They are more expensive, about 20% more expensive than a usual house.

“But if you think about how electric cars evolved in the recent years; you started out with a few geeks that were into electric cars but there was no demand at all. But then, Elon Musk or Tesla came and wrapped this notion into a beautiful car. In the beginning, the car was really expensive but the coolness of the product actually created huge demand, which pushes on the big guys. And suddenly, Volkswagen and Ford and all the big ones are developing their own, cheaper, electric cars. By this Tesla accelerated transition towards electric cars. 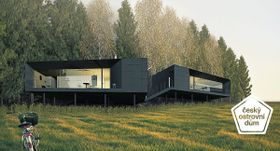 Off-grid house by Vojtěch Lichý, photo: official website of Český Ostrovní dům You launched a competition for university students, asking them to make their own project for an off-grid house. What was the response of the university and how big was the interest of the students?

“We launched this competition at the Czech Technical University. I just came there with a crazy idea; let’s make students think about off-grid buildings. It surprised me how excited the leadership of the university was. We launched the competition together and we got like 80 students in the first year. It surprised everyone in the project how many students were interested and how many projects we received and actually how good the projects were.

“We also have a team of professionals to make it real and they were all saying ‘this is a high level of expertise, put into the student presentations’. So the first year of our project was a really big surprise from this perspective.”

Did the students work on their projects entirely on their own or did they have a chance to discuss some things with the experts that you mentioned?

“Off-grid buildings are only a start of what leads to a sharing society and active buildings.”

“Through the year we had several workshops for the students. We are trying to work with the best professionals in their respective fields in the Czech Republic. We put together a few workshops, where the students could consult their works with the professionals.”

One of the most exciting parts of the project for those who are taking it is that the winning projects will actually be built.

“Actually that was the initial idea; but then we have land with specific regulations from the government. So basically none of the student projects is going to be built, but we picked the best students and put them into a team that is creating a completely new building, regulated by the government, build on the land that we own.

“In the spring 2018 these student projects will start to be built on this land. Because without the actual building the whole project would be just talking, so it’s a vital part of the project.”

What will happen with the house once it is built?

“We are building two off-grid apartments, but separate buildings on one piece of land and we will be running them as a try-out. You want to see how an off-grid building works, just come; it’s very cheap and on a beautiful piece of land, close to the Šumava range. It could be good for family vacation to try out and see that it’s not really that different from what you’re used to.”

Off-grid house by Daniel Brýda, photo: official website of Český Ostrovní dům Where did you find inspiration? Is there any country in particular that is really developed in this area of off-grid building?

“There are hubs of expertise all over the world; they are popping up every day. It really makes me happy to see that we are a part of a movement that’s getting momentum. So I wouldn’t say there is one place that I really look up to.

“Of course the States are really developed in this respect, but also Northern Europe is really good. It’s really all over the world, I don’t think that there is one place, we can all share the basic idea.”

As far as I know, you yourself are not an architect. What was your motivation, how did you get involved in this project?

“If you want to buy an off-grid house it’s a matter of your way of thinking. It’s more about what your ideals are. And I just wanted to build myself a house and I wanted to feel good about my house. It surprised me that there was no one on the Czech market that would fulfil my demand for that. And it went naturally from needing to create.

“When I started I felt support from everywhere I went. People were saying ‘Man, I want this too!’ I started to feel like my expertise could be used in a useful way. It stopped to be my house and it started to be a project called ‘Czech off-grid houses’.

So what is the future of the project, ‘Czech off-grid houses’? 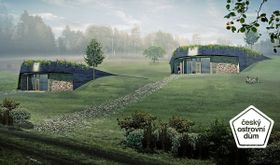 Off-grid house by Petr Čmelík and Martin Stark, photo: official website of Český Ostrovní dům “Each year we’ll have a slightly different topic, last year it was two apartment small buildings, this year we’ll have a normal family house. The year after that, we’ll see, but the topic will always be around ‘off-grid’ and in the future we’ll also think about ‘active’. ‘Active’ means that you’re able to support your household with almost everything but you have more than you need so you share it.

“I believe that if there is a future, it is in ‘active’ buildings – if you have more electricity than you need, you can use the grid to share it with the rest of the people, it makes sense to do this. Off-grid buildings are only a start of what leads to a sharing society and active buildings.” 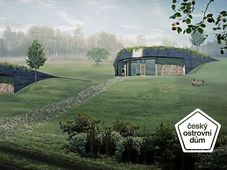 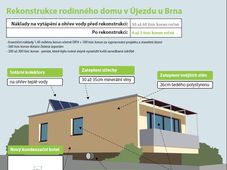 The Czech Republic was a latecomer to the market for energy saving houses and buildings, so called passive developments. By most accounts…

Pavel Podruh, founder of the Czech start-up Self-Sufficient Houses, is the first Czech ever to receive the Outstanding Young Person…