Where are the most unusual places to have a drink in Prague? What are the city’s five best small breweries? And which five river islands are worth discovering? A new book called ‘500 Hidden Secrets of Prague’ gives answers to all these questions and more and invites both tourists and locals to discover places off the beaten track. 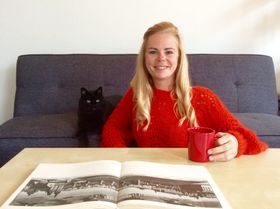 Vendula Havlíková, photo: archive of Luster publishing Its author, Vendula Havlíková, studied journalism in Prague and currently lives and works in Brussels. I caught up with her during her recent visit to the Czech capital and asked her how she got the idea to publish this unusual guide to the city:

“The concept already existed. When I moved to Brussels, I got the book ‘500 Hidden Secrets to Brussels’. And then last year in January I was planning a trip to Paris, so I bought the Paris guide.

“And then I had a fit of insomnia one night, which is when I usually get the best ideas. I was lying in my bed, turning around, and that’s when I thought.

“Hang on a second. They don’t have a Prague guide. Why don’t they have it? They should totally have it. Somebody should write it. And then I thought: Well, why don’t I write it?

“So the next morning I contacted the publisher. Then I wrote them an e-mail stating a few arguments why they definitely should have a Prague guide. After that they asked me for several sample texts to see my tastes are writings skill.s And finally agreed and offered me a contract.

“It sounds easy, but I think it was the first time in my life when I actually thought: I can do this and I can do this well. So I hope it is the case.”

The book is released by a Belgium-based publisher called Luster. How many of these guides have they already published?

“When I started cooperating with them, there were already sixteen of them all around the world. This is however the first time they are entering the central-European geographical space. And together with Prague, Miami, Los-Angeles and Bangkok were also coming out in September.”

How would you describe the book? It is definitely not a guide in the traditional sense of the word… 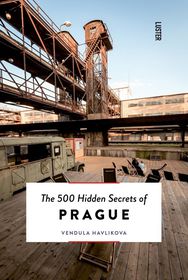 Photo: Luster publishing “There you named the aim yourself, because it is definitely to go beyond the regular guides. It’s supposed to help people to avoid tourist traps. So you will not find anything about the Astronomical Clock, however it might take to some other interesting neighbourhoods in the suburbs, to get off the beaten track.

“It is ideally of course for people visiting Prague, but also people already living in Prague, English-speaking expats or even local people, who want to get to know the city better and make the best out of living here.”

How did you select the places and did someone help you with this process, since you yourself are actually not based in Prague?

“Of course I didn’t come up with all the places myself. It started as a crowd-sourcing exercise. I asked my friends who live in Prague, who know it very well, who work as tourist guides or journalists or who are parents, and have a different perspectives, who gave me ideas.

“Then I selected the ideas that were fitting the concept. Of course the city changed since I have moved out, so I had to re-discover it. I went to some of the places that I knew from before to see whether they are still how I used to know them.

“Then I went to almost all the places. They are not all places, there is also a few tips on how to save money or important dates to help people understand the recent Czech history. There were a few areas that I delegated, for instance to my cousin who is an architect. He walked around the design hotels, because he is definitely more capable to appreciate them. He also understand beer better than I do, I am more of a wine-person. So then he reported back to me. But that was only a small fragment.”

So how long did this process actually take?

“I signed the contract in February and the last finishing touches were done in July. So there were about six months during which I took all of my holiday for this year to spend those days in Prague and I combined it with some bank holiday.

“So when I was here it was really it was really night and day from the very morning until the late night, discovering, drinking coffee and going to various places.”

These 500 places are divided into various sections, such as Five Most Inspiring Bookshops of Five of the Most Unusual Places to Have a Drink. Which of these sections were your favourite ones? 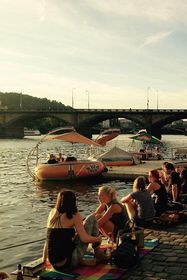 Náplavka, photo: Annette Kraus “That is a tough question. I enjoyed writing and visiting all of them. But maybe the most favourite ones are the remnants of Communist architecture.

“There are many valuable buildings in Prague and even the local people don’t really appreciate their architectural style because of the ideological taint. So that is definitely my favourite.

“I also enjoyed going around all the peculiar shops to discover places where they sell ropes or anything made from rubber. And last but not least, I like a lot the category Cheap Eats.

“Those will take you to places which open at seven in the morning, where you can see the blue-collars having their first beer of the day and a tripe soup, a specialty made of cow’s stomach. So those are really experiences that are worth it.”

And have you yourself made any discoveries?

“I was really astonished when I walked into the Academy of Science and I discovered the library there, because that is really a sight I did not expect. I studied around the corner for many years and never entered the building. And when I did, my jaw dropped.

“For food my all-time favourite now is a bistro close to the Stromovka park, called Milada, which is the closest I have ever been in Prague to the typical French ‘bistronomie’. I admit that I licked plates there, because it is just amazing.

“I have already mentioned neighbourhoods, where I had to do a lot of discoveries. For the first time I went to Malvazinky, a workers’ colony not far from Anděl. I walked around the little houses and felt like in a completely different world.

“I also took a trip to Jižní Město to walk around the Central Park, to talk to people and ask them how they like living there. I ended up having a beer in the Kupa hotel, which is for police and firefighters. There is a restaurant on the 26th floor with a splendid view of Prague and surroundings.

“Many people living in Prague tend to stay within their districts. They don’t really travel to the other parts of town and don’t really know what life is like over there. So in this respect, I would advise them to go.” 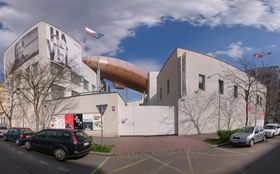 DOX, photo: Till Eichenauer You now live in Brussels. How does life in the Belgian capital compare to Prague? And what do you like most about your home city?

“What I love about Prague is that it combines impossible architectural styles. It was barely touched by the two world wars. It is very green compared to all the capitals I know and has efficient public transport.

“This combination makes it a great place to visit but also to live, which is often not the case. Others capitals that I know very well, such as Paris or London, are great to visit for a few days, But I would never aver live there.

“Brussels, on the other hand, is the opposite. It might not be the most spectacular place to visit, but it’s really nice to live in. It combines a size of a provincial town with the cosmopolitan level of inhabitants. And people who come to Prague from Brussels always say: Wow, it’s so clean.”

What does your perfect day in Prague look like, when you come back from Brussels?

“Coming back to Prague I call it ‘homecation’, because I often take holiday to come home, so it is a combination of vacation and home. I would definitely have a lie-in and then go to have a brunch somewhere. My favourite is Café Lounge in Smíchov.

“Then I would have a walk over the Kampa Island, along the river, check on the peacocks in Vojanovy Sady and then after such a walk maybe have something sweet in the Manson bakery.

This is in the Old Town already, not far from Pařížská Street. It is a Danish bakery that has been there for over 20 years and they have the most amazing chocolate cake called Sarah Bernhardt. 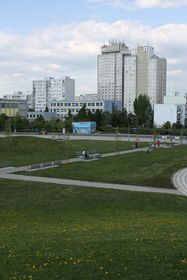 Jižní Město, photo: Barbora Němcová “In the afternoon then I would follow with an exhibition somewhere, maybe some contemporary art in the Dox gallery or Rudolfinum and finish off with a few drinks at Náplavka if the weather permits. If it’s like this, I would probably go and hide in a small cinema and watch a Czech movie.”

Finally, you told me you have to do regularly update The 500 Hidden Secrets of Prague. What other plans have you got into the future?

“In about a year, we should be doing an update. I already have tips for new places that opened. Interestingly enough, this book actually gave me the idea that maybe I could become a writer.

“I started writing short stories, currently about alcoholism, because it’s a social taboo that should be talked about more. Two days ago I had another insomniac fit and I got a new idea for a book. It should be called ‘A Feminist Novel for Men’, but I won’t mention any details yet.”