The manuscript of Antonín Dvořák’s famous cello concerto has gone on display at the Czech Centre in New York, launching a month-long celebration of the centenary of Czechoslovakia. Antonín Dvořák, photo: Public Domain The Cello Concerto in B minor was the last work Antonín Dvořák composed during his stay in America. Now, more than 100 years later, its manuscript has returned to its place of origin, going on display at the Czech Centre in New York. The exhibition is part of a special programme marking the 100th anniversary of the foundation of Czechoslovakia, which will culminate this Friday with a Dvořák recital at the Bohemian National Hall, featuring members of the Czech Philharmonic.

I spoke to Barbara Karpetová, head of the Czech Centre in New York about the upcoming events, but I first asked her to tell me more about the history of Dvořák’s cello concerto:

“Well, Dvořák was not very enthusiastic about the cello being a solo instrument. He did not really believe that a cello would be able to carry the entire concert. Thought it is important to know that cellos at that time looked very different than today. That might be actually the reason why Dvořák was not that enthusiastic.

“Later on, he decided he would compose a concerto for cello. He finished the entire piece here in New Yok, but before he did, his life-long love and muse Josephina had passed away and he decided to incorporate her favourite song into the cello concerto.

“Another interesting fact is that he didn’t include cadenza, which is the equilibristic part of the composition for a soloist. So this cello concerto is very rare and very special and it is also the most often performed cello concerto in the world.”

How was it received when it was performed for the first time?

“I think perfectly well, because whoever knows the music knows that it is really beautiful. It was used as a background music for a variety of films, one of them being The Witches of Eastwick. So the entire music is really beautiful and it was performed here in New York in Carnegie Hall, though not as the premiere.”

Would you say it is equally well-known among the US audiences as for instance, the Symphony from the New World? 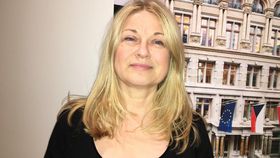 Barbara Karpetová, photo: archive of Barbara Karpetová “Yes, it is. We are really thrilled about that and I am very proud and thankful to the National Museum that they arranged this third manuscript, the manuscript which was in fact conceived in New York, sending it after all of those years (and we are talking about more than 100 years) back to the place of its birth.

“We had Symphony from the New World, we had Rusalka here in the gallery of the Czech Centre New York thanks to the fact that there was a new production of Rusalka at the Metropolitan opera and this time, the Czech Philharmonic are starting their tour in New York playing two concerts at Carnegie Hall, one of them being the cello concerto.

“Hence there is this incredible puzzle falling together that Dvořák, who contributed to the purchase of the Bohemian National Hall, is having his cello concerto coming again and being viewed by more than 140 VIPs.”

What else, apart from the manuscript itself, is on display at the Czech Centre in New York?

“It is an entire exhibition focusing on Antonín Dvořák as a composer who brought to the United States certain ideas about what the national music should look like.

“We are going to have lectures focusing on that. We are also screening a film called American Letters to give insight into Dvořák’s intimate family life and we are having several concerts, one of them being a recital created by the concerto masters of the Czech Philharmonic.”

Why did you choose Dvořák as one of the main topics of the celebrations of the centenary of Czechoslovakia?

“Well, Dvořák still remains to be kind of a bridge between the banks of the Atlantic. He definitely was a crucial ambassador coming from our country to New York and he left an enormous trace in American cultural life and obviously in the entire world’s cultural life.

What other events marking the centenary of Czechoslovakia are planned at the Czech Centre in New York?

“Well, I would say that obviously the most important is the recital I spoke about. We are going to have here the new chief of the Czech Philharmonic, Semyon Bychkov. Alisa Weilerstein, the American cellist, will be playing here and we are also going to have the violinist Josef Špaček playing a solo and a quartet created of two Czech and two American masters. 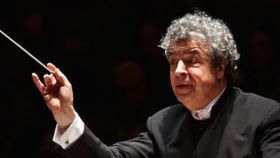 Semyon Bychkov, photo: archive of Czech Philharmonic “We are going to have here as well a person from the Carnegie Hall archive presenting the programme of that time and one of the lecturers from Dvořák American Heritage Association. That is the key programme for us and all the other are kind of contributing to enhance this.

“One of the concerts will be performed by students from the Czech Conservatory and NUY Steinhardt music department. The programme also includes the Czech Beer days. A popular drink of Dvořák inspired us to launch together with embassy a project where the Czech lagers are served in the Czech pub here in the building together with Dvořák’s favourite menu.”

How long ahead did you have to plan these events?

“Well, quite a long time ahead. I would say more than a year. It’s quite a complicated thing to bring the manuscript in and mind you, the National Museum has a huge event on their hands right now, so it was very generous on their side to prepare basic materials for us.

“At the same time, the US tour was obviously planned for a very long time in advance and to coordinate with American PR specialist took quite a long time too. So I would say maybe one, to one and a half year.” 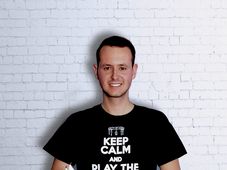