At the surrealist swimming pool

For years I have been going swimming in the pool at Hotel AXA, a to my mind rather bland functionalist building from 1932 that is currently undergoing major renovation. It is located more or less opposite the department store Bílá Labuť, which is of similar vintage and style, on Prague’s busy Na Poříčí street. 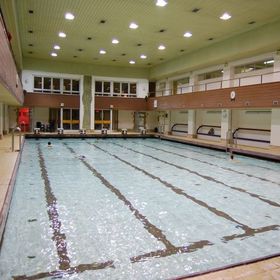 Photo: archive of Lázně AXA AXA’s is a fine 25-metre pool, keenly priced at one crown a minute and convenient for me: It’s only three tram stops from home and if I manage to get out of bed just a little earlier than usual can squeeze in a swim there before work.

Whenever I have a few minutes before heading to the office I grab a cold drink at the small café that overlooks the pool. And it was on such an occasion recently that I spied an intriguing, freshly installed sign on the wall.

The Skupina surrealistů v ČSR (the Group of Surrealists in the Czechoslovak Republic), it read, was established in the café of the AXA Spa on 16.3.1934. Ten days later the group made their existence public.

From then on, the sign reads, the surrealists gathered every Monday at the café by the pool of what must then have been one of the most modern buildings in the country.

A little research – Googling “Skupina surrealistů” on my mobile – turned up the information that the 11 original members had taken inspiration from the second Surrealist Manifesto of Andre Breton, published five years earlier.

Indeed the French writer and poet later visited the Czechoslovak capital at their invitation. The AXA regulars also, according to Wikipedia, established ties with surrealists in other countries and became of one of the most significant of such groups in Europe.

Though I recognised some of the others, two names jumped out at me from the list of founders: Jaroslav Ježek and Toyen.

Ježek was the main conductor and composer for Voskovec and Werich’s legendary Liberated Theatre and later left for New York with the two acting giants. He wrote the music of one of my favourite Czech songs, Život je jen náhoda, Life is Just Chance, with V&W supplying the lyrics.

For her part, Toyen was one of the leading Czech avant-garde painters. She had known Breton and other surrealists in Paris prior to helping found the Czechoslovak group.

It is not clear from the sign at AXA whether the Group of Surrealists ever moved on to another home. In any case, they didn’t last that long, with writer Vítězslav Nezval pulling the plug in protest at the pro-Communist views of other members, in particular art critic Karel Teige.

Another thing that is unclear is whether during their association with the AXA pool café the group actually went swimming. The thought of the radical intellectuals in ‘30s bathing costumes, doing lengths – or, heaven forbid, bombing or ducking – is itself almost surreal. 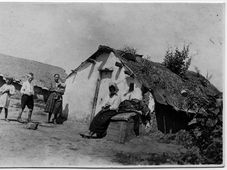 Today’s edition of Sunday Music Show is dedicated to one of the legends of Czech 20th century music, Jaroslav Ježek, who is best known… 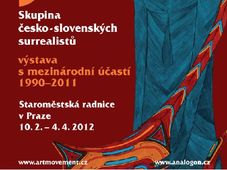 Something is in the air in Prague’s Old Town Hall: An exhibition titled “Other Air” gives the public a chance to see both a retrospective…