Breaking the ice with hockey

Back home in Canada, popular mythology holds that hockey brings people together. Tim Hortons, a ubiquitous chain of coffee shops and a virtual Canadian icon, was probably the first to popularize this message in countless television commercials showing wives and husbands, fathers and sons bonding around the rink over large double-doubles. After all, hockey is our number one national pastime. 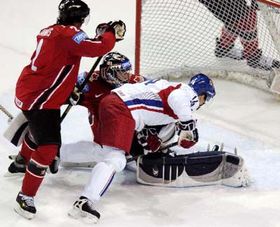 Photo: CTK Personally, I always dismissed the supposedly magical quality of hockey as the stuff of ad executives. After witnessing more than one vicious argument between a Toronto Maple Leafs fan and an Ottawa Senators fan, I was convinced that hockey's effect was more divisive than uniting. However, I was surprised to find, upon arriving in Prague just a few days ago, that there might be something to it after all.

I knew that, next to football, ice hockey is the national sport of the Czech Republic, and many of the best players in the NHL, including Jaromir Jagr and Dominik Hasek, call it home. Czechs seem to invest as much time and energy in hockey as Canadians. Therefore, it was probably appropriate that it was hockey that served as my first segue into Czech culture, and laid the foundations for a friendship between myself and my new Czech roommate.

Last Sunday, Canada and the Czech Republic faced off in the qualifying rounds of the World Championships. I got home late, by which point the Czechs had already scored a devastating three goals in the first period and it looked like all was lost for the Canucks.

Naturally, I attributed Canada's lagging performance to my absence, since hockey tends to bring out a superstitious side in even the most practical human beings. And, sure enough, when my roommate momentarily left the room, Canada scored its first goal. 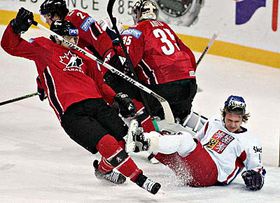 Photo: CTK The next two periods saw both of us shouting "No, no, no!" and "Ne, ne, ne!" whenever the opposite team broke away with the puck. During the breaks we discussed the popularity of hockey in our respective countries, and engaged in some playful trash-talking about each other's players.

I found it especially amusing because Tomas Kaberle, who plays defense for the Czechs, also plays for my hometown team, the Toronto Maple Leafs. Normally, I would be cheering for him but, at the moment, he was the enemy. If it felt odd for me to switch from my traditional team allegiance into nationalist mode, it must have been doubly bizarre for the players themselves, many of whom usually play against each other in the professional leagues.

By the end of the game, Canada had managed to pick up another three goals, but the Czechs won with a total of six. All in all, it was a good game and, I suppose, a bonding moment between myself and my roommate. Even if I can't speak Czech, I can always talk hockey. 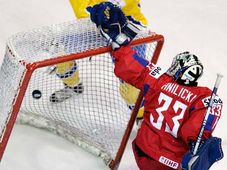 In Sports News: the Czech ice hockey team come second in the World Championships in Riga, a result being seen by many as a real achievement for… 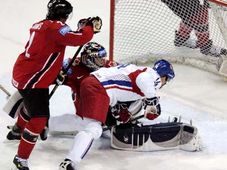 In Sports News: the Czech ice hockey team have secured a place in the last eight at the World Championships after an impressive win… 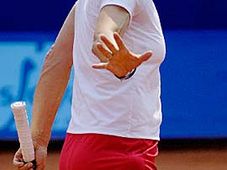 In Sports News: not the best of starts for the Czech Republic's ice hockey team at the World Championships in Riga; former Czech tennis…