Great city – but the centre is no longer for me

When I first lived here in the mid 1990s, many Czechs would tell me that they very rarely went into the centre of Prague. It’s full of foreigners, they would say, it’s too expensive, it just isn’t a place for us. C’mon, I would counter, it isn’t that bad – and you can’t just give up on the historical heart of your own city. 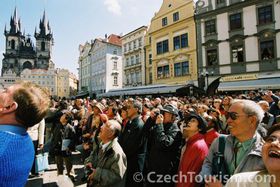 Photo: CzechTourism But now, two decades later, I must confess to having also developed something of an aversion to the downtown area – or at least to several parts of it. For instance, I simply dread Karlová St., which winds from Old Town Square to Charles Bridge and is particularly odious.

In fact, Karlová may be the worst of the worst, with its mainly Russian-owned, eye-searingly bright shops selling all kinds of tourist tat. This includes Matryoshka dolls, which any fool know have nothing whatever to do with Czech culture.

But that ulice is by no means alone. There are several streets in the vicinity, and on the other side of the river, chock-full of the kind of charmless restaurant that nobody ever visits twice, cafés no local would enter in a fit and bizarre commercial “museums”.

Frankly, it might be some kind of justice if whoever owns the idiotic one featuring “medieval torture instruments” was subject to their own (replica) contraptions.

The turning point in my own relationship with the city centre came when I worked for the best part of two years on Malé náměstí just off Old Town Square.

There was a back exit and I had a specific route to avoid the herds. But even still in the summer it was virtually impossible to get through even relatively quiet streets and alleys without wanting to shove a couple of members of a slow-moving tourist group out of the way.

But it’s not just the tourists that make much of the centre unappealing. Where I live means I frequently take the tram to and from either Národní třída or Masarykovo nádraží, two spots popular with drug addicts, winos, homeless people and – surely the latter’s natural heirs – beggar punk types.

My impression is that there are more street people now than there ever have been in several parts of the centre. For instance, there have been so many junkies stumbling around the top of Wenceslas Square in recent years that film students could easily shoot a short zombie movie there for free.

Another drawback of the centre is that there not many decent places to go for a drink. Most locals will know of a spot or two with quality pivo at a fair price, but such pubs are relatively few and far between in that part of the city.

My answer to all of this is to more or less only go downtown when it is really necessary and to avoid certain places religiously at the height of summer. And, of course, to enjoy the enormous amount that the rest of the city – which is after all most of the city – has to offer.