Clever. Just when you thought you’d seen everything, someone else comes up with a new neat trick. What am I talking about? How three Czech fans got on stage not long ago with the Irish rock group U2. In the front rows of a packed stadium in Berlin, they held up signs saying they knew how to play one of U2’s songs. And it worked: the trio got invited up. But the real trick wasn’t getting on stage, as unlikely as that was. That was the easy part! No, it was the performing that must have really been tough.

Not that you could tell. All three of the Czechs were calm, cool and self-assured under pressure, performing with legends in front of 80,000 – Bono singing. The worst time you could possibly ever mess up – that would have to be it!

But the trio, who play in a U2 tribute band at home didn’t of course - just the opposite. You can see for yourself on youtube if you visit.

For me, that is the Czech clip to top all Czech clips on the website so far. There haven’t been many, certainly, that made similar headlines. Maybe a few. Other Czech clips on the site from a few years back included police officers using their traffic paddles as ping pong rackets. Or a boy in a gym known as Šílený Ota (Crazy Ota) showing it is possible to bounce one’s body cartoon-like off a wall – and live! The latter inspired imitators from Canada to Brazil and to date more than 3 million people have viewed the clip. Not bad, I guess. But playing with a band like U2 - that beats it.

At a dinner party I was at recently the story of the Czech U2 guys came up along with the inevitable question: Who would you perform with, if you could?… Not any easy answer. One person said an R ‘n’ B singer I’d never heard of; another Kurt Cobain, if he were still around. Me? I couldn’t say. It would help if I at least had some musical talent: I don’t even sing at home (for fear I’d break our Ikea wineglasses). If you compared my singing to anyone it would be to Pierce Brosnan in Mamma Mia, except he sings like an angel. He’s also one of the best-looking men on the planet. No, I learned my lesson, about getting up on stage. I won’t even get up to stand beside a projected image, as in karaoke and I am a big Lost in Translation fan.

The truth is I did once, a big mistake. I thought I would belt my way through a Beatles song it just to get it over with. But wasn’t the recipe for success. There were around a dozen sad people in that sad bar whose looks were daggers. Daggers. I still wake up shivering sometimes remembering that “performance”.

Of course, the U2 guys, as real musicians, they obviously knew what they were doing: they could play in a bar just as well as they did for 80,000. They weren’t caught by surprise, even when Bono switched to Michael Jackson lyrics. They’d rehearsed for over a year, and when I spoke to the drummer, it was obvious he was a long-time fan. So, it was a calculated risk. At the same time you have to admire their bravado. This was U2. This wasn’t karaoke in some dive or playing ping pong with a cop or splatting against a wall somewhere in some sweaty gym. 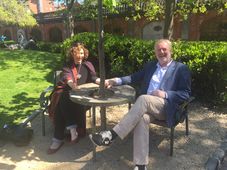 Havel was a hero who didn’t disappoint, says Art for Amnesty’s Bill Shipsey

This Wednesday a bust of Václav Havel will be unveiled at Ireland’s Dáil (Parliament), making him the first non-Irishman to be recognised… 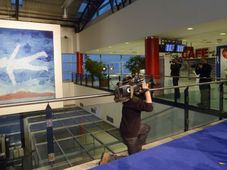 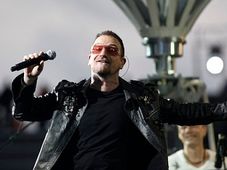 Imagine being invited - as a member of a stadium audience – to perform on stage with one of the world’s greatest bands. It could never…