During my recent holiday, I made a few day trips to castles and interesting places around Bohemia. Passing through towns and villages, I was pleased to see that slowly but surely they are losing the greyness they acquired during the communist era, buildings are being renovated and houses are getting new fresh coats of paint. 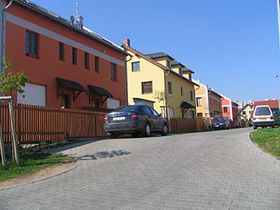 But there is also another trend which started in the mid-1990s and continues although many critical voices have been raised against it. It is the mushrooming of whole districts of small prefabricated houses around Prague and other cities and now increasingly further away into the country.

It is usually cheaper to buy a ready-made house in the country than renovate an old one or a flat in Prague. But what has been criticised about them and what is actually apparent when you see them is that they are built with little respect to the surrounding countryside and often, it seems to me, even to the people who are going to live in them.

I understand that people want to own their own place with a garden, out in the country where the air is cleaner. But so often you find those houses built along highways, so close to the traffic that the people must get all the fumes right in their windows. Also, the plots are so tiny and right next to each other that the inhabitants look straight into each others' windows, a situation resembling the cramped conditions in "panelaky" - the communist-era prefab high rise buildings, known as "rabbit hutches", these people have probably escaped from.

Also, these houses are mostly built on a green field, with no infrastructure, no shops, no schools and no sense of community, making their inhabitants totally car dependent. And - in my personal view - with only a few exceptions the unimaginative architecture is downright ugly, the pastel toned clones don't even make an effort to fit the countryside.

On the other hand, in nearby villages you can often see 18th or 19th century farmhouses with beautiful gables and large farmyards which are in a bad state of repair, often close to total dilapidation. It's a heartbreaking sight.

The newly built prefab villages came to be known in Czech as "Podnikatelovice", meaning something like "Small-Enterpreneursville" after the social group who first started to build them some ten years ago. There seems to be no social class as yet with enough money, courage and taste who would take care of those other, historic and valuable houses, built in harmony with the landscape, with respect to nature and community. But in another ten years it might be too late.