Never having been inside a courtroom or seen a real court case in action it was something of a shock to find myself watching the most notorious show trial of the communist era – the “H Trial” that sent democratic politician Milada Horáková and two others to the gallows in 1950.

Earlier this month Czech television featured a ten-part documentary of the trial using newly-discovered audio recordings that complement existing footage– ten 52-minute series of real-life, black and white footage from the courtroom for nine days in a row. Recorded by the communists the material was naturally incomplete and reeked of propaganda – whenever the defendant took the floor the cameras were switched off. But what was there was enough for one to get the real picture. Horáková, sitting straight and proud, in the first row flanked by secret police –and dozens of others, again separated by police – filling the rows behind her. I watched in horror as the accused gave their testimonies, some clearly still hoping for justice, trying to reason with the presiding judge: admitting that they had worked as spies in order to bring down the communist regime with which they could not agree, saying they had done what they thought was best for their country. Just two years after the communist take-over some of them clearly had little idea of the force they were up against. But gradually fear crept into the courtroom as their words were twisted against them by the Czech and Slovak prosecutors, the word treason reverberating around the packed courtroom over and over. It was clear they never stood a chance – their verdicts had been penciled in next to their names from the outset – and decided outside the courtroom by the communist elite. Some had been broken by the dreaded secret police before taking the stand and had clearly been primed what to say in return for a promise their lives would be spared. Everything they said went against what they had worked for and their eagerness to get it right was pitiful. Others held out and occasionally even gave as good as they got in answer to the question they were asked. However any show of rebellion was soon quelled –this was clearly a platform for their accusers – broadcast over the airwaves around the country. The last day of the trial was the worst –men and women from all walks of life, cowed and broken, admitting to treason and begging for their lives to be spared. Only some hung on to their dignity before the horrifying prospect of a death sentence. I wondered what it was like for Horáková to watch that. She sat there, twisting a white handkerchief in her hands and occasionally wiping her face with it, but otherwise seemingly calm and resigned to her fate. The verdict for her and three others was death by hanging - and viewers followed her footsteps to the gallows where a historian explained what had taken place. She was allowed to see her family one last time, but her final request to kiss her daughter goodbye was refused. So sure was the communist regime of the strength of its propaganda it broadcast this material over the airwaves to the nation –to the smallest towns and villages in the country. Miraculously, the footage was preserved in the country’s archives- containing far more than the communists realized – a harrowing testimony of the hardline 1950s. 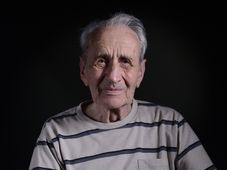 The long-awaited film about Milada Horáková, a democratic MP executed by the Communists in 1950 and perhaps the most powerful symbol…