Winston Churchill looks out of place in Prague square

I have a fault, if it can be described as such, and am normally too early for meetings and interviews. The problem is that I plan out trips and factor in a very large safety margin for public transport failures, problems finding the right building, and unforeseen events. It was thus that I arrived at the headquarters of the Bohemian and Moravian Trades Union Confederation building on Winston Churchill Square recently and had ample time to contemplate the bulky metal statue of the late British statesman and war hero. 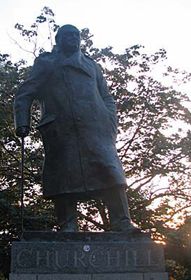 Photo: Kristýna Maková Winston Churchill’s statue appears to show him in his sunset years, clutching a walking stick with his other hand plunged deep in his pocket as if searching for a tram ticket during a check or for some loose change for some bothersome beggar. The expression is of grim resolution. Churchill, or rather his Czech statue, also stares at the trade union building, a massive pile that now has a bit of a forlorn feel with trade union membership numbers in permanent decline over the last 20 years. On the other side of the square are the more modern buildings of the country’s prestigious University of Economics. Across the park and down the hill are the odd assortment of small rather tatty bars, shops, and gambling joints that are a feature of this part of Žižkov.

I don’t know who thought up the idea of sticking the Churchill statue here - maybe it was the only spare square with available statue space at the time – but its context is pretty ironic. First of all, Churchill was disliked by the British trade unions. He was known for taking a hard line against them in various industrial conflicts before the First World War and masterminded the breaking of the General Strike in 1926. Even as a later war hero, Churchill was said to get a subdued welcome in the Welsh Valleys.

Secondly, in spite of being made Chancellor of the Exchequer, essentially minister of finance, Churchill had only the scrapings of understanding of that still raw discipline, economics, when he took up the post. Although he felt uneasy about it, he took the momentous decision for Britain to maintain a strong currency by going back on the gold standard although this is widely believed to have prolonged depression and unemployment. His lack of knowledge meant Churchill was a prisoner of the Bank of England and his officials and their orthodox economic views.

During the university summer break, the economically vague Churchill seemed in better company during my brief visit. Waiting outside the union building for my interview, I was soon spotted by one of a group of unkempt men. He approached across the park. “I have got these meal tickets but I can’t buy cigarettes with them. Can you change them for money,” he asked. He proffered the 50 crown tickets. I explained that I also had meal tickets and sometimes had trouble disposing of them, which is not quite true since they get me regular, if stogy fare, at the radio canteen.

Meal vouchers had the disadvantage that they were not as flexible as money I added. I glanced over at the University of Economics as if expecting some back up on the various types of currency in circulation and waited for the follow up bargaining. But no money to voucher exchange rate was not offered. “Have you got any cigarettes anyway,” the man asked in a heavy Slovak accent and drifted away when I again disappointed him. He returned to his mates in the park and began to roll some ready made smokes. Churchill looked down. If he could walk though I think he would turn his back on the union building and university, light up a cigar with the locals and head across the road into one of the bars for a solid session with the spirits. 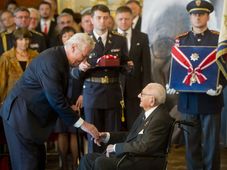 Czech President Miloš Zeman bestowed state decorations on more than 30 personalities on Tuesday, on the occasion of Czechoslovakia… 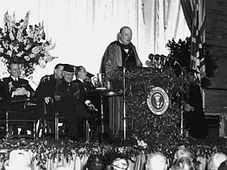 Into the Cold - 60 years since Churchill's Iron Curtain speech

The Cold War held the political world on edge until its end in 1991, when the Soviet Union fell. This significant rift in international… 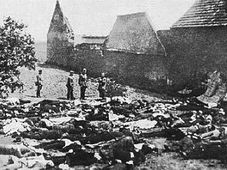