The European Banger Rally will head for Prague in September! The President's office reports car theft, and who will build the biggest VATRA on bonfire night? Find out more in Magazine with Daniela Lazarova.

Czechs can look forward to another prestigious international event - it appears that Prague has had the honour of being selected as the final destination of this year's European Banger Rally - to quote the organizers: piloting old bits of rubbish to an Eastern Europe scrap yard. Cars participating in Czechwrecks must cost under 100 pounds -or 4,000 crowns - but luckily for us the organizers have emphasized the importance of breaks and clutches. The Calais to Prague rally which is to take place at the beginning of September is 1500 miles long, to be covered in four days. And the winner gets one thousand pounds in cash - that is if they can find can find their way here. According to the organizers the rally will take participants through six countries: France, Switzerland, Italy, Germany, Austria and, somewhat surprisingly, Czechoslovakia. Sorry to mess with your plans guys but we know for certain that the latter ceased to exist in 1993. Good luck anyway.

Czech and German scouts are enjoying their annual get together this weekend. The event has a ten year tradition and its aim is to bring together scouts of all ages from the two neighbouring states. It starts in the West Bohemian town of Pilsen with an open air music festival, and the main event is a two day bicycle ride from Plzen to Regensburg in Bavaria where more entertainment awaits the participants. This year over 100 people signed up for it, aged four to sixty. The four year old only covered part of the 200 kilometre trail by bike, but everyone else from the age of seven up is determined to reach Regensburg under their own steam. On Saturday evening they are breaking their journey in Furth im Wald.

Car theft is still a big problem in the Czech Republic and not even President Klaus is spared. This week one of his limousines was stolen from right under his driver's nose. The driver had just hopped out to buy a paper, leaving the keys inside and he came out of the store in time to see the limo disappear in a cloud of dust. The police were out in force searching for the President's lost car but by the time they found it there was only the torso left - it had been dismantled for spare parts. Well, at least the President need not request the police chief for a report on the crime scene. He can be certain thieves are working as efficiently as ever...

The end of April and the beginning of May brings two fun events for young people - bonfire night and the burning of witches on the last day of April and Sweethearts Day on May 1st - the Czech version of Valentine's Day. On bonfire night young men jump over the bonfire to show their prowess, but building the bonfire is in itself a form of art. Two Czech villages are currently competing for supremacy over who will build the biggest vatra - a pagoda built of logs which forms the bonfire. Revnice and Mnichovice near Prague are the two main rivals. In 2003 Revnice set the Czech record with a pagoda measuring 11 metres 60 centimetres. They guarded their technique jealously because when you reach a height of 9 metres it is not easy to keep the structure stable. 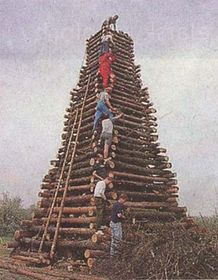 Photo: MU Revnice However despite the secrecy surrounding their construction skills, the village of Mnichovice beat them to it the following year erecting a pagoda which was an impressive 14 metres and 20 centimetres. In 2005 the two villages agreed on a ceasefire settling for regular sized bonfires. But this year they are vying for supremacy once again -aiming for a 14 and a half metre pagoda in order to break the Czech record. The whole procedure takes from three to four days - and both towns have admitted they will send out spies to find out how work is proceeding in the enemy camp. Whoever wins - it will be an impressive blaze - and no need to say that firemen and medics will be on standby on Bonfire night. 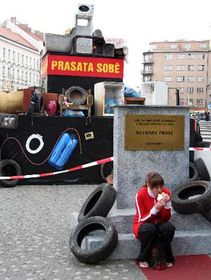 Photo: CTK There's been a lot in the media recently about illegal dumps of German waste smuggled into the Czech Republic - which is making people living in the border areas very angry. Let them keep their waste, we have plenty of our own, they say. And, they're right. Illegal waste dumps are still a big problem in this country. So much so that the mayor of Prague 5 decided this week that people need shock therapy! In order to show the public how serious the problem is he deposited a huge dump of illegal waste on the district's main square right outside the Andel metro station. The three and a half tons of waste dumped on the main square represents the amount to waste that Prague five inhabitants illegally dispose of every day of the year. The waste dump is to remain there until the end of the month and the mayor hopes that passers-by will get the message. There is just one big risk that the mayor may have underestimated - people may start adding more waste to it.

Paroubek's bakery, photo: CTK With just over a month to go to general elections politicians are bending over backwards to secure voter support. The Freedom Union, one of the smaller governing parties, has launched an anarchist campaign, complaining about the arrogance of power and filling the streets of Prague with leaflets that read " It's legal to smoke" and " It's legal to love". The party says it supports the legalization of soft drugs, euthanasia and gay marriages. The main coalition party of Social Democrats, dismissed their smaller coalition partner as "the mouse that roared" and focused attention on its main rival -the opposition Civic Democrats. The Social Democrat Prime Minister himself handed out loaves of bread with the party's name stamped on them to people passing through the Masaryk railway station. The message was - the Social Democrats will put bread on your table - unlike the Civic Democrats who will bring you nothing but poverty. 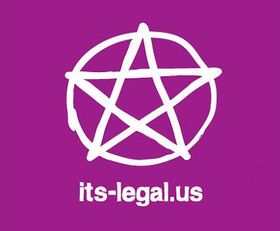 The Civic Democrats will take from the poor to give to the rich, Mr. Paroubek warned presenting the ladies with roses and the kids with teddy bears. Meanwhile the Civic Democrats have based their counter-attack on the possibility of the communists coming back to power - with the help of the Social Democrats. They intend to make an impact with election slots which show excerpts from the popular German comedy Goodbye, Lenin! The film is about a family's desperate attempt to protect their fragile mother from a fatal shock after a long coma - they must keep her from learning that her beloved nation of East Germany as she knew it has disappeared. Unfortunately for the Civic Democrats the filmmakers and distributors are not happy about their intention and are trying to prevent the film being used for political purposes. Whatever happens, Czech politicians are sure to provide more entertainment in the coming weeks.