Why are beer drinking competitions a thing of the past? The police in Opava are patrolling the town on in-line skates, and the litter bin that burps - the latest pub craze in the Czech Republic. Find out more in Magazine with Daniela Lazarova.

Summer beer festivals are very popular in this country. Thousands of people turn up to sample different brews, enjoy the live bands and whatever attractions breweries have planned for the day. One thing has now changed. The popular beer drinking contests - in which participants compete to see who can down the most beer in the shortest possible time - are a thing of the past. After the Czech inspection office slammed huge fines on two breweries for allegedly violating the law on advertising - which stipulates that an ad must not encourage people to drink in excess - breweries have agreed to forego this particular form of public entertainment in the future. Many have turned to rolling the barrel competitions instead.

A British-made litter bin that comes in the form of a pig that slurps, grunts and even burps when you throw something inside has become a hit with many Czech pub owners. "It's a tactful reminder of how not to eat your lunch" one of them says. Clearly none of his regulars take it personally - they all love the noisy bin and in many pubs this "local mascot" even has a name.

Richard Jaronek from the town of Vizovice specializes in underwater photography. And the desire to get the very best picture possible has led him to associate far more closely with sharks than is healthy. Jaronek is not one to film sharks from a cage. He insists that in order to understand them you need to interact with them freely. He plays with them close up, touching them occasionally to see how far they will let him go. He has been repeatedly wounded in these direct confrontations but he is now so hooked on the adrenalin there's no way he could stop taking risks underwater. Challenged that this could one day cost him his life, Jaronek says "if that happens, then so be it". He believes that sharks are wonderful intelligent creatures. "They've been around for 30 million years - developing" he insists. "They are not merciless killers with zero IQ. As for me I have a deal with Neptune, god of the seas." Well, let's hope the sharks are aware of that.

Sandcastles may not be lasting but the sand pictures that Lada Stehnova and her family make certainly are. It's a form of art that's unique in Europe and people who see the pictures find it hard to believe that one can create something so beautiful from mere grains of sand. Lada says that it takes hours of sieving to get an ideal texture, then mixing colours and applying the sand to the paper to create just the forms she wants. The sand is held by glue but the technique with which Lada creates the different patterns and figures is a family secret.

Police officers in Opava are now moving around the town on in-line skates. This is part of an effort to make them more visible in the streets and at the same time to help them move from place to place faster. The officers themselves are quite pleased with the innovation. "In the heat of summer it is certainly better than being stuck in a car" says officer Petr Mucha. "It took us a while to get the hang of things - and there were a couple of nasty falls - but now we are totally in control," Mucha adds, admitting that people did snigger at first at the sight of policemen on in-lines, cracking jokes about the price of petrol. Now, the locals have got used to the sight and the officers get better on their in-lines with every passing day. And since they do a lot of desk work, it also helps them stay in top form.

Sixty year old Ondrej Gura is the first gardener in the Czech Republic to grow an orange cauliflower. He's into experimenting and often tries exotic breeds from around the world. So far he's grown green and purple cauliflowers. The most recent - orange ones - are from seeds acquired in Japan. So you can imagine that having lunch at his place is quite an experience. So far, he says, the purple variety tastes best. 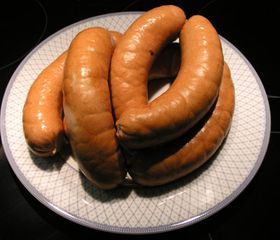 Salami and sausage lovers are worried. The agriculture ministry is planning to revoke the validity of a directive stipulating how much meat sausages and salamis must contain. Other EU countries do not have such norms and the ministry feels that Czech producers are hard done by in having to compete with cheaper EU imports which contain less meat and more flour or soy meat. Czech producers have welcomed the decision saying that they will be happy to maintain a high meat content in their products if consumers are willing to pay the price.

Christmas if still far away but in the town of Trest woodcarvers from the Czech Republic, Slovakia and Romania have been carving figures for the town's nativity scene. The locals started making it six years ago but not many people nowadays are good at carving figures out of wood, making it a slow and painstaking process. So the local woodcarvers invited their friends from abroad over for a summer work session on the nativity scene and with their help the number of figures has now reached 190. "We don't know how big it is going to be in the end"- Marie Rohackova one of the local carvers told journalists. "We'll just see where our work takes us". The visiting woodcarvers are due to return next year - and have insisted on making it an annual -rather than bi-annual event. They come back every year with fresh ideas and a multi-cultural input so, once it is finished, the Trest nativity scene will certainly be something special.