Czechs can now download music legally - but what are the chances of people paying for music when they can get it for free? The price of losing a bet - Czech politicians know all about it. And, the Czech invention that preceded the plastic bag. Find out more in Magazine with Daniela Lazarova.

The Senate and local elections have had some belated repercussions - several politicians made very unwise bets about the outcome and have now had to pay up. The deputy chairman of the Social Democratic Party Zdenek Skromach bet his moustache that the Social Democrats would not win the mayor's seat in Brno and - lost the bet. The Social Democrat mayor, Roman Onderka, himself set about shaving it off - while photographers and TV crews had a field day. After 33 years with a moustache Mr. Skromach clearly had a problem relating to his face in the mirror. Such outrageous bets are not unusual among Czech politicians- Communist Party deputy Milena Vostra also lost a bet on the elections and had to delivery the post all day to people in her constituency. 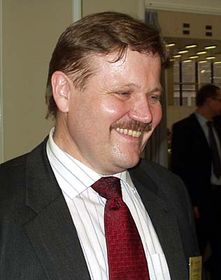 Zdenek Skromach The former transport minister Milan Simonovsky has laid a bet that if the Prague-to-Ostrava highway is not finished by 2008 he would cover the distance on foot. It's 80 kilometres and Mr. Simonovsky says he trains daily - walking and swimming to keep fit. Possibly the worst bet of all was that made a few years ago by the head of the Pensioner's Party Eduard Kremlicka who said that if his party failed to cross the 5 percent margin needed to win seats in the lower house he would eat a bug. His party failed and Mr. Kremlicka was forced to chew on a big black bug as TV cameras rolled. One would have thought that after that politicians would have been more careful. 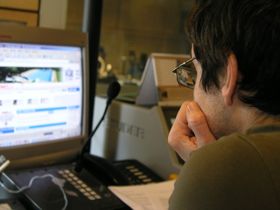 As of this week Czechs can download music legally- for a certain fee - at two new internet servers. But what are the chances of people paying for music when they can get it for free? An opinion poll conducted at several Prague schools shows that teenagers find the idea laughable. Downloading music and burning CDs is something 95 percent of teenagers do on a daily basis- and they see no reason at all why they should pay for it -or feel guilty about not paying. "Everyone does it - so why shouldn't we?" is the most frequent argument used. Another is that they find CDs to be generally overpriced. Parliament has now tightened the country's anti-piracy laws but that should be more effective with regard to firms than individuals. As one teenager put it - how will they find out? Petr Bartak of the company which set up one of the internet servers says he is aware of the fact that they are not likely to attract the masses. "We expect to be successful in marginal genres, but much will depend on accessibility and easy payment" he said. The portal will cooperate with all the big music agencies as well as small companies. It presently offers over 200,000 songs and expects to have double that number in the near future.

Czechs are well known fans of plastic bags- they are practical, light and fit into your pocket when they are not needed. But you may not know that what preceded the plastic bag was a Czech invention - the so-called "net-bag" or "string-bag". The net bag performed the very same function for decades before the plastic bag appeared on the market. It first made its appearance in the town of Zdar nad Sazavou in the late 1920s where a local businessman Vavrin Krcil had a good business going making nets for elaborate hairdo's. One day he decided to add two handles - and the net-bag was created. For close to half a century people used the net-bag on a daily basis - every family had several of them and they were used mainly for shopping - but also for transporting whatever was needed - vegetables from the garden or a live carp from the market at Xmas time. It was the symbol of the communist days, but it also spread to other countries in Europe, including Western Europe. When plastic bags appeared the production of net-bags stopped and Czechs have never looked back. Jan Fencl and Milos Zeman, photo: CTK They jokingly call themselves "the club of government veterans" and if anyone is enjoying the twists and turns of the country's political crisis -they are. The ministers of the Social Democrat government led by Milos Zeman which was in office from 1998 to 2002 have annual get-togethers in the country home of the former agriculture minister Jan Fencl. To quote ex-prime minister Milos Zeman they meet to remember the good old days and discuss how their successors are faring over Becherovka, beer, roast pork and tripe soup. "We are talking about the good old days when it took three weeks to form a government" the former prime minister Milos Zeman told reporters at their meeting last week. "This is a meeting of ministers of the first and so far only successful government to rule since 1989- the only government which government for a full term and left untainted by scandal" Mr. Fencl added. The mood was upbeat and the only faces missing around the table were those of Vladimir Spidla and Stanislav Gross both of whom later went on to become prime ministers and who fell out of favor with the former party boss Milos Zeman.

The number of British tourists to Prague has doubled to more than 650,000 since 2002 and not all of them are giving their home country a good name in the Czech Republic. Stag parties which head for Prague on low cost airlines looking for a good time are often drunk and rowdy and an easy target for pick-pockets. Tired of dealing with complaints and being woken up in the middle of the night by disoriented tourists who have forgotten what hotel they are staying in, the British embassy has now launched a campaign appealing for more common sense and less excess. "Come and have fun but be responsible" is the gist of the message which will appear on billboards and beer mats around Prague. The initiative is part of a wider campaign targeting 26 countries where her majesty's citizens have a history of being accident prone or a reputation as boorish tourists.