The Czech Republic boasts the only stone guitar in the world. Czech fashion designers fight for a place in the sun. And -why have Czechs sent a barrel of their best beer to Brussels? Find out more in Magazine with Daniela Lazarova.

It may be mid-November but here in central Europe the weather remains unseasonably warm. On some days temperatures hover around 14 degrees Celsius - and it is nothing unusual to see roses in bloom. Many trees have started budding, there are mushrooms to be found in the country's forests and most amazing of all - journalists who visited Ostrava, in the eastern part of the country, found a garden where late strawberries were still ripening in a strawberry patch. Last year at this time the country was covered with snow and skiers filled the country's tourist resorts. This year November has already broken a temperature record from 1920 and meteorologists say that the rest of the month will be mild as well. Colder weather is not expected until around December 10th.

There are some strongman feats that it is advisable not to try - and that doctors don't like seeing. Czech strongman Jan Knotek specializes in records that are only for people with strong stomachs. Last week he pulled a car - an Alfa Romeo - for close to three meters by his eyelids! "The hardest part was inventing a flexible spring mechanism that would let my eyelids take the weight," Knotek said. He has several bizarre records to his name - including pushing a car with the help of a pitchfork the prongs of which rested on his chest.

Imagine building a model railway landscape that would take 30 years to complete. Train enthusiasts in the west Bohemian town of Plzen set themselves this task in the grey and dreary days of the communist "normalization" period - the notorious 1970s when party hardliners went about stifling any opposition to the regime and erasing any reminders of the Prague Spring reform movement. It was a time when most people retreated into themselves - turned their attention to their families and put their energy into their country cottage or their hobbies.

Building a model railway - the biggest in Czechoslovakia - seemed like a great idea. What the railway enthusiasts did not know was that by the time it was finished Czechoslovakia would no longer exist and they would be living in a free country. The model is reminiscent of the 1970s. It covers an area of 50 square meters and has 750 meters of tracks, several railway stations, tunnels, bridges, towns and landscape. There are 45 trains altogether, which need to be operated by six people simultaneously. In other words - it's a treat.

An exhibition of tea and coffee cups dating back to the beginning of the 17th century is currently on show at a gallery in Brno. There are over 400 pieces on display - stone cups, tin cups, silver cups and china - loaned from various castles and chateaux in the region. The oldest date back to the early 17th century and the nobility used them mainly for hot chocolate - a drink that the Spaniards brought to the Czech lands from America. But, by all accounts, it was not very popular, since back then it was prepared in the American Indian fashion with chili and without sugar. It was not until the 18th century that hot chocolate was replaced by tea and coffee. Tea was then considered far more precious than coffee. It was far more expensive and in many households it was consumed as medicine. This is also documented by the fact that in the 18th century tea cups were much smaller than coffee cups. And in Oriental fashion - they had no "ears". 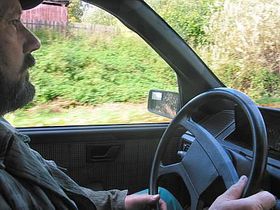 The Czech traffic police have spent a million crowns on a "Hands On" campaign aimed at encouraging Czech drivers to keep their hands on the steering wheel at all times. More than twenty percent of all accidents on the road are allegedly caused by the fact the driver was using a cell phone, eating or tuning the radio at just the moment when a rapid reaction could have prevented a crash. The Hands on Campaign will appear on radio spots, billboards and DVD films.

The Czech Republic boasts the only stone guitar in the world. This unique instrument was chiseled by stone cutter Jan Rericha from a precious type of marble found in Guatemala which is said to be 250 million years old. It took him three months to make and the guitar is fully functional since marble is said to have resonance qualities similar to wood. The guitar had its premiere this week - at Pardubice chateaux where one of the Czech Republic's best guitar players Stepan Rak gave a concert of classical music. He was delighted with the instrument but said he wouldn't care to play it on a regular basis. "It's a hefty task given that this guitar is five times heavier than a wooden one," he said. 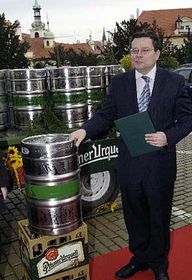 Foreign Minister Alexandr Vondra and the barrel of the best Pilsner beer, photo: CTK Pilsner beer is considered to be one of the Czech Republic's best ambassadors and - the Czech Republic plans to send a big barrel of the best Pilsner beer to Brussels to show its opposition to a proposed rise in EU alcohol taxes. Hopefully officials in Brussels will get the message. In any case Czech Finance Minister Vlastimil Tlusty - who will head to Brussels alongside the barrel for a meeting of EU finance ministers - has already said that Prague is prepared to veto the proposed tax rise. Since every country is said to be defending its national beverage it will be interesting to see what the others will bring - and how the meeting of finance ministers goes!

A new generation of Czech fashion designers is fighting for a place in the sun - but they say it is an uphill struggle. The twice yearly "Prague Fashion Week" now attracts plenty of potential clients whose purchasing power has climbed in the last decade, but designers say that only a small elite is willing to spend larger sums of money on clothes - and often the well-off turn their attention to established Western designers. The majority of Czech women - not to mention men - are still pretty conservative in how they dress and very pragmatic, a trend that designers ascribe to the "uniform" communist era. While two out of three Czechs claim they want to wear something original, in reality few of them head for fashion boutiques, preferring to spend their money on sports clothes in one of the many department stores. As Czech designer Daniela Flejsarova says - "A Parisian woman who wants to give herself a treat will buy a new coat - a Czech woman will buy a new washing machine." Maybe Czech women should start putting themselves first for a change. 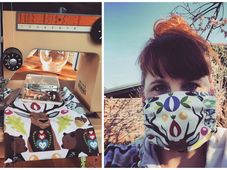