Gyrating saints on Wenceslas Square? Controversy over a New Year's party. A Czech strongman lifts a car complete with driver! And -is it spring or winter? In central Europe it's hard to tell. Find out more in Magazine with Daniela Lazarova. 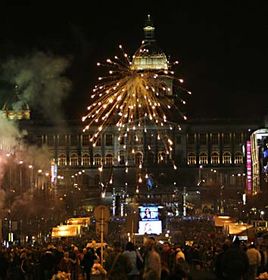 Photo: CTK 2007 started off with a bang - and gyrating saints on Wenceslas Square. Well, to be precise the saints - including St. Wenceslas on his equestrian statue - were only gyrating in a tv ad which private NV Nova used to promote its New Years party at the top end of Wenceslas Square. This is the first time ever that a New Years party has been held there and opinions are divided on the matter. Some people say it's a great idea because what better place to celebrate than in the very heart of Prague. But others were shocked that a wild New Years party should have taken place on what they feel to be "scared ground" - around the statue of the nation's patron saint where people gathered in times of crisis - the Nazi occupation, the Soviet led invasion in 1968 and - during the Velvet Revolution that toppled communism. "It's an insult to everything this nation holds sacred" critics say and a group of people have signed a petition demanding that TV Nova be sanctioned. However the party's advocates have equally strong arguments - for the first time this year the top end of Wenceslas square was a safe place to be on New Years Eve - not drunks, not broken champagne bottles and no fireworks gone out of control. And, as they see it, Wenceslas Square should unite people in times of joy as well as sorrow.

Photo: CTK Last year was exceptionally warm here in central Europe and as Czechs entered the New Year it seemed obvious that this year winter had simply forgotten to come. Twelve degree highs in January are something that few people recall and meteorologists have forecast mild weather for the duration of the month at least. While many Czechs are enjoying the mild winter others are put out. The so-called "otuzilci" hardy men and women who like to take a dip in Czech rivers in sub degree temperatures were clearly disappointed this year when they waded into the Vltava where the water temperature was 6.3 degrees Celsius. On the other hand people who enjoy mushroom-picking - a popular summer pastime - are still able to find some great specimen in the country's forests. 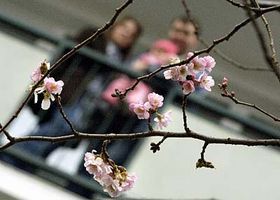 Photo: CTK Spring flowers are blooming and some migratory birds seem to have forgotten to leave for a warmer climate. You can still hear blackbirds, larks and wagtails chirping and trilling away and the crows and wild geese which usually arrive from the north and east are scarce this year. And if anyone needed more proof that the weather has gone haywire in this part of the world - it was a report broadcast over the Christmas holidays - a proud duck had brought out a family of newly-hatched ducklings. This time last year firemen were saving swans trapped in the frozen Vltava river!

The Scouts association in the Czech Republic is preparing "the birthday party of the century" this year to mark the centenary of the Scout movement world-wide. It wants to use of the occasion to boost flagging membership in the Czech Republic where the number of scouts is slowly dwindling after a temporary revival in the 1990s. Today the Czech Scouts Association has 46,000 members of all ages. Czech Scouts will celebrate their birthday on April 24th - on St. Jiri - their patron saint's name day, but special events have been planned throughout the year under the motto "Ready for Big Things". In order to attract youngsters Czech scout leaders have organized an exhibition documenting the membership of famous Czechs in the Scout movement, among them the former Czech president Vaclav Havel and Czech-born film director Milos Forman. 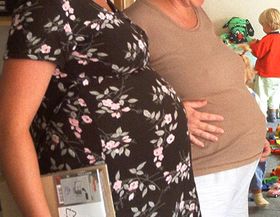 Politicians around the world are very much alike - and so "read my lips" jokes are as popular here as well as anywhere else. However some politicians are different. At her very first press conference the newly elected mayor of Karlovy Vary - thirty two year old Veronika Vlkova - appealed to the locals to make babies! The reason is simple. Apart from the fact that it is fun the town's inhabitants have been decreasing in recent years. If they should drop below 50.000 Karlovy Vary stands to lose 20 million crowns in government subsidies. It is not clear whether her message made an impact - but the town hall has just announced that the mayor is pregnant!

The Jihlava Town Hall has a very special architectural feature - a latrine from the Middle Ages. It is in the town hall's press office and employees are proud to show it off to visitors. The latrine is part of the building - basically a stone alcove that used to be curtained off, to which past mayors would retreat in the old days. "It is fully functional - although, of course, no one uses it today" the press spokesman says. You can see this type of latrine in some of the country's old castles - but very few buildings still have one - and for the most part they have been transformed to serve a decorative purpose.

You may not have heard of it - but the Spider Lawnmower is a radio-controlled garden robot with a "Made in the Czech Republic" label. Its inventor is 42 year old machine engineer Lubomir Dvorak from the town of Havlickuv Brod. It took two years for his idea to materialize and today the Spider Lawnmower is cutting grass in difficult terrain in the Austrian Alps, in Canada, the United States and Japan. The Spider is designed for extreme hillside lawns and is easy to maneuver around trees and shrubs. Even stony ground is not a problem. And it's the only way to mow the lawn while enjoying a cold drink in your hammock. However, although its inventor is Czech, most Czechs are still waiting to get it. At the price of half a million crowns -or 15.500 euros -it is still a toy for the very rich.

The best-known Czech strongman thirty two year old Rene Richter has set another incredible record. He lifted a Skoda car - complete with driver - on his back, thereby taking a weight of 1.290 kilograms. The event was witnessed and recorded by representatives of the Czech Book of Records and the recording will now be sent to the Guinness Book of Records headquarters in London. If it is officially acknowledged it will be Richter's forty first world record! The number of induced abortions in the Czech Republic has dropped by nearly 20 percent over the past five years. While in 2014, the…