In Magazine: Czech students make a christening gift for Britain’s Prince George, preparations are underway for the festival of young wine Burčákfest, how low down on the happiness index are the Czechs and, if you are divorcing, keep an eye on your teeth. 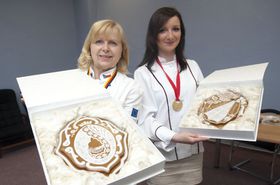 Jaroslava Londová and Marie Kolínková, photo: CTK The Vsetín School for cooks and pastry chefs has been working hard on a christening gift for Britain’s Prince George. The school’s students have baked and hand decorated two gingerbread medallions. Both are exclusively hand-made and decorated with an intricate pattern resembling fine lace. One has the motif of a cradle and a king’s crown the other bears the prince’s name. According to pastry chef and teacher Marie Kolinkova, who supervised the work, the gingerbread medallions were made out of 8 kg of dough and hand-decorated for over a month before they were deemed perfect. The gift was reportedly sent to the British royal family this week. 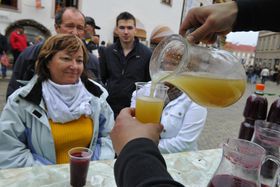 Photo: CTK The festival of young wine – Burčákfest – in Znojmo – scheduled for next weekend traditionally attracts visitors from far and wide. In addition to open air concerts and a great atmosphere it offers the entertaining spectacle of young girls pressing grapes with their bare feet in huge vats. The girls’ names then appear on the wine label. This year’s festival will offer four kinds of burčák which will naturally also be on sale in bottled form for people to take away. 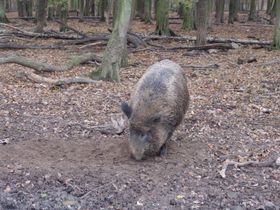 Photo: Miloš Turek A project monitoring the behavior of wild boar in the Šumava mountains has made headlines both here in the Czech Republic and in neighbouring Austria. While boars usually do not wonder far from their given location, one of the five animals monitored undertook an impressive foreign tour, crossing the border into neighbouring Germany for a two week stay before heading for the Austrian town of Neufelden where he also spent some time before heading for his home turf. The boar has been named Mirek and has become a local celebrity. 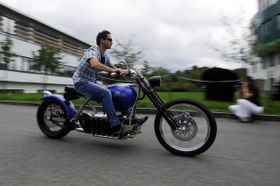 Photo: CTK A team of students at Plzen University have constructed an electro-motorcycle resembling the chopper. The prototype is 2,5 meters long, weighs 200 kg and can run at a maximum speed of 130km per hour. On a full battery it can run for two hours. It was presented to the public last weekend at the Days of Science and Technology in Plzen and evoked considerable interest. The school is now looking for a potential producer. 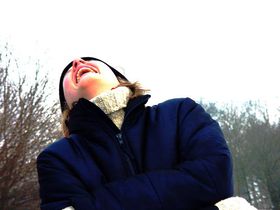 Photo: Uschi Hering, stock.XCHNG Many foreigners who live in this country say that Czechs don’t smile enough and judging by their place on the happiness index they may just be right. Czech are not the happiest people in the world –by their own perception -they are 39th down the ladder. Among the main factors influencing people’s perception of happiness are the country’s GDP, life-expectancy, the freedom to make their own decisions and family ties. Although the richest country’s also boast the happiest people, the results show that income is not as important a factor for one’s feeling of happiness as is personal freedom and a support network of family and friends. Photo: artur84, Free Digital Photos People who are divorcing are not usually on the best of terms, and a Czech couple from Konstantinovy Lázne are a case in point. In the wake of a bad argument the wife waited for her fifty-four-year-old husband to remove his false teeth before going to bed and promptly threw them in the garbage can. By the time the poor man realized that his teeth were gone, the garbage truck had come and gone and his wife was triumphant. Now the issue is being dealt with by the police and the couple’s relations have dropped below freezing point. 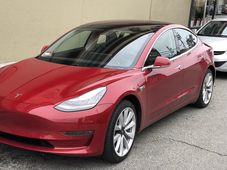