And it's the first edition of Mailbox in the New Year and those of you who celebrate Christmas and the New Year, Radio Prague hopes you've had a good holiday, are well rested, and ready to tune in our frequency every day. Thanks again for all the season's greetings you've sent us. They are all truly appreciated. But let's move on with a question from Mary Tracy who currently lives in Singapore and is considering moving to Prague for a few years. She writes:

"Thank you very much for keeping us up to date with current affairs. I have always had a special interest in the Czech Republic ever since I visited your country a few years ago. Now, all I need to get a good idea of life in Central Europe is basic figures like the average wage, the inflation rate, and the unemployment rate. I know you have mentioned these in past reports but it would help me and other listeners too if you gave us a New Year's round up."

Well, it's too early to give you a New Year's roundup of 2003 because the figures are yet to be released by the Czech Statistics Office. But what we can do is give you the latest figures. The unemployment rate stood at 9.9 percent in November and new statistics will come out on January 9th. The GDP (gross domestic product) grew by 3.4 percent in the third quarter, which was much more than expected. We'll have to be patient until March 10th to get the figures for the fourth quarter. And inflation grew by 0.4 percent in November. We'll get the end of the year numbers on January 9th. Last year, it stood at 1.8percent and is expected to be lower this year. And finally, the average wage in the third quarter stood at 16,321 Czech crowns. The Statistics Office is expected to release the figures for the fourth quarter on March 10th.

Moving on to a question from Thomas French from the UK:

"I heard that the man who has been threatening the nation by placing bombs around the country has been caught. Could you tell us more about him and his motive? Is it true that he is a pensioner?"

Yes, it is true that the 68-year-old man who police believe to be responsible for bomb threats is a pensioner from Prague. However, it is not yet clear what his motive was, especially since the places he threatened varied greatly, ranging from a hospital, to train tracks, and monuments. It appears that his motive was to destroy and not blackmail the state, with the exception of one case in March where he demanded a ransom of one million Euros. Police say he is responsible for twelve cases in the last five years where a bomb either exploded or was found before it was able to go off and suspect he is responsible for six more. National Museum Our time for Mailbox is almost up. We have a last question from a listener in Nigeria called Brendon Brown who wants to know:

"What permanent exhibitions can be found in the main building of the National Museum at the top of Wenceslas Square? Are they worth visiting by someone who will be in Prague for just one week?"

Well, that's a difficult question to answer, especially because Prague has so many museums and travelling exhibitions that are worth seeing and a trip to all of the permanent exhibitions at the National Museum would take up a whole day. The main building houses an exhibition on the prehistory of Bohemia, Moravia and Slovakia, the mineralogical and petrologic collections, a collection on palaeontology, the zoological collections, and an exhibition on anthropology. If you plan to visit Prague again some time in the future, I suggest you leave the trip to the permanent exhibitions to another time. But there are many smaller museums that are part of the National Museum but in other locations around Prague that you should visit - such as the Bedrich Smetana or Antonin Dvorak Muesums. 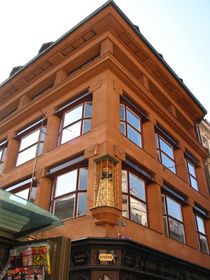 House of the Black Madonna And we've finally come to the part of Mailbox that all of you have been waiting for. Our listeners' competition. Let me thank all of you who have sent us their replies to the question: "What building close to the Old Town Square is connected with cubism?". The correct answer is The House of the Black Madonna. I must say that out of the numerous replies we got, only three were incorrect. But I won't keep you in suspense any longer. The listener we pulled out of our hat is: Ms Ryoko Yazawa from Tokyo, Japan.

Congratulations! You've won one of the latest CDs of Czech music called the Jewels of Old Bohemian Music performed by the renowned Tallich Chamber Orchestra. We hope you'll enjoy it.

Just a quick reminder that this year has been designated as the Year of Czech Music and we have a new series of QSL cards featuring Czech musicians and music organisations, so keep the reception reports coming in. And Czech Music is what this year's monthly competitions will focus on. Your task for the month of January is: "name the distinguished Czech composer who lived from 1874 to 1935, whose 130th anniversary of his birth is being celebrated this month." You have until the end of the month to get your answers to the Radio Prague English Section, 120 99 Prague 2, the Czech Republic or by e-mail to english@radio.cz.