In today’s Mailbox, you will find out who the mystery lady from our April competition was. We will also announce the names of four of Radio Prague’s listeners who were drawn out of the hat and will receive small prizes from us for their correct answers. And of course, there is a brand new quiz question for you. Listeners quoted: Prasanta Kumar Padmapati, Christine Takaguchi-Coates, Jana Vaculik, Ian Morrison, Mark Guy, Panha Pen, Deepa Chakraborty, Colin Law, Partha Sarathi Goswami, Henrik Klemetz, David Eldridge, Christopher Roberts, Charles Konecny. 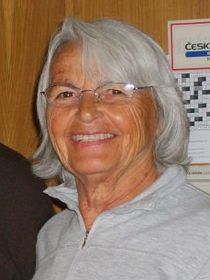 Olga Fikotová, photo: Petr Jindra Welcome to the first edition of Mailbox in May. Today we will find out who the mystery lady from our April competition was and, as usual, we will quote from your answers. Finally, we will announce the names of four of Radio Prague’s listeners who were drawn out of the hat and will receive small prizes from us for their correct answers. If you listened to our special programme on May 1, you will know the answer already. Prasanta Kumar Padmapati from India was among the first to respond:

“Olga Fikotová is a Czechoslovakian and later American athlete who competed mainly in the discus. She competed for Czechoslovakia in the 1956 Summer Olympics held in Melbourne, Australia in the discus where she won the gold medal. During the games she fell in love with the American athlete Harold Connolly. The couple married after the Olympics but divorced in 1973. Olga Connolly took part in every Olympics till 1972 competing for the United States but without winning any more medals.”

“Few people paid attention to twice national discus champion Fikotová ahead of the Games. All eyes were on four-time gold medal distance runner Emil Zátopek! However, Fikotová captured gold over a pair of USSR women, and set an Olympic record of 53.7 metres, an especially sweet victory for the citizens of a Soviet satellite state. Fikotová and Connolly had met at previous international competitions, but their love took root in Melbourne. However, the Cold War was at its height, and communist officials tried to dissuade Fikotová from the marriage, even calling her a traitor.”

Ian Morrison lives in Beijing where the Olympic Games will kick off in less than a hundred days:

“Given the political atmosphere of the time, the fact that she even had a relationship with a US citizen shows that Olga Fikotová was a very brave lady indeed.”

“April's mystery lady is Olga Fikotová. By all accounts, she was certainly the Golden Girl and something of ‘a thorn in the side’ of the dreaded communists.”

“Actually, her love and marriage to the American gold winning hammer thrower, Harold Connolly, is more than a good clue to the competition. It was a wonderful and famous love story which caught international headlines after their sport victory records.”

Deepa Chakraborty from India had this to say:

“Through her marriage alliance with Harold Connolly, the famous US hammer thrower, she is credited with bringing into the world some remarkable sportspersons in the form of her children – Marek (boxer), James (decathlon), Maria (volleyball) and Nina (gymnast). Her autobiography ‘The Rings of Destiny’ showcases the fact that the Olympic Games should not be a political platform but an arena of free exchange of human thoughts and values expressed through love which can only strengthen the ethos of the Olympic Movement.”

“The name Olga comes from Helga, a Scandinavian name meaning ‘Successful’ and Olga lived up to her name when she competed for Czechoslovakia in the discus event at the 1956 Summer Olympics in Melbourne, Australia. [...] The Czechoslovak contestants travelled to Melbourne with Air France. But because the officials feared that some of them might defect, they had to return on a Soviet ship ‘Gruzia’ that took them to Vladivostok. From there the Trans-Siberian Railway took them to Moscow and finally by plane to Prague. The whole journey took over a month and encompassed Christmas and New Year’s Day. [...] In September 1979 the US National Organization of Women issued a series of stamps honouring ‘Women who have shaped America’s history.’ Olga Fikotová-Connolly was featured on a 10c stamp.”

“Her homecoming was at the instigation of the Czech Olympic Committee, which reunited her with her Olympic teammates on November 29, 2006 in an emotional 50th anniversary ceremony in Valdštejnský palác. Her return brought back the memory of athletic grace and the Cold War love for a man that made her turn her back on her native land.”

Henrik Klemetz is our regular listener in Sweden:

“The mystery lady is Olga Fikotová, who was the cover girl of the illustrated Swedish weekly ‘Se’, issue 48, 1956. In this issue there was a feature article entitled: ‘The First Golden Girl. She beat the Russians’. There was more to come a few months later when she married Hal Connolly.”

Henrik also attached a scan of the magazine cover.

David Eldridge from England takes part in our competition every month:

“At the height of the U.S. war against Indochina in the early 1970's, she firmly opposed the war and was a member of a group called ‘Another Mother for Peace’. That was at a time when she was elected by her fellow athletes to carry the U.S. flag into the opening ceremony of the 1972 Games. [...] The reaction of the U.S. Olympic officials was to ‘fail’ to tell her about an opening ceremony rehearsal, almost causing her to lose her chance to carry the flag. The Committee suggested that the flag was too heavy for a woman to carry all the way around the stadium. That suggestion inspired her to carry the flag not only all the way around the stadium, but to do so with one hand.”

Charles Konecny from Ohio had this to say:

“She threw the discus farther than any other women and then threw the communist authorities for a ‘loop’ by wanting to marry the American. With two gold medal winners plus the political intrigue, it must have made for an interesting event. I understand that 30,000 people came to see the wedding in Prague.”

Thank you very much for taking part in our monthly quiz and taking the time to research the answer. The lucky four who can expect parcels from Radio Prague in the coming days are: Mark Guy, George Matusek, Bill Farmer and Jana Vaculik. Many thanks to all of you who took part this time and here is another chance to win a Radio Prague goodie bag:

This month we would like you to tell us the name of the first ever Czech to win an Olympic medal. Here’s a clue: it was at the 1900 Paris Olympics and he competed in the same discipline as Olga Fikotová, our April mystery lady.

Please, send us your answers by the end of May to english@radio.cz or Radio Prague, 12099 Prague. We’ll be looking forward to your answers. Until next week, happy listening. 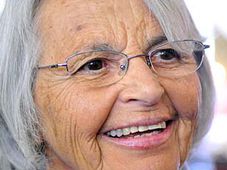 Olga Fikotová won gold in the discus at the Olympic Games in 1956, less than two years after taking up the discipline. At the Olympics…