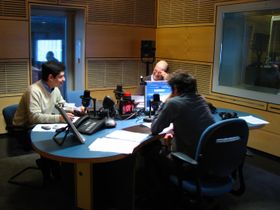 Hello and welcome to Mailbox, the programme for your views and comments. Before we get to your e-mails, though, I have one important announcement to make. After almost seven years on air, Insight Central Europe, a joint project of six Central European radio stations covering life and events in Central Europe, has this weekend come to an end. The project was launched in October 2001 by Radio Austria International in cooperation with Radio Polonia, Radio Prague, Radio Budapest, Radio Slovakia International and later joined by Radio Slovenia. Yesterday’s Insight Central Europe programme was the last, so from next week on, Radio Prague will broadcast its usual programme on Saturday on all frequencies.

Now on to your e-mails. We were surprised and delighted by your response to the 40th anniversary of the 1968 Warsaw Pact invasion of Czechoslovakia and Radio Prague’s programmes marking the anniversary. Many of you wrote to tell us you listened to Radio Prague broadcasts in the days immediately following the invasion. Even though it is now ten days after the anniversary, let us quote from some of your fascinating e-mails. 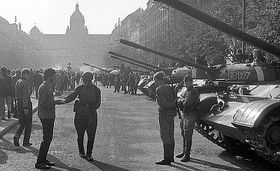 Photo: Archives of Pavel Macháček Roger Tidy from the UK is a longtime listener:

“I was one of the many listeners around the world who followed your broadcasts during the Prague Spring and during the period of clandestine broadcasts from August 21 1968 onwards... I had developed a great interest in, and respect for, Czechoslovakia through your broadcasts and when I heard that the Soviets had invaded your country it felt almost as if I myself had been attacked. ...I spent much of the day searching for any broadcast I could pick up from Czechoslovakia and remember hearing a broadcast on the evening of August 21, on medium-wave, in which George Hara, one of your regular announcers, was giving the news in English as it came in from the CTK news agency (he apologised for any slips of the tongue because, he said, he was translating straight from the Czech). 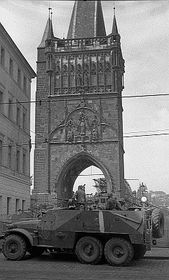 Photo: Archives of Pavel Macháček “That was a very sombre broadcast and only lasted for about ten minutes, after which there were broadcasts in other languages. From August 22 onwards I managed to pick up your clandestine broadcasts on shortwave. After the invasion, and during the period of so-called normalisation, I was saddened by the fact that many familiar voices had disappeared. In particular I remember Karl Greggor, of the North American Service, and an announcer called Ruth on the British Isles Service. Another of my favourite announcers, Jean Nováková, subsequently disappeared from the air.”

Andrew J Popper also mentions Jean Nováková in his e-mail. As a student he visited Prague in 1967:

“The highlight of my trip was a visit to your station where I had a long conversation with Marta Trojanová. I was disappointed that I never had the chance to meet Jean Nováková who was in Montreal at the world’s fair... I was ecstatic to hear the amazing broadcasts from your station the following year, though, at first I mistrusted Dubček... The polemics between Radio Prague and Radio Moscow were terrifying and I feared for the safety of friends I had met... One of the letters I wrote to you was answered with the statement ‘the Russians are our friends, they would never attack us’. That was around the 18th of August. On August 23 I was listening on 7.345 and heard a broadcast in Czech and assumed it was by the occupiers but suddenly I heard a voice in English saying ‘Please stand by, we will be back in ten minutes.’

“I set up my tape recorder immediately. I told everyone in the room this is going to be important. That is Jean Nováková and she would never be a traitor. She returned and denounced the invasion and occupation. I still have that recording... I am very glad that your country is now free, democratic and prosperous, but feel very sorry for the poor Georgians left to fight alone against the Russian Bear... Congratulations on being able to make that excellent anniversary broadcast. I wish Alexander Dubček were still alive to enjoy your liberty.”

On the day of the anniversary, Steven R. Lare from Michigan wrote:

“I 'm currently listening to your program about the 40th anniversary of the Soviet invasion on 13580 at 1300. Thanks so much for having this program on. I was listening to Radio Prague 40 years ago.”

Stephen Hrebenach from Ohio also listened to the anniversary broadcast: 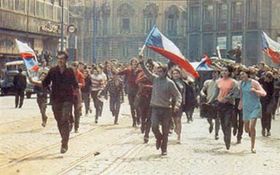 Prague in August 1968 “Radio Prague has upheld the high standards us listeners have come to expect with your coverage of the 40th anniversary of the Soviet invasion, especially with the entire program on 21 August. I was so captivated that I listened to that broadcast twice, just to make sure that I did not miss anything.”

Many thanks to all of you who listened to the programme, from Egypt, to India, to North America, and shared your thoughts with us and other listeners around the globe. Your letters are always welcomed, whether they concern Radio Prague broadcasts or life in the Czech Republic in general. You can send us e-mails to english@radio.cz or letters to Radio Prague, 12099 Prague. Mailbox will be back next Sunday, same time, same frequency. Good-bye.