Welcome to Mailbox in 2009. Today is the time to reveal the identity of December’s mystery Czech. Again, the situation was a little more complex than it might have seemed at first, as

“December’s mystery person needs careful treatment in answering. Human blood groups were first classified by Karl Landsteiner, an Austrian biologist and physician in 1901 for which he was awarded the Nobel Prize in Physiology or Medicine in 1930... It was Landsteiner that introduced the A, B and O group classifications, but Prof. MUDr. Jan Janský, a Czech serologist, neurologist and psychiatrist working independently in 1907 at a psychiatric clinic in Prague was first to classify blood into today’s four groups. Janský called the groups I, II, III and IV, the nomenclature still used in Russia and some other former Soviet states. Elsewhere Janský‘s classifications were renamed A, B, AB and O under Landsteiner’s ABO blood group system.”

Jayanta Chakrabarty from India is another regular listener:

“As it mostly happens with great discoveries, Janský's outstanding achievement went unnoticed for 14 long years until 1921 when it was acknowledged as a great medical feat by the North American Medical Commission. It is unfortunate that Janský missed out on his most deserving case of being awarded the Nobel Prize in Medicine to Karl Landsteiner... By being an ardent proponent of voluntary blood donation, Jan Jánský has also reflected his humanitarian aspect. Truly Janský is an outstanding ambassador in Czech medical sciences.”

Also from India, this is what K.Thiagarajan wrote:

“Jan Janský was born in 1873, a graduate of medicine from Charles University, he initially specialised in Neurology and Psychiatry. Later he concentrated on the subject of mental illness and how it relates with the composition of the blood. Historical records revealed that he had collected more than 3000 blood samples.”

“The mystery person is Dr. Jan Janský. He was a professor of medicine, a serologist, a neurologist and a psychiatrist at the same time... Though he lived for only 48 years, he was able to blaze some medical trails which served as a benchmark for subsequent researches and researchers.”

“Although he failed to get acclaim for his discovery before he passed away, he is not entirely forgotten, today Czech blood donors are awarded a Janský medal for outstanding contributions.”

“His 1907 classification of blood into the 4 types (A, B, AB, O) of the ABO blood group system became so successful, and has remained in use to date – well over those of either Karl Landsteiner or William Lorenzo Moss. Modern medicine, especially blood transfusion owes so much to Janský as an individual and the Czech Republic as a nation.”

“As a regular listener of Radio Praque I heard also that blood donors in your country are awarded the Janský medal.”

Sara-Anne Peterson tunes in to Radio Prague in the middle of the night in Canada:

“The doctor who first classified human blood group types was Dr. Jan Janský a professor at Charles University in Prague. He published his study in 1907. His work led to safe blood transfusions for people everywhere.”

“Janský made in 1910 the first description of rare, inherited metabolic, autosomal dominant disorder: Jansky-Bielschowsky disease, reporting a family with this condition... Jansky was a proponent of voluntary blood donations... In 1953 Martin Frič directed a film ‘Tajemství krve’ based on the story of Jansky's life with Vladimír Ráž playing Jan Janský...”

“The name of the Czech doctor is Jan Janský. He examined the coagulability of the blood of psychiatric patients. He discovered the four basic blood groups now known as A, B, AB and O. Janský was born in 1873 and died in 1921 but his work will never die.”

Henrik Klemetz is our regular listener from Sweden:

“Once again my Radio Prague QSL collection has come in handy. A verification card in the 2006 series called ‘Czech scientists and inventors’ depicts the mystery man of this month, Jan Janský. The explanatory text on the reverse side of the QSL says, ‘Jan Janský (1873-1921), doctor. In 1907, when examining the coagulability of the blood of psychiatric patients, he discovered the four basic blood groups, now known as A, B, AB and O.’" 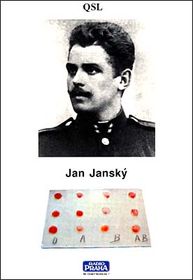 “Janský made a very significant find when he established the fourth blood group. Among other things, it cleared up confusion in blood transfusions where things did not always go well. If I ever need a blood transfusion, I will thank Jan Janský for his work in identifying blood types.”

Yukiko Tsuji-Maki from Japan included a couple of questions in her answer:

The A group is the most common one in the Czech population, followed by O, B, and AB being the least common. I haven’t heard about people’s characters being judged by their blood group but I have noticed on the internet various diet recommendations based on people’s blood groups. Paul R Peacock lives in Australia:

“During World War One Janský spent two years at the front as a doctor until a heart attack disabled him. In the town of Černošice there is a commemorative plaque on his small villa, where he would devote himself to the garden as a leisure pastime.”

“Karl Landsteiner, an Austrian, had published a paper on blood groups in 1901, in 1901, but he didn't know about the AB group. He revised his work in 1909 to include Janský's four groups and won the Nobel Prize his work. Nevertheless it was Jan Janský who first discovered the four group system. In 1921 an American medical commission acknowledged Janský's classification. Janský's classification remains in use today. A similar classification was described by William Lorenzo Moss, but the groups I and IV of Moss were the opposite to those of Janský, leading to confusion in blood transfusion until the use of A, B and O became standard.”

Again, thank you for the multitude of correct answers and we appreciate that you devoted your time to writing and researching them even though many of you were very busy preparing for the festive season. Thank you also for the lovely Christmas and New Year’s greetings and even photos you included in your answers.

The four of our listeners who will receive small gifts from Radio Prague this time are: Anne Faust from Germany, Sara-Anne Peterson from Canada, Gautam Kumar Sharma from India and Henrik Klemetz from Sweden. Congratulations! If you haven’t been picked out of the hat this time, please don’t give up as a new quiz question follows:

This month’s mystery person was born on January 5, 1931 in the eastern town of Loučná nad Desnou but has lived in other countries for most of his life. He is considered to be one of the world’s greatest classical pianists. Last month he gave his last public performance after a concert career of sixty years.

Please send us your answers to Radio Prague, 12099 Prague or to english@radio.cz by the end of January. Thanks for tuning in today and until next week, bye-bye.